This was a VERY good adaptation of S&S, BUT it didn’t blow me away like Jane Eyre (2006) or North and South.  The music was very tasteful, and the locations were cool (very much “out of the box thinking” from the production team).  I felt that Hattie Morahan was a pitch-perfect Elinor: stately, sedate, serious, but very bright as well!  Her tall stature and classic Brit features also added to her fitting-in w/ JA’s world.  The girls’ everyday costumes were not as nice/elegant as in the Ang Lee version, but that didn’t bug me too much. 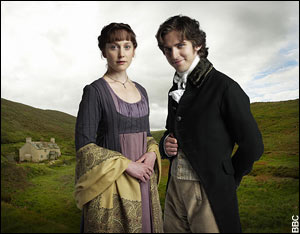 Edward was VERY different from the book- no doubt to appeal to modern/younger viewers.  He was the best-looking guy in the entire film- LOL!  In the book, Edward barely even speaks b/c he’s so low-key.  In the film, Dan Stevens (the actor) is so sweet, engaging, and (later on) emotional.  He had VERY good chemistry with Hattie!  It was like love at first site in the film.

Marianne kinda grew on me; I liked her as she matured w/in the story.  In the start, she was like a modern teenager (wanted to be crazy in love, worried re: clothes, and acted w/o thinking).  She was good in the vulnerable scenes (w/ her big eyes, curls, and very small build).  If you think about it, she and Col. Brandon are the “perfect” pair…  He is wealthy, w/ an adventurous past, love of music, and a very romantic heart.  She is an accomplished musician, full of passion, w/ an independent spirit.  I liked how this film showed their courtship before the arrival of Willoughby.  “He’s the only one one can have an intelligent conversation with,” Marianne tells her mom and sisters in one scene.

Of course, no one can replace the awesome job Alan Rickman did w/ Col. Brandon… BUT David Morrissey did a PRETTY good job here!  He thinks he’s too old, too heatbroken, and not handsome enough for Marianne (at first).  But he keeps an eye on her, as a very loyal friend, even when she’s head over heels for Willoughby.  I LOVE when he catches her as she faints in the London ball!  The little scene he had w/ Eliza’s daughter and her baby was very sweet.

What stood out to me were the (extension of) men’s roles.  Willoughby was more troubled/darker than in Ang Lee’s film, but his scenes after the break-up were quite strong.  You could tell he was suffering a LOT at those times.  There are things dramatized that were only hinted in the book; I esp. liked the swordfighting part!  Margaret was a clever, funny child who said things the grown-ups could not; her acting was natural.  I would recommend this to any JA fan!