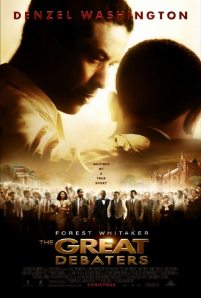 Denzel Washington obviously enjoyed making this film, although he admitted on Oprah last November that “I didn’t want to be in the film.”  He wanted to direct The Great Debaters only, but the studio would not give him the funds without him in the starring role.  What Oprah, Denzel, and their cast and crew have made is a nicely-paced, engaging, and overall well-executed film.  Viewers of all ages will find something to connect to here.  The editing, music, cinematography, costumes, and (most importantly) acting are top-notch!

As Denzel said many times, the real stars are the three (very talented) young African-American actors who portray the college debaters: Nate Parker, Jurnee Smolett, and Denzel Whitaker (yes, that’s his REAL name).  Nate Parker (Henry Lowe) is a gifted, but troubled, young man who drifts in and out of school.  He loves to read, and his natural talent is nurtured by Denzel’s character (Dr. Melvin Tolson).  Jurnee Smolett (Samantha Booke) is a strong, beautiful young woman who transfers to Wiley College (a small Methodist university in Marshall, Texas) JUST to try out for the debate team.  (As a child actor, Jurnee had a recurring role on TV series Full House and played Eve in the critically-acclaimed film Eve’s Bayou.)  The 1930s period costumes look especially gorgeous on her tall, lean frame.  The youngest member of the team is Denzel Whitaker (James Farmer Jr.) who is 14, curious, eager to please, and very easy to relate to. There is a cute fantasy dance sequence with James and Samantha reminiscent of Spike Lee.  (Denzel and Spike worked together on several movies.)

Forest Whitaker also has the role of serious, quiet, theology professor (Dr. James Farmer).  He’s a well-respected man who speaks 7 languages, but has a difficult time connecting to his teen son, James Jr.  He pulls off this role with understatement because that is what was needed for such a character- someone who is forced to keep emotions in check so he doesn’t “rock the boat” in his segregated community.  On the opposite side of Dr. Farmer is Dr. Tolson (who was also a published poet); he was accused of being a Communist on occasion.  Dr. Tolson seeks not only to educate the kids at Wiley, he secretly works to organize the sharecroppers in the area (black AND white).  This puts him at odds with the local sheriff (John Heard) who fears unionizing.

What I liked best about this film was the enthusiasm and energy of Denzel and the young debators (even the small characters).  It seems like everyone really got into their roles; most of the main characters are based on real people.  The people in the story are ONLY ONE generation removed from slavery.  While the students seek to educate their minds on the college campus, they are NOT removed from the social injustices their community faces off-campus. Denzel interviewed former students of Wiley (see Special Features on the DVD).  The Great Debaters also introduces young audience members to great writers of the past: Langston Hughes, Countee Cullen, Gwendolyn Bennett, W.E.B. DuBois, Henry David Thoreau, and Gandhi (in the last debate, the team takes on the issue of civil disobedience).  Check out The Great Debaters!