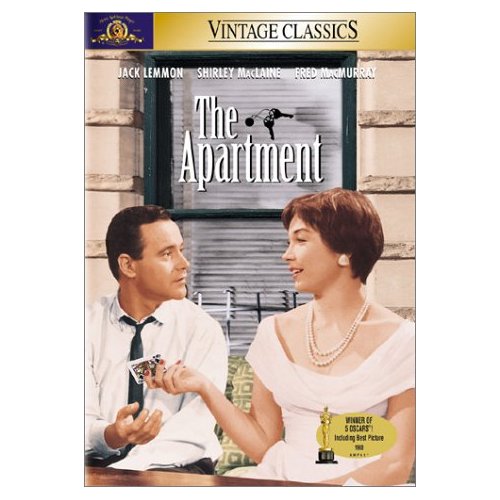 Before last week, I never knew about this terrific comedy film by famed director Billy Wilder.  I picked it up from The Strand bookstore in Union Square because I absolutely loved Jack Lemmon (and co-star Tony Curtis) in Some Like It Hot.  The Apartment won 5 Oscars in 1960, including the most-coveted one, Best Picture!  The stars of this (black and white) film are Jack Lemmon, Shirley MacLaine, and Fred MacMurray.  Unlike Some Like It Hot (another Wilder comedy where the main characters dress in drag to escape the mob), The Apartment is a more serious, true-to-life type of comedy.

There are light and dark moments relating to ambition and romantic relationships, among other themes.  Jack Lemmon plays C.C. (Bud) Baxter, a single, ordinary “nebbish” (as his neighbor says) working for a huge insurance company in NYC.  But Bud has an advantage over his co-workers- he’s renting out his apartment to four men (working above him in different divisions) who want a little “ring-a-ding-ding” outside their marriages.  These guys, including a hilarious young Ray Walston (known to modern audiences from his serious TV roles), say this will put Bud on the fast track to success.  Bud has no problem with them having fun on the side, until it hits him personally.

The audience can clearly see that Bud has an interest in one of the elevator operators in his office building, Fran Kubelik (a very young Shirley MacLaine).  He thinks she’s “a nice decent girl” and goes out of his way to compliment and chat with her whenever he can.  When he gets a big promotion, he asks her out on a date to the theater.  He got free theater tickets from the head of personnel, Mr. Sheldrake (Fred MacMurray).  But things are not as they seem with the sweet, friendly Ms. Kubelik.

I’m not going to reveal more about the plot of The Apartment, because I want you all to discover the surprises on your own.  Jack Lemmon does a great job in this film- he can convey conflicting emotions with subtlety.  He can do physical comedy, and his eyes are very expressive.  Shirley MacLaine will remind you of Renee Zellweger; she can be vulnerable and tough.  Young single, working women will relate to the character of Fran (at certain points in the film).  Fran wants to be loved, but keeps falling for the wrong kind of men.  This is a must-see film for anyone looking for a smart, thoughtful comedy!