There is a pervading sadness to the movie, like a memory of something wonderful that could have been, that should have been, that almost was, and is all the more tragic because it was in your hands but slipped through your fingers. This is not a movie for everyone, but if you believe that film can be one of the highest forms of art, this is the film to see.

What is it really about?  Fleeting beauty. There aren’t any random shots in the film at all, each frame and edit is a word or period for thought and mood. What joys and disappointments to be found in life. The churning machines, the lighting, the chatter, the dialogue-free actions…

This is a very visually engaging and beautiful film that came out in 1978.  It was directed by Terrence Malick (mostly known for The Thin Red Line and The New World).  If you know his work, don’t worry, this movie is not overly long (only 94 minutes) and languorous!  The acting is subtle and the dialogue is simple, but you’ll be drawn in by the hopeful young characters and the natural beauty around them.  Oh, and the characters are beautiful, too!

In the opening, Bill (Richard Gere- young and very striking), his girlfriend Abby (Brooke Adams- also youthful, but bright; wife of multi-talented Tony Shalhoub), and Bill’s pre-teen sister Linda (the narrator) are struggling to get by in pre-WWI Chicago.
Bill, who has a short temper, gets into a fight (for no apparent reason) with an older man at his job; he unwittingly kills the man.  The self-made family travel (via train) to work on a wheat farm (during harvest time) in the Texas panhandle.  Bill and Abby, who are deeply in love and very comfortable with each other, pose as brother and sister in order to prevent “talk” about them. 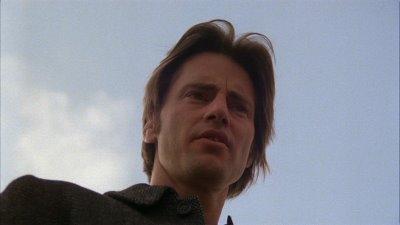 The Farmer (Sam Shepard- also a noted playwright; I think he resembled Viggo Mortensen as a young man) is wealthy, but looks sad and lives alone in his huge house (no relatives; single).  He becomes interested in Abby; Brooke Adams’ beauty is in her large expressive eyes.  The Farmer asks another employee about Abby, then one day, gathers up courage to speak to her.  After harvest, he suggests that she stay on to work on his farm.  The work would be easier, and it would be a more stable life.

When Abby mentions this idea to Bill, he doesn’t get jealous.  Bill overheard the doctor saying The Farmer doesn’t have long to live.  The family becomes friendly with the lonely man.  Very soon, we realize that The Farmer is in love with Abby.  The Farmer, who is kind and gentle, could give Abby a financially secure life.  But what will happen after she decides to marry The Farmer?  Will Bill be able to handle it?  (It’s not easy to be part of a love traingle!)

I really like the shot below because it shows the harshness of their lives, though they are beautiful and young.

The last 30 minutes are very interesting; the action picks up a lot!  Sam Shepard suits the role of a farmer very well with his tall, lean build and shy, quiet demeanor.  His character is easy to sympathize with!  Brooke Adams and Richard Gere look comfortable doing the hard labor of farmwork.  Gere grew up on a small farm in upstate New York.  You can believe that Abby and Bill are a loving couple, but their relationship is not (totally) secure.  I found her to be a very watcheable character.  It’s too bad that there wasn’t more dialogue- that’s what I like best in films.  However, you could see the conflict in the characters’ eyes, faces, body language.

Check out this film when you’re in a reflective mood, or looking for something different from the ordinary.

One thought on “Movie Review: “Days of Heaven””