This young lady (Emily Bronte) wrote one of the most scandalous books of her time!  (Some consider it a pretty outrageous book in our time, too.)  She was the daughter of a clergyman, rarely left home, never married, and died at age 30.

Here is a portrait of Emily painted by her older brother, Bramwell.  Many literary experts think that Bramwell was the inspiration for the charater of Heathcliff.  Bramwell was much more a person of the world than his sisters (Charlotte, Emily and Anne); he was said to have a hot temper, drink heavily, and gamble.

Emily’s Heathcliff, unlike Charlotte’s Mr. Rochester (Jane Eyre), is not merely a brooding romantic hero who can be turned around by a good woman.  Healthcliff is an anti-hero- more like a force of nature than a man.  When Cathy lies ill and pregnant in this latest ITV adaptation, she begs Nelly (the ever-loyal housekeeper) to throw open the windows.  She wants to feel the wind upon her- feel close to Heathcliff.

This adaptation is not very close to the book, but it has several strong points.  The music suits the mood of the story very well.  The use of unknown actors works well, as we have no preconceived notions of what we’ll see.  As characters changed over time, and the actors’ portrayals became more believable. 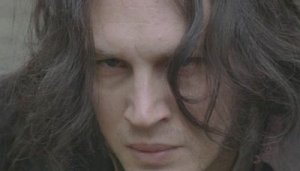 Tom Hardy, though not conventionally handsome, makes an excellent Heathcliff.  This Healthcliff is “very changeable” (like Mr. Rochester), but filled to the brim w/ rage.  Hardy is somehow able to make the audience feel some empathy with him at crucial times in the story.  I especially enjoyed these scenes: Heathcliff coming to tea after Cathy and Edgar Linton’s marriage, confronting her on the moors after she’s been w/ Edgar, and holding/comforting the nearly-dead Cathy at the crag.

Tom Hardy does a lot of acting with his eyes and facial expressions, as Healthcliff is a mysterious man.  But he’s also able to say the dialogue with conviction.  The low/deep voice he uses makes you lean forward and pay attention.  He created good chemistry with Cathy (Charlotte Riley), but I felt he was a much stronger actor.  He’s older and has had much more experience.  (While I watched him, I thought of Gene Hackman, another actor who is very masculine, intense, and able to stay in the moment.)

Burn Gorman, an actor you may’ve seen in Bleak House, did a terrific job as the depressed, unstable, and alcoholic Hindley.  The young lady who played little Catherine (Cathy’s daughter) did very well also; she was full of her mother’s curiosity and energy.  Edgar was handsome, likeable, but weak (as in the book).

There were many things different from Bronte’s book, most notably Healthcliff shooting himself.  Also, no one mentions that Healthcilff might be Mr. Earnshaw’s son by a Liverpool whore.  There is no way to be certain that he and Cathy “hooked up” at the crag (as plainly shown/said in Part I).  Could it have happened?  As my mom said- yes, but people didn’t state these things explicitly then.   Heathcliff doesn’t physically abuse wife Isabella, though he says hurtful things and neglects her.

What didn’t work was the scene where Cathy confesses to Nelly her feelings for both Edgar and Heathcliff.  The actress didn’t put too much emphasis on these important lines.  Before he rode off, Healthcliff was supposed to hear part of her speech (Edgar wants to marry her, it would degrade her to marry a “servant”, and so on.)  But in this film, Healthcliff goes off while she starts talking about Edgar.  Too bad- missed opportunity for the director!

Ultimately, Heathcliff and Cathy’s love was obsessive and destructive.  Cathy was torn between Heathcliff (passion/uncertainty) and Edgar (wealth/respectability).  Because of his tortured past, Heathcliff was “more full of hate than love,” as Cathy says.  He wanted revenge so badly that he nearly destroyed the younger generation.  When he came back a rich gentleman, Healthcliff was unable to rid himself of his emotional baggage.  He was his own worst enemy!