Are we all ready for MORE Paul Newman?  He’s not a straight-shooting hero in this picture- he’s immoral, ambitious, and even… desperate.  He still looks SUPER-HOT!

I saw this film last week on TCM; it’s based on a Tennessee Williams play, but not as well-known as say A Streetcar Named Desire, Cat on aHot Tin Roof, or The Glass Menagerie.  This film is a MUST-SEE for anyone who likes snappy dialogue, complex characters, and SMART classic stuff!

Chance Wade (Paul Newman) drives into his little hometown (a tropical Southern locale near the sea) with drunken/depressed actress Alexandra Del Lago (Broadway star Geraldine Page).  At a large/fancy hotel, he checks her in as “Princess.”  He has to carry her up to the room; the staff starts to gossip about them (of course).  Then Chance sets off to locate his boyhood love, Heavenly Finley (a very blonde and thin Shirley Knight; you may’ve seen her in As Good As It Gets).

But getting together w/ Heavenly is NOT easy; her father Boss Finley (a wealthy/powerful politician) keeps tabs on her every move.  Her older brother Tom (Rip Torn- back then he didn’t have red hair) is a violent thug in a suit.  Heavenly’s maiden aunt is the only sympathetic one in the bunch.  Even the servants on the Finley estate warn Chance to stay away. 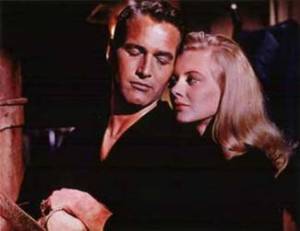 We learn (via flashbacks) that Chance was very friendly with the Finleys growing up.  He and Waverly fell in love, and planned to marry.  But her father had other ideas…

Chance: I had my picture on the cover of Life magazine! Woo-ha!  And at the same time I was… employing my other talent…

Why is Chance with Princess if he STILL can’t forget Heavenly?  What does he want from her?

Chance: I like you. You are a nice monster.

I pondered on these questions as I watched:

Why do we find it odd when men use their handsome faces/great bodies to get ahead?

Why can’t women be in charge of their own bodies?

How does aging affect women, particularly beautiful ones?

How/why is a daughter’s behavior tied to family honor?

Chance: This is pretty high-class pot. Where’d you get it?
Alexandra: You beautiful, stupid young man. That is not pot.  It’s hashish, Moroccan, and the finest.

Yes, they’re talking about drugs.  This movie deals w/ difficult ADULT matters; it’s NOT a feel-good film.  But you definitely MUST check it out!

Best to all, EMMA.