but I’m in a LOUSY mood! 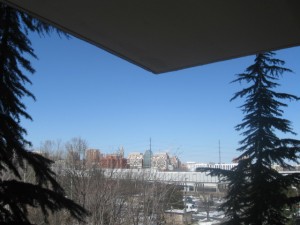 I heard MANY DC ppl didn’t go to work yesterday!

I had to be careful where I went because I was a Jew, because I was young and because I was handsome. It made me wiry and erratic and paranoid, which is what I still am. Always on guard.  –Tony Curtis

Two gorgeous guys in tights- what’s not to like?  This film stars Burt Lancaster (gymnastics kept him off the streets as a kid) and Tony Curtis (who didn’t have the required skills at first, but was very enthusiastic).  Curtis’ willingness to learn impressed Lancaster very much.  The two men did most of their own stunts in this film- wow!

This classic pic is set in Paris, and focuses on the working relationship and friendship btwn an older, injured former trapeze star Mike Ribble (Lancaster) and his energetic, young protege Tino Orsini (Curtis).  Tino came all the way from NYC to learn a difficult/dangerous trick on the trapeze (that only Mike can teach him).  But an ambitious/manipulative  young woman, Lola, also in the circus, has her eyes on Tino. 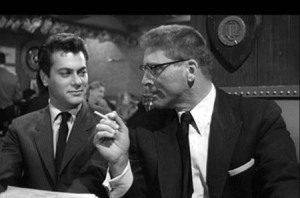 Tony Curtis has always been an actor who has refused to play it safe, and has devoted his working life to performing in a vast array of characters… Yet what stands out about all his performances in the inner vulnerability and humility he finds in his unsympathetic characters and the never-say-die attitude of the heroes he plays.  -IMDB bio

Life is to be lived within the limits of your knowledge and within the concept of what you would like to see yourself to be.  –Burt Lancaster

Another pic w/ Lancaster & Curtis, BUT there are few nice guys here!  J.J. Hunsecker (Lancaster) is a powerful, much-feared gossip columnist.  He doesn’t feel guilty about ruining careers, marraiges, and his sensitive little sister’s budding romance.  (You can see the blemishes on Lancaster’s skin in this film; that suits the flawed character he plays.)  Sidney Falco (Curtis) is his ruthlessly ambitious publicist.  Friends worry that working w/ J.J. has corrupted Sid.  Just how far will Sid go to get a taste of success?

This is a very thought-provoking ensemble fim based on a successful Broadway play; a young Denzel Washington playing a key role here.  It’s set in a Southern army camp during WWII; soldiers were segregated by race at that time.  They spent a lot of time playing baseball (many hailed from the Negro Leangue), waiting for a chance to fight.  The recruits may have clashing personalities, but they share a hatred of their drill instructor, Sgt. Waters (Adolph Caesar). 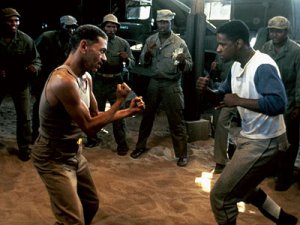 Though Waters is black, too, he is very hard on his men.  His moods go up, down, and every which way.  Waters is not hesitant to use the “n” word to refer to those men he sits as “bad for the race.”  Waters takes no excuses from anyone, so no recruit is too upset when he meets w/ a mysterious death.  The white officers are worried, however, and call for assistance from Washington.

Washington sends down Capt. Davenport (Howard Rollins from the TV series In the Heat of the Night); he’s a black officer/lawyer.  It’s not an easy case- Davenport quickly discovers.  The rag-tag group of recruits do a double take when they see an articulate/strong black officer, and the white officers fear that Davenport is the wrong man for the job.  “Folks around here won’t talk to you!” an older white officer exclaims.  But Davenport remains calm and professional, determined to find the truth.

– Burt Lancaster turned down the lead in Ben Hur (and the $1 million salary) b/c he thought it would be awful.  He set up his own production company (rare for an actor of his time) to do his own projects.

– Both Lancaster and Tony Curtis are native New Yorkers.  Who can mistake Curtis’ strong Bronx accent?

– Lancaster admitted to being nervous when working w/ Montgomert Clift in From Here to Eternity:

The only time I was ever really afraid as an actor was that first scene with Clift. It was my scene, understand: I was the sergeant, I gave the orders, he was just a private under me. Well, when we started, I couldn’t stop my knees from shaking. I thought they might have to stop because my trembling would show. I was afraid he was going to blow me right off the screen.