No character is one-dimensional in this miniseries (adapted from Elizabeth Gaskell’s novel) except the elegant and self-absorbed Mrs. Kirkpatrick (Francesca Annis).  A respectable and hard-working Scotsman, Dr. Gibson (Bill Paterson), marries the social-climbing former governess after living many years as a widower.  This surprises his devoted 17 y.o. daughter, Molly (Justine Waddell), and his friends/neighbors in their small southern English town.  Hyacinth Kirkpatrick has a daughter a bit older than Molly- Cynthia (Keeley Hawes).

Though close in age, girl-next-door Molly is a total contrast to vivacious Cynthia.  When Cynthia arrives, “it’s as if Marilyn Monroe is has come to town,” comments Hawes on the special features of the DVD set.  Despite their obvious differences, the teen girls become good friends.  Cynthia and her mother don’t see eye-to-eye.   The new Mrs. Gibson doesn’ t want the girls to be “out” in society w/ those who are “course” to her eyes.

Molly is upset by her step-mother’s snobbish behavior.  She’s very close to the Hamleys, an unpretentious/good-hearted family in the neighborhood.  Squire Hamley (Michael Gambon) doesn’t have posh manners; he’s a country farmer who speaks with a broad local accent.  His well-born wife, Mrs. Hamley (Penelope Wilton), is very kind to Molly.  Both ladies are avid readers. 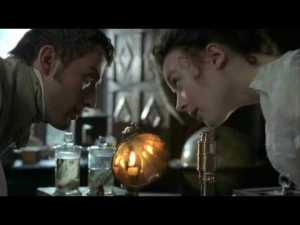 The Hamleys have two sons in their 20s, poetry-writing Osborne (Tom Hollander) and scientific Roger (Anthony Howell).  Molly thinks Osborne sounds very interesting at first, but becomes good friends with Roger.  She even becomes interested in his research.  But when Roger spies Cynthia, his passionate side comes out!

At the center of the story is the wonderful father-daughter relationship between the warm-hearted, yet protective, Dr. Gibson and Molly.  “I think she [Gaskell] got that right- the Scotsman,” comments Paterson (who is Scottish).  They have been on their own for so long, you can feel for Molly when a new woman enters the scene!  But the main reason Dr. Gibson remarried was to give Molly a mother.

Molly, like her father, is very concerned for her neighbors and speaks her mind.  Dr. Gibson rides off to see his patients at all hours; Molly checks in on the Hamleys when they’re having troubles.

Though this is a Victorian story, there are dark undercurrents present.  The seemingly carefree Cynthia shares a secret with a handsome/mysterious land manager, Mr. Preston (Iain Glen).  Molly is puzzled by Cynthia’s strange reaction when he makes a social call at their house.  Her stepmother shares a past with Mr. Preston, some of the local gossips remark.

Gaskell recognized that men and women (even in a quite conservative/corset-bound society) could become friends and share common interests.  Molly and Roger are both caring, observant, and intellectually curious individuals.  Out of such a friendship, a romance may develop.  These days, don’t many people hope to marry their best friend?