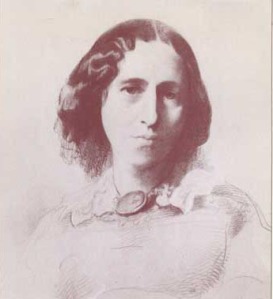 Marian Evans (pen name: George Eliot) grew up in the country, then went to the city to further her career.  The focus of her writing was often on small town outsiders, such as herself.   In her early 30s, Eliot began a long-term relationship w/ an older married man, George Henry Lewes.  He was a noted philosopher/critic who had an open marriage.  Eliot’s decision to defy the conventions of Victorian England created a bitter rift between her and her older brother, Isaac,  for most of their lives.  This conflict is at the core of her most personal novel, The Mill on the Floss, published in 1860.

The Tulliver family, headed by the strong-willed Edward (Bernard Hill) has owned/managed their mill along the River Floss for generations.   Mrs. Tulliver comes from a wealthier background, so her sisters look down on her marriage to Edward.  The family has two kids, very close in age, though different in temperment.

Eliot’s father, like Mr. Tulliver, was a businessman who had married a woman from a higher social class. His wife’s sisters were rich, ultra-respectable, and self-satisfied. These maternal aunts provided the character models for the aunts in the novel.

Mr. Tulliver decides that Tom, as the only son, should have a better future than he did.  He’s sent off to study with a local parson as an adolescent, much to the dismay of sister Maggie.  As one reader of the novel commented: “her fierce intelligence and strong streak of independence bring her into constant conflict with her family.”  Maggie seeks the love and approval of Tom, even when he treats her harshly.

At the parsonage, Tom studies alongside Phillip Wakem, the only son of the cold-hearted lawyer who’s trying to take over the land/water around the Tulliver mill.  Phillip, who is hunchbacked, is a kind boy who draws, sings, and plays the violin.  When Maggie visits, she and Phillip become fast friends.  Though their fathers despise each other, Maggie tells to Tom that “bad men can have good sons.”

Seven years later, the young adult Tom (Ifan Meredith) leaves school and gets a job at a successful trading business in the village, Guest & Co.  He sets his mind to saving all he can in order to help the family mill, which is more in danger than ever.  Edward’s health is very poor; Mrs. Tulliver has borrowed all she can from her relations.

When Phillip (James Frain) returns from Europe, it gives Maggie (Emily Watson) a reason to smile.   They resume their friendship, meeting in secret to discuss books and ideas.   Like Maggie, Eliot was extremely intelligent, energetic, imaginative and unconventional.  In the book, Maggie is described as a “strikingly attractive young woman, tall with full lips, and a crown of jet black hair.”  We can see that Phillip is deeply in love w/ her.  Tom eventually forces Maggie to choose between the family and Phillip.

Then Maggie meets Stephen Guest, the handsome/easygoing fiance of her cousin, Lucy Deane.  Maggie’s lack of social pretension makes her very charming to Stephen, and he declares his love.   Maggie admits that she loves him, too. Can she fulfill herself while still being morally responsible?