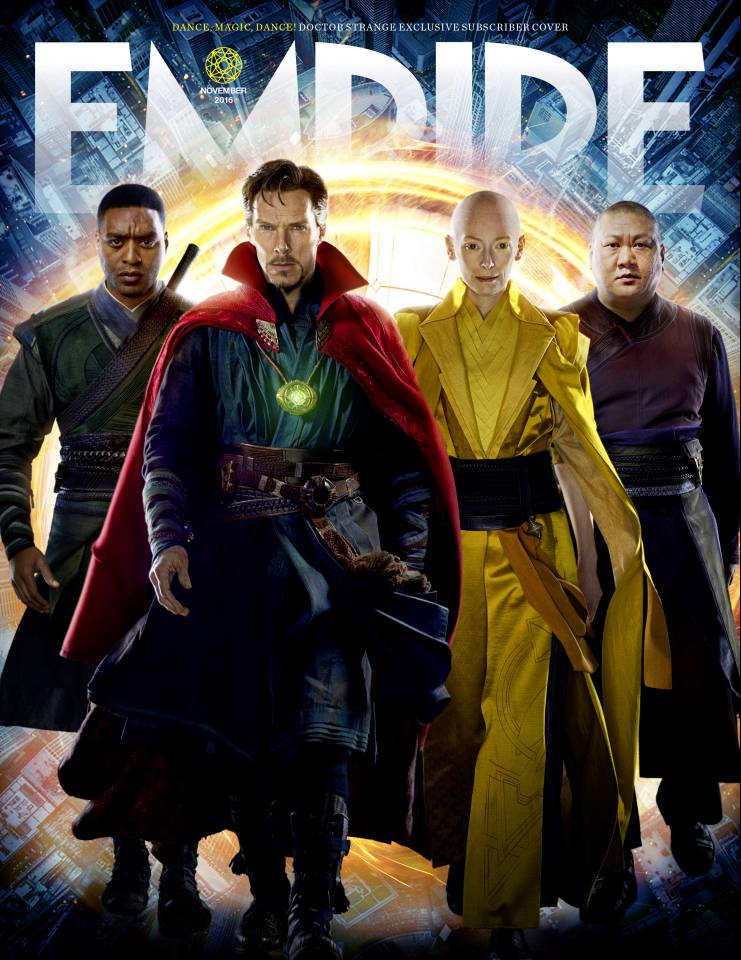 One of the first things I learned re: this film (via social media outlets) was re: the casting controversy of Tilda Swinton, which drew accusations of whitewashing, as the character is portrayed as a Tibetan man in the source material.  Director/writer Scott Derrickson wanted the Ancient One to be an Asian woman, but felt that it would be perceived as exploiting Asian fetish and “a fanboy’s dream girl.”  He decided to cast a non-Asian actor in the role, but to still take the opportunity to cast “an amazing actress in a male role.”  He thus wrote the role of the Ancient One especially for Swinton, feeling that she was the obvious choice for such a mystical and mysterious role. One proposed reason for the change is that a movie featuring a Tibetan character will not be acceptable in China (a very important foreign market). Hmmm… What do YOU think about this?

I’m very excited about that spiritual dimension. It’s something that’s been a huge part of my life. I meditate a lot, that’s a huge tool in trying to calm myself, get away from the crazy circus of it all, have a focused mind as well as be a kinder, considerate person in the world.  –Benedict Cumberbatch

The Batch was the MAIN draw for me (as well as  other non-comic book or regular Marvel fans)!  I was VERY interested when I found out he was cast.  It was cool to see Chiwetel Ejiofor (Mordo), as well as Benjamin Bratt (Jonathan Pangborn) from Law & Order.  Cumberbatch has an American accent for this role (which is quite good); his voice is deeper and his physicality is different (from what we’re used to seeing in previous roles).  He embarked on a strict training regimen by working w/ a personal trainer, drinking protein shakes and eating double his usual amount of calories.  Yes, there is a shirtless scene where we see the result.  On Jimmy Kimmell Live, Cumberbatch exclaimed: “I worked out for seven months!”

…the humour comes from the fact Strange thinks he can crack one liners but can’t.  It was meant to be awkward.  The audience I saw it with got that and were laughing away.  -IMDB reviewer

He tries to make a joke that almost intentionally falls flat, and the comedy is in the awkwardness (the non-reaction that he gets from people).  -Charlie, Emergency Awesome

It has a very psychedelic grounding, and most of the work is about other dimensions. –Ben Davis, cinematographer, re: Disney’s Fantasia (1940)- one of the visual influences for this film

In a time when special effects usually cover up for weak screenwriting, I think this is a film where the SFX are another character and actually help tell the story. -IMDB reviewer

Doctor Strange is “a solo origin story” (as Charlie, host of YouTube’s Emergency Awesome channel says in his review.)  I agree w/ him that there is “an underdeveloped villain” (Kaecilius, played by Mads Mikkelson), but “a great set-up.”  If you’re NOT a comic book fan, do go see it anyway, b/c ALL the actor’s performances are great!  Even though Rachel McAdams doesn’t have a BIG role, she does a good job here as Dr. Christine Palmer (who has a complicated relationship w/ Dr. Stephen Strange). As for Asian representation, that comes mainly in the form of British-Chinese actor Benedict Wong (recently seen in The Martian).  He is a librarian/warrior who is NOT amused by Strange’s jokes.