In post-WWII Buenos Aires, Argentina, petty American gambler Johnny Farrell (Glenn Ford) is rescued by wealthy businessman Ballin Mundson (George Macready).  In no time, Johnny becomes his “right-hand man,” managing his casino.  Why does Mudson help Johnny so much?  (Many critics pointed to the homoerotic dialogue and imagery in the first section of the film.)

Ballin goes to the US for a short time; when he returns, Johnny learns that his wife is an American dancer, Gilda (Rita Hayworth), Johnny’s former love.  We can tell that they had a bitter, nasty break-up.

When Gilda is brought back to Argentina by Tom, she slaps Johnny hard across both sides of his face. In reality, Rita Hayworth’s smacks broke two of Glenn Ford’s teeth. He held his place until the take was finished.   -IMDB

Gilda: If you’re worried about Johnny Farrell, don’t be.  I hate him!
Ballin: And he hates you.  That’s very apparent.  But hate can be a very exciting emotion.  Very exciting.  Haven’t you noticed that?

While her controlling, disinterested husband is busy running his hotel/casino and overseeing a tungsten cartel, Gilda is left to her own devices.  She buys beautiful, expensive things and openly flirts with several men, so Ballin decides to make Johnny her watchdog.  The younger man resents this position, and bites back at Gilda.  He stops her from fooling around with any men, delivering her to her husband’s mansion.

All of the goings-on of the place are observed by a lowly (yet wise) employee, Uncle Pio (Steven Geray).  He calls Johnny a “peasant” and has empathy for Gilda’s situation. There is a sub-plot involving former Nazis and a local detective.  To find out more, watch the film. 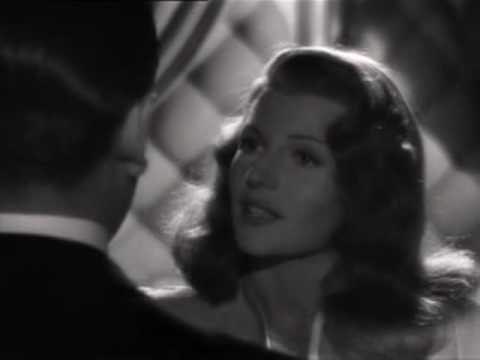 Johnny (to Gilda): What was that word?  It [decent] sounds funny coming from you.

This is an uneven film with a flimsy plot, but it’s also well-loved by many viewers.  It packs a punch because of the presence of the gorgeous femme fatale and the (almost palpable) chemistry between Hayworth and Ford.  If you’re interested in the themes explored in this film, check out Separate Tables (starring Hayworth, Burt Lancaster, Deborah Kerr, & David Niven) and The Lady from Shanghai (starring Hayworth and Welles).  I need to check out more movies with Ford; so far, I’ve seen 3:10 to Yuma, The Fastest Gun Alive, and The Courtship of Eddie’s Father.

Only Angels Have Wings (1939) – This was the first movie role for teenaged Margarita Cansino (Rita Hayworth), a dancer since the age of 4.  The film stars Cary Grant and Jean Arthur. 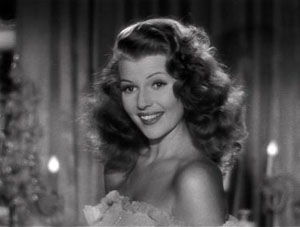 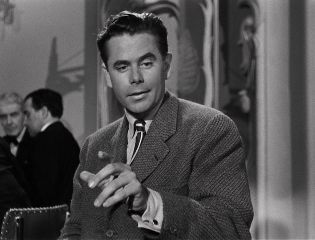 Gilda (1946) – This film pairs Hayworth with the subtle/talented Glenn Ford- sparks fly!  I saw this film recently, but need to see it again to get all the nuances.  This role made Hayworth a star, and created the bombshell image that was so opposite from her real persona (a shy woman who wanted a quiet, secure family life). 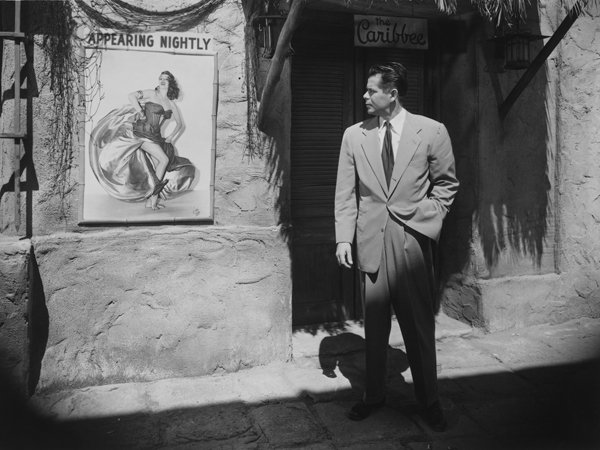 Affair in Trinidad (1952) – Another film w/ Ford that served as a comeback for Hayworth; she produced it herself.

Yes, this is Angelina Jolie’s movie (her directorial debut), but don’t let that put you off- it’s quite a tale!  There are no flashy directorial moves, and the pace can seem slow, but I feel the subject matter is worth a look.  However, if you are a sensitive person, this is not the film for you!  (FYI: There are 2 versions of the film- one where actors tell the story in English and the other in Bosnian/Serbian.  I saw the English version.)  The time is the recent past; the setting is the Bosnian War.  Here is some info from Wikipedia:

The war came about as a result of the breakup of Yugoslavia.  Following the Slovenian and Croatian secessions from the Socialist Federal Republic of Yugoslavia in 1991, the multi-ethnic Socialist Republic of Bosnia and Herzegovina, which was inhabited by Muslim Bosniaks (44 percent), Orthodox Serbs (31 percent) and Catholic Croats (17 percent), passed a referendum for independence on 29 February 1992.  This was rejected by the political representatives of the Bosnian Serbs, who had boycotted the referendum and established their own republic. Following the declaration of independence, the Bosnian Serbs, supported by the Serbian government of Slobodan Milošević and the Yugoslav People’s Army (JNA), mobilized their forces inside the Republic of Bosnia and Herzegovina in order to secure Serbian territory, then war soon broke out across the country, accompanied by the ethnic cleansing of the Bosniak population, especially in Eastern Bosnia.

Love in a time of conflict is not uncommon in film, but this is a compelling depiction.  This film focuses on a promising romance twisted and killed by war.  A dark-haired woman, who lives with her sister and baby nephew in a humble apartment, goes out to a bar/nightclub and dances with a blonde man; they are obviously very into each other.  There is a live band playing and the mood is joyous.

The encounter each other a time later when the woman, a Muslim painter named Ajla (Zana Marjanovic) is a prisoner in the camp run by the Serbian man, a soldier named Danijel (Goran Kostic).  Danijel meets with Ajla in private, just to talk at first, because there is no one else to relate to in the prison.  He needs to let off steam, and show her that he’s not a monster.  Danijel also softens the blow for her, while the other women are treated horribly (beaten, raped, and worked like dogs cooking and cleaning).  Is she in love with Danijel or merely protecting herself?  (It’s up to the viewer to decide.)  They think of a plan that will enable Ajla to escape the prison. 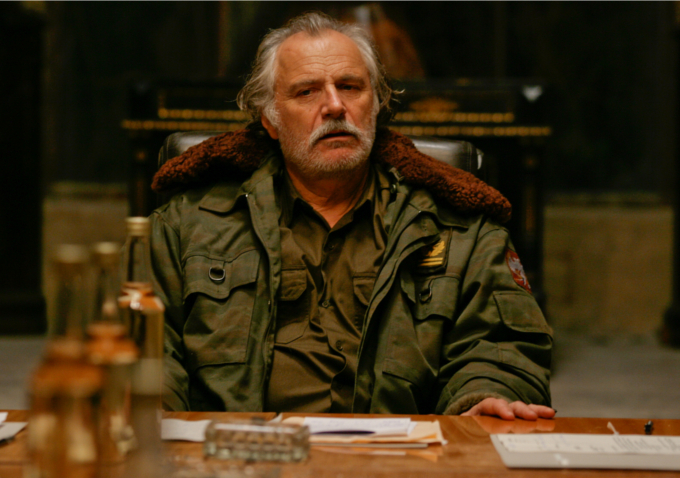 Ajla is unable to escape; she sees brutality all around her, and somehow stays sane.  Meanwhile, her sister suffers a terrible loss and joins a group of rebels.  Danijel is not the typical grunt soldier, he’s the son of a particularly successful/brutal general, Nebojsa (Rade Serbedzija).  His father is grooming him for leadership.  The stress of war gets to the younger man, and he turns on the woman closest to him.  He keeps her hidden away for quite a whille, but Ajla is not safe- not even from Danijel!

I wished there was more information in this film about the politics of this war.  The secondary characters needed more development.  This film come off as limited at times, but the lead actors work very well together.  They have great chemistry with each other, and connect deeply with their characters.  (Nobody is a well-known face here, aside from Serbedzija.)  Ajla is dignified and strong even in the toughest situations.  Danijel slowly transforms from a rather sympathetic antagonist into a fallen, broken man.