The untold want, by life and land ne’er granted,

Now, Voyager, sail thou forth, to seek and find.

-From the poem The Untold Want by Walt Whitman

This box office smash (the BIGGEST of Bette Davis’ career) is loved by MANY, maligned by a few (including film critic Pauline Kael, who referred to it as “schlock”).  The premise is nothing new- an ugly duckling (w/ extra pounds, thick eyebrows, dowdy clothes, and VERY low self-esteem) turning into a beautiful (and more importantly, confident) swan.

The heroine- neurotic Charlotte Vale (Davis)- is helped by her sister-in-law Lisa, a pioneering psychotherapist named Dr. Jaquith (Claude Rains), and eventually- a friend who becomes more- Jerry Durrance (Paul Henreid). The villain in this film is Charlotte’s mother, Mrs. Vale (Gladys Cooper), a widow of considerable wealth in Boston.  She is a domineering woman, displeased by everyone, though her harshest criticism is for her youngest child- Charlotte.

If the psychological elements, glamorous clothes, or music don’t draw you in- there is also a BIG love story element.  But learning to love (and accept) oneself is a key theme in this tale.  As Charlotte tells the depressed preteen Tina: “You can have a kind of beauty… one that comes from within, because you are kind to people.” 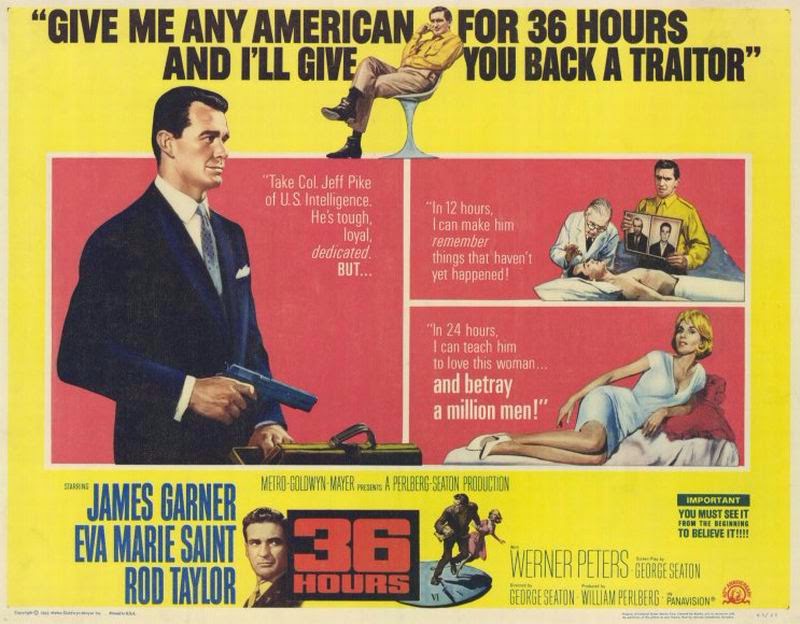 In this psychological war-drama an Army Major is captured by the Germans during World War II. They attempt to brainwash him into believing the war is over and that he is safe in an Allied hospital, so that he will divulge Allied invasion plans.  -IMDB summary

Naturally charming, funny, handsome, and real-life hero (2 Purple Hearts in the Korean War)- James Garner is the protagonist of this WWII spy film. It was written/directed by George Seaton; the original story (Beware of the Dog) comes from Roald Dahl. Some of you know Garner as Mel Gibson’s cranky sparring partner (Maverick); others saw him regularly on TV (The Rockford Files).  But perhaps his MOST famous role was as the elderly Noah, the devoted husband in The Notebook.

This MUST-SEE film was shot in 1962 and released in 1964, BUT in black and white (which adds to its world-building). Garner is joined by two strong actors- Rod Taylor as Dr. Gerber (a jaded psychiatrist) and Eva Marie Saint as Anna (a steely nurse/concentration camp survivor).

Are you really an army sergeant?  -Jeff asks, incredulously

Regular army – no.  I am too old, too fat! Home guard.  We are patrolling the border so then the young, strong, and handsome men can go to Russia and freeze to death. Wonderful system, huh?  -Ernst replies w/ a big laugh

There are Germans in this tale that are NOT all bad, such as portly/jovial/cunning soldier, Ernst (John Banner), who provides terrific comedic moments in the last act of this otherwise serious film.

I highly recommend this film (so am not going to give away TOO much)!  If you liked The Manchurian Candidate, then this is up your alley.

Take us the foxes, the little foxes, that spoil the vines: for our vines have tender grapes. -Chapter 2, Verse 15, Song of Solomon, King James Bible

This film’s screenplay was adapted from Lillian Hellman’s stage play by herself. A few others, including Dorothy Parker, worked on it also.  The film was helmed by William Wyler- a director that needs NO introduction.

In turn of the 20th century, small town Southern aristocrat, Regina Hubbard Giddons (Bette Davis- NEVER one to shy away from unsympathetic roles), wants more freedom (travel to Chicago) and access to money (her older brothers inherited ALL their businessman father’s money).  Regina’s brothers (bachelor Ben and abusive husband Oscar) are ALMOST as ruthless as her!  Oscar’s wife, Birdie, comes from a former wealthy planter family, but she is disrespected by almost everyone (aside from her black servants and niece).

You can flout society’s rule and be Regina, or you can ‘toe the line’ and be Birdie, who is blissfully ignorant of the political meaning of anything happening around her. She requires the charity of men to even survive.  -IMDB commentator

Regina also wants her sweet/clueless teen daughter, Alexandra (Teresa Wright), to meet more eligible men in high social circles.  However, the girl already has a steady presence in her life- David, the local newspaperman.  (This character was created for the movie to provide a caring ally for Alexandra.)  Oscar’s son,  Leo (Dan Duryea), has had his eyes on his cousin for a LONG time.

You can’t make a picture without a villain . . . it pays well and you last.  -Dan Duryea, actor

One day, Regina decides that her daughter is the BEST person to go and fetch her father, Horace (Herbert Marshall) from Baltimore where he has been recuperating for SOME time.