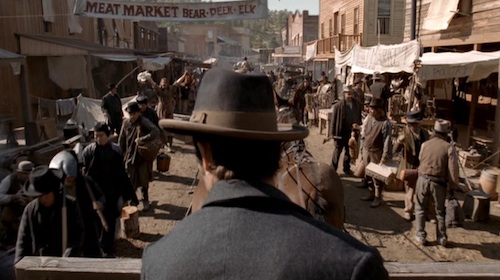 HBO made SO much money off of The Sopranos, the network decided to take a chance on two lavish, intricate other series- Rome (read my review) and Deadwood.  This Western drama series starts off unlike any other (that I’ve seen)- w/ the hanging of a horse thief!  As the show’s creator David Milch explained, an “unhorsed man was akin to a dead man in the Old West.”  Before he can start his new life in Deadwood, South Dakota, Montana marshall Seth Bullock (Timothy Olyphant, who I first discovered and LOVED on Damages) has to administer justice.  There is a large, angry crowd outside his office, men w/ torches ready to storm in and attack the prisoner.  Milch said that Bullock (whose name means “young bull”) “hated the mob,” so he decided to swiftly take things into his own hands.

Bullock (along w/ his pal/business partner, Sol Star) travels on a wagon to Deadwood; the two men plan to set up a hardware store.  Sol (John Hawkes) is Jewish, comes from a business family from Vienna, Austria, though he was raised in Ohio.  This is Hawkes LONG before he made a name for himself on Winter’s Bone (Jennifer Lawrence’s breakout film); he was nominated for an Oscar for his role. 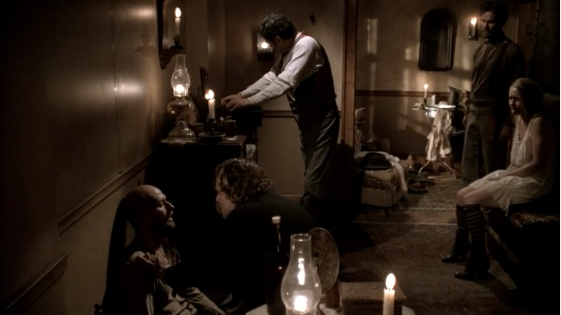 Al Swearengen (Ian McShane), a saloon owner and defacto leader of the camp community of Deadwood, has his own share of troubles to handle after one of his prostitutes, Trixie (Paula Malcomson), kills a regular customer who had the nasty habit of hitting her when drunk.  Doc Cochran (Brad Dourif, who some of you will recognize from the LOTR series) comes to examine the wound- it will be fascinating to study the man’s skull.  I liked Dourif as the villainous Grima Wormtongue, but I quickly grew to LOVE his character on this series! 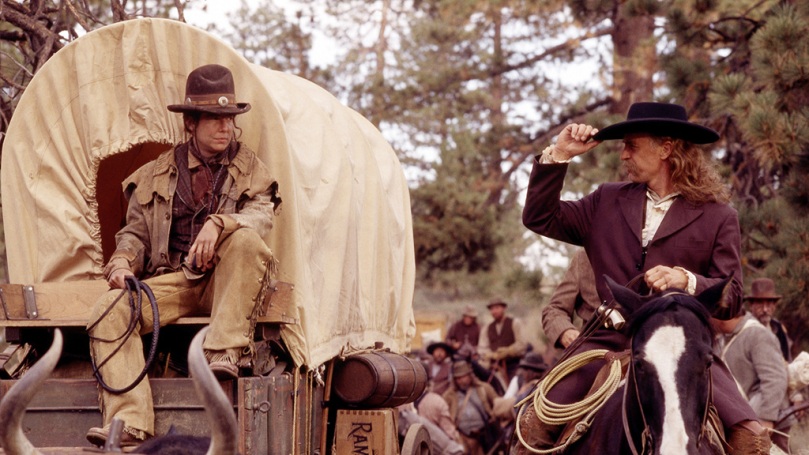 Wild Bill Hickok (Keith Carradine, the biggest name actor in S1) arrives at the camp w/ his loyal companions, Jane (Robin Weigert, most recently seen in Jessica Jones) and Charlie Utter.  It’s obvious that Jane (also a fan fave- including mine, along w/ Doc) is in love w/ Bill, though he has recently married another woman.  As for Charlie, he serves as a friend, counselor, and manager to Wild Bill.  On the road, Wild Bill’s entourage comes across a blonde family (w/ Norwegian accents) who are headed back home to Minnesota; Deadwood we gather was too rough and tumble for them.  We will find out exactly WHY in no time!

Wow, did you see HOW fast Seth got some of the men organized after learning of the murder of the Norwegian family!  He may be a socially awkward man of few words, but he definitely has a STRONG sense of right and wrong.  Wild Bill (another man of action) goes along w/ Seth; he is another fan fave.  (Carradine wore blue contacts, which were quite uncomfortable, for his role as Wild Bill.)

Though an active and talented member of Venetian society who has started to assimilate, he is never fully accepted—and it makes him all the more susceptible to the machinations of Iago, the one person he feels that he can trust.

…Iago’s hatred of Othello stems from his own jealousy.  He resents the fact that Othello promoted Cassio over him, believes that Othello slept with his wife and cringes at the idea that a foreigner—whom he considers inferior—has the success and recognition that he has been denied.  It is a personal vendetta, and he makes the audience complicit.

As my regular readers know, Othello is my favorite Shakespeare play.  The themes of this play are relevant today (as we heard in the video above).  I saw it back in 2011 at the Folger; you can read that review here.  I went to see this new adaptation, starring Pakistani-American actor Faran Tahir, at STC on SUN, FEB 28 (7:30PM); it was just 5 days after the play opened.  I had a seat in the 3rd row (rare for me); three 20s gals sitting behind me had free tickets (how lucky)!  Sitting beside me were a middle-aged couple who also enjoyed the show a lot; the husband made some comments that proved that his wife was the Shakespeare expert, but he enjoyed it, too.  As for the desis (South Asians) in the audience, I didn’t see more than a handful (including myself).

Some of you may be thinking: Isn’t Othello supposed to be black (as in African-American)?  But remember that in The Bard’s time, “black” may have had a different meaning.  “Renaissance representations of the Moor were vague, varied, inconsistent, and contradictory,” as E. A. J. Honigmann, editor of The Arden Shakespeare, noted.  “The term Moor referred to darker-skinned people in general, used interchangeably with similarly ambiguous terms such as African, Somali, Ethiopian, Negro, Arab, Berber, and even Indian to designate a figure from Africa (or beyond). Various uses of the word black are insufficient evidence for any accurate racial classification; that could simply mean swarthy,” Honigmann concluded. 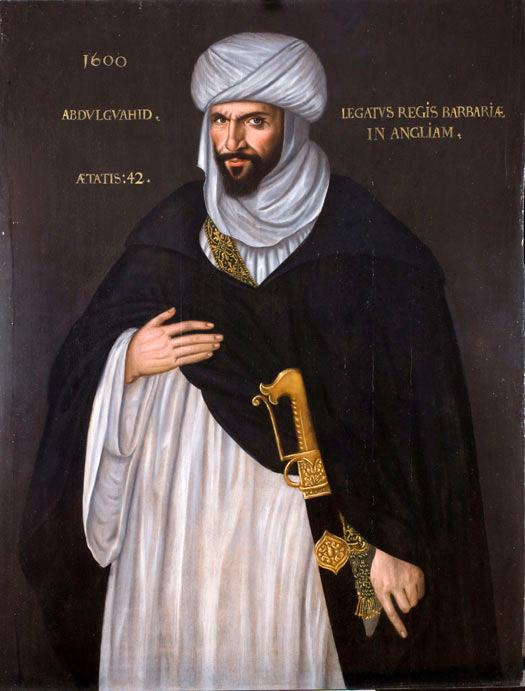 Abd el-Ouahed ben Messaoud ben Mohammed Anoun, Moroccan ambassador to the court of Elizabeth I (some consider him as the model for Othello)

Original Line:  She gave me for my pains a world of… sighs.

Changed Line: She gave me for my pains a world of… kisses.

Above is one of the lines that was changed from the original (I noticed it right away); it’s more suited to the WWI setting of this play.  This is the kind of adaptation that grows on you, though I quickly noticed that the lighting was very well-done (from the 1st scene).  Iago (played by Jonno Roberts, a New Zealand native) is a very strong villain; he’s matter-of-fact, yet funny.  One of his tactics is to tightly embrace several of the individuals (Rodrigo, Othello, and Cassio) who he has ensnared in his web.  Since Roberts is tall, broad, and muscular (like a modern-day military man), this comes off as potentially scary.  I especially liked Iago and Othello’s scenes; the actors obviously have good chemistry and a great command of the text.  All the supporting actors did well, especially the two who played Desdemona and Emilia.

There were two moments in this play that I thought were particularly good.  One was Othello grabbing Iago, pulling him down, and choking him (when the villain first accused Desdemona of unfaithfulness).  The other scene was when Othello went into a fit of epilepsy, falling to the floor, and shaking for several seconds (everyone leaned forward in their seats).  I was sure that this play would get better w/ time; it has been extended through April 2.  Go check it out if you have a chance!

AFI Silver Theatre and Cultural Center  (8633 Colesville Road, Silver Spring, MD 20910) will be hosting the 12th annual New African Film Festival, showcasing African films from ALL corners of the continent. Below is info re: the 2 films that I’m MOST interested in seeing.  (FYI: Opening Night films usually sell out quickly, so try to get tickets early!)  I may have to go see it SUN.

You can read my review of one of the films from last year’s festival here: https://knightleyemma.com/2015/03/22/2015-new-african-film-fest-triangle/

Yared Zeleke’s remarkable feature debut tells the story of young Ephraim, a half-Jewish Ethiopian boy who is sent by his father to live among distant relatives after his mother’s death. Ephraim uses his cooking skills to carve out a place among his cousins, but when his uncle decides that his beloved sheep must be sacrificed for the next religious feast, he will do anything to save the animal and return home.
http://silver.afi.com/Browsing/Movies/Details/m-0100000543

The Price of Love

A recovering addict, Teddy drives his cab across the sprawling Addis Ababa, in the hopes of making an honest living. But when Teddy picks up the beautiful prostitute Fere, just as she’s escaping an abusive john, he’s thrust back into the world of trouble he tried to escape. After an act of retribution, which leaves Teddy’s cab stolen, he joins forces with Fere in the hopes of saving both their lives. As romance blossoms between the two outsiders, they learn the hard way that love comes with a price.

The star of ABC’s hit Scandal was one of the FEW high profile black actresses who didn’t boycott the Oscars this year (#OscarsSoWhite); however, at least one fashion critic said that this gown may actually be a sort of protest (noting that the leather top reminds the viewer of Beyonce’s Formation performance at the recent Super Bowl).  We know that a woman w/ Kerry’s figure and confidence can wear almost anything and pull it off, BUT this dress is NOT quite worthy of the red carpet. 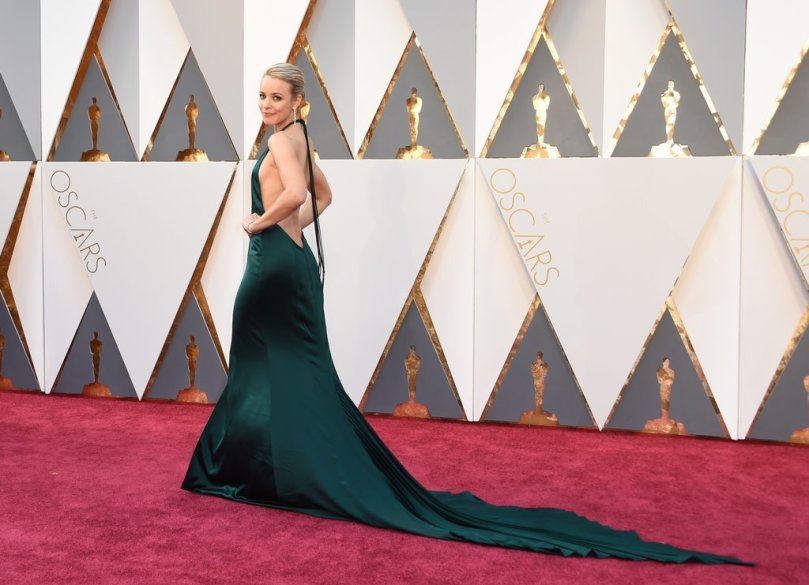 Hmmm… I LOVE this color, but the Spotlight actress’ gown comes off as too skimpy (on the sides) and simple for the Oscars.  And that train could’ve been hazardous! 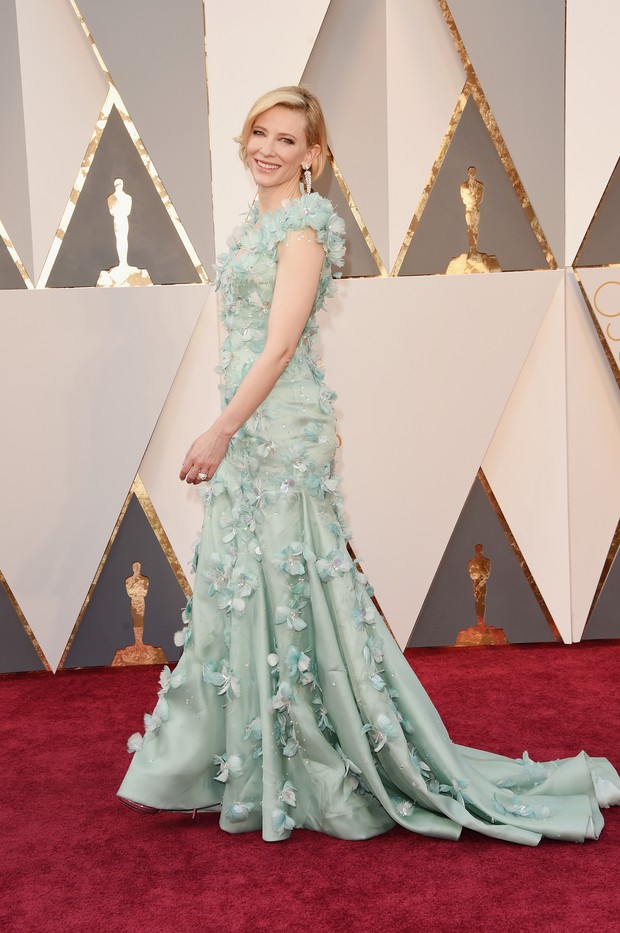 We know that the star of Carol ALWAYS has interesting gowns (made by Armani), BUT the color is too light (for her complexion).  A few style experts commented that there is a BIT too much going on- feathers made into flowers AND the sparkly beading.  I thought it looked good from afar. 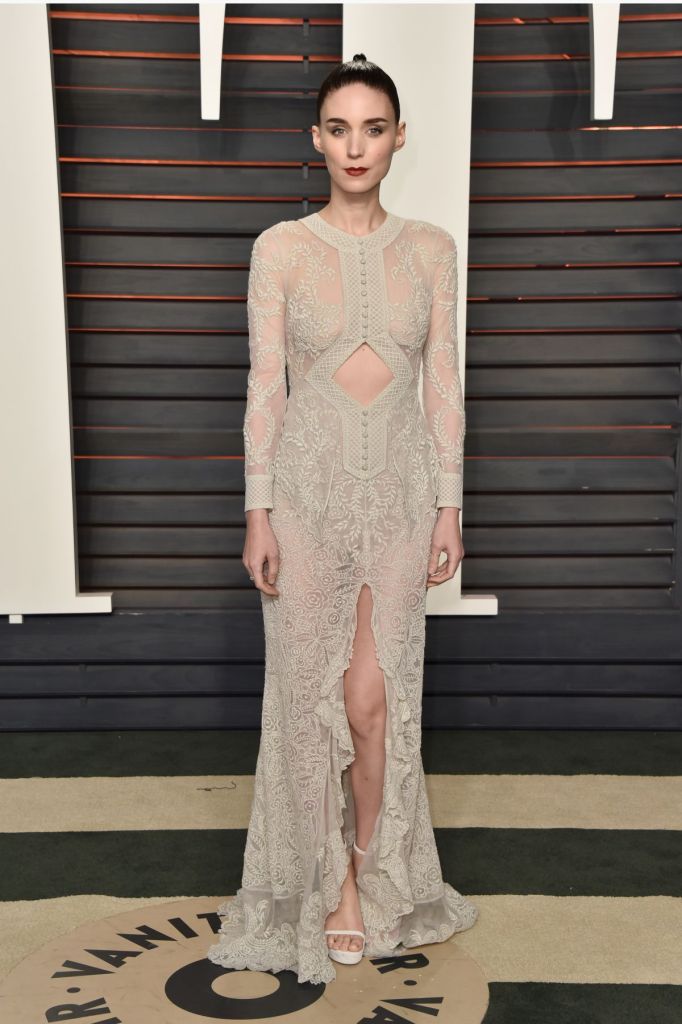 I liked the intricate leaf detail on this gown, BUT that’s about it.  The exposed stomach and the lower half of the dress are NOT working for her; but, the Carol actress is still young. 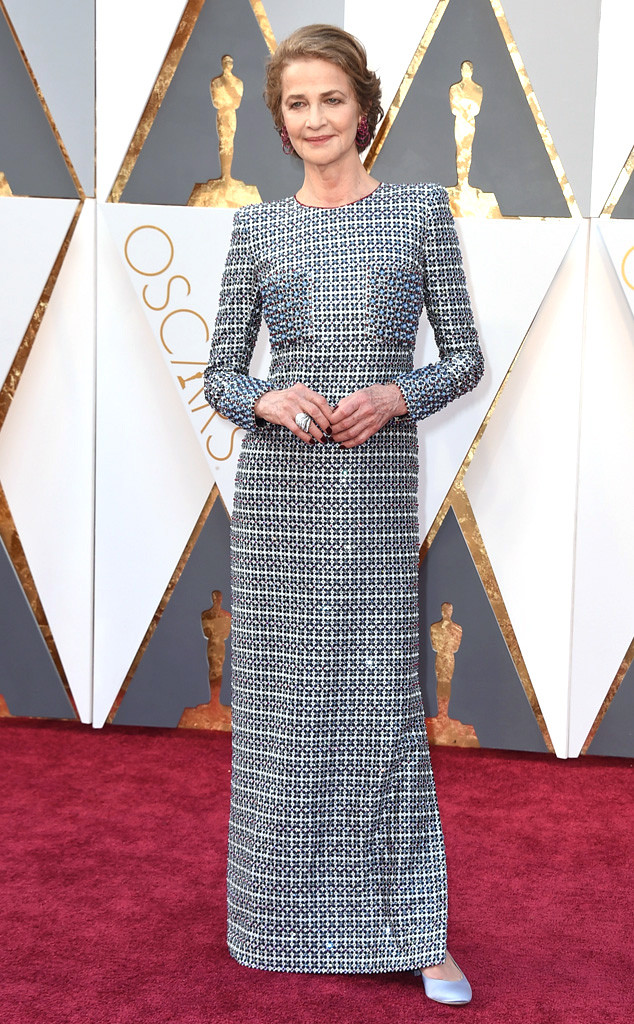 The 45 Years actress (who hails from England) was recently in the press for her controversial comments re: the lack of diversity at the Academy Awards.  However, you can’t deny her talent and beauty (though NOT conventional for Hollywood standards).  Rampling is tall, wiry, and has the type of face that commands attention (often rivaling her male co-stars).  You can see her in the 2nd season of UK series Broadchurch (now available on Netflix).  She recently turned 70, and this simple/conservative gown suited her well (esp. in close-up). 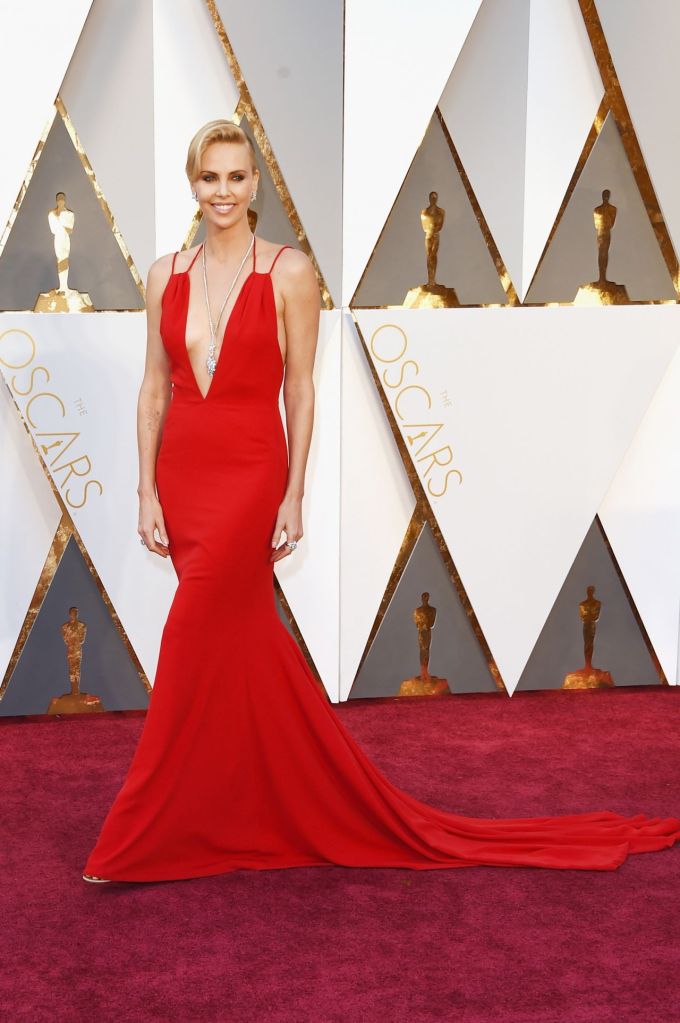 I LOVED what one fashion expert said of this simple gown: “This is a case where fitness trumps fashion.”  It seems TOO simple for the Oscars, but the now 40 y.o. statuesque actress can wear anything and look fierce (as we saw in Mad Max: Fury Road). 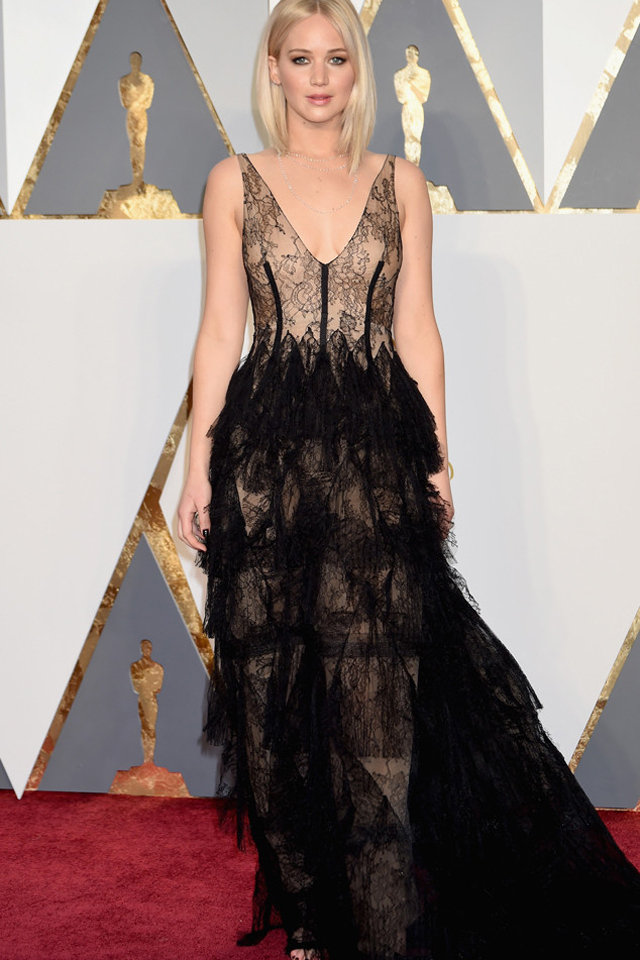 This is a GREAT dress- I esp. love the top!  Jennifer’s film Joy may NOT have been seen by a very wide audience, BUT this dress is spot on for the Oscars. 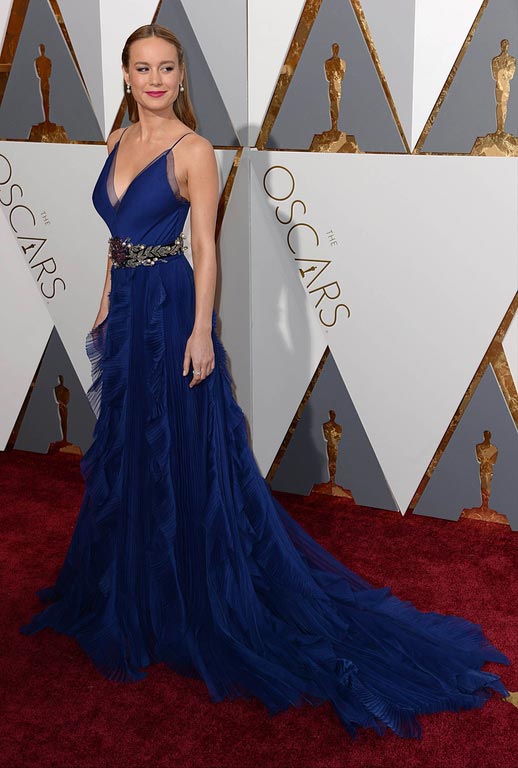 Everything about this gown is PERFECT- the cut, color, and embellishments!  Plus, she won Best Actress- the best accessory! 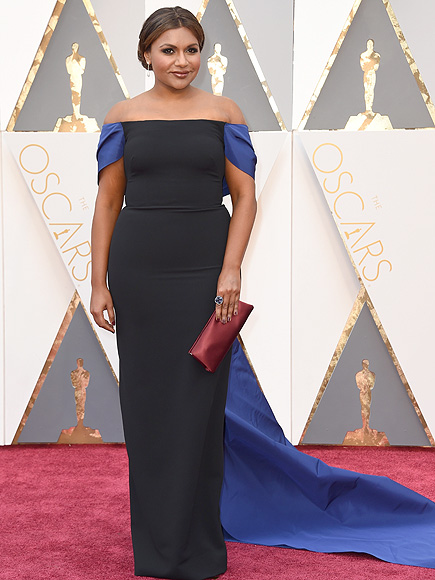 I saw this dress on Mindy’s Instagram, and it looked elegant.  One the red carpet, it comes off as too plain.  I like her simple hairdo and the makeup is great (as usual).  I LOVE how Mindy has created opportunities for herself in Hollywood- she’s obviously a hard worker and funny lady, BUT this is TOO serious of a gown. 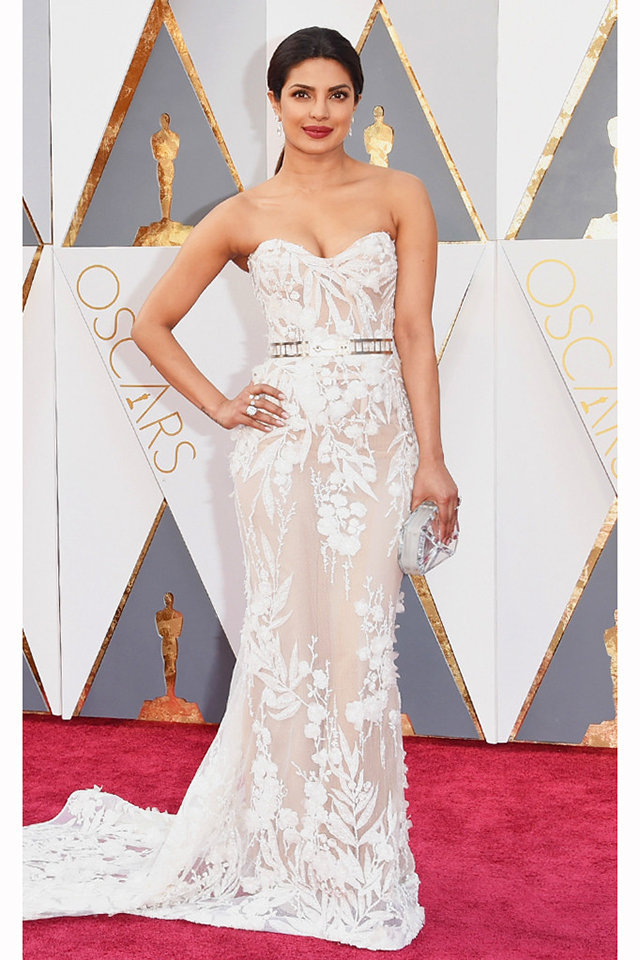 The star of ABC’s Quantico was the MOST Googled celeb of the night- WOW!  This dress looks FAB on the Indian actress; it reminded me of Halle Berry (back when she was a red carpet darling).  Recently, I reviewed Priyanka’s latest Bollywood film, Bajirao Mastani. 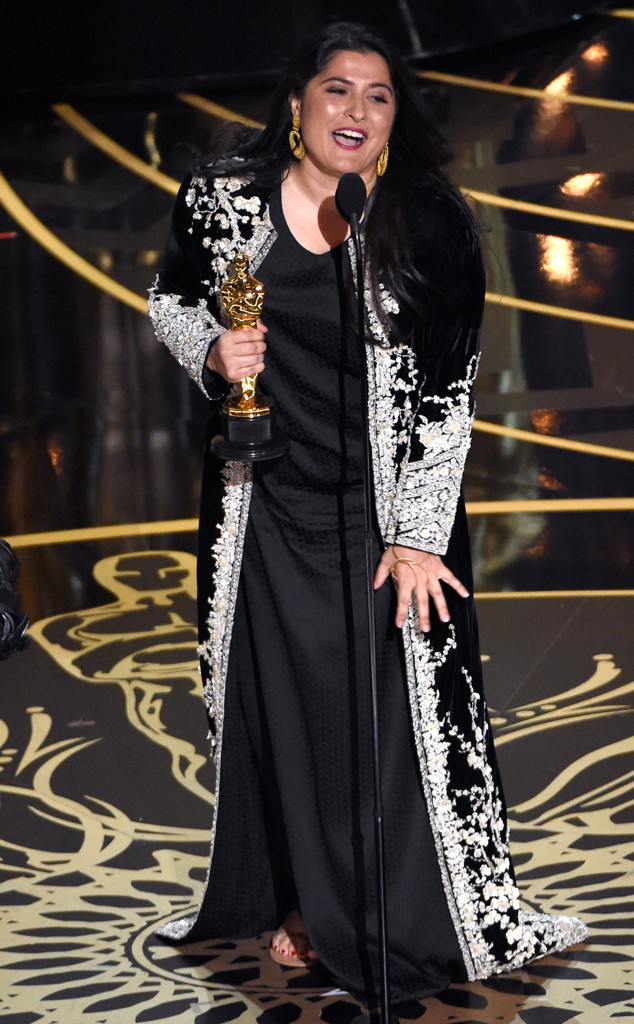 Did you know this director now has 2 Oscars (for A Girl in the River: The Price of Forgiveness (2015) and Saving Face (2012)!?  I need to see these docs still.  Sharmeen is wearing a simple dress w/ a long, intricate jacket over it (she is Pakistani); at formal desi events all over the world, you will find styles similar to this one.  Her Oscar is the perfect accessory!