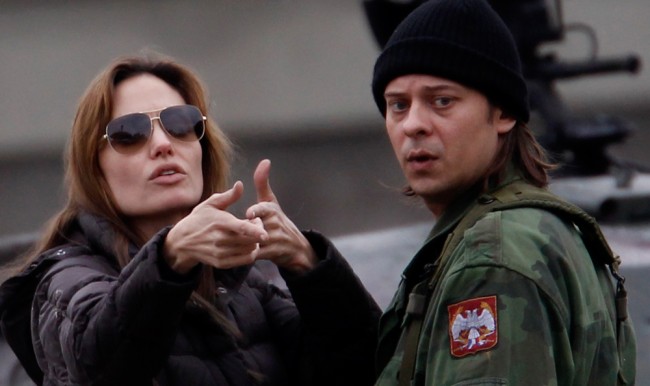 Yes, this is Angelina Jolie’s movie (her directorial debut), but don’t let that put you off- it’s quite a tale!  There are no flashy directorial moves, and the pace can seem slow, but I feel the subject matter is worth a look.  However, if you are a sensitive person, this is not the film for you!  (FYI: There are 2 versions of the film- one where actors tell the story in English and the other in Bosnian/Serbian.  I saw the English version.)  The time is the recent past; the setting is the Bosnian War.  Here is some info from Wikipedia:

The war came about as a result of the breakup of Yugoslavia.  Following the Slovenian and Croatian secessions from the Socialist Federal Republic of Yugoslavia in 1991, the multi-ethnic Socialist Republic of Bosnia and Herzegovina, which was inhabited by Muslim Bosniaks (44 percent), Orthodox Serbs (31 percent) and Catholic Croats (17 percent), passed a referendum for independence on 29 February 1992.  This was rejected by the political representatives of the Bosnian Serbs, who had boycotted the referendum and established their own republic. Following the declaration of independence, the Bosnian Serbs, supported by the Serbian government of Slobodan Milošević and the Yugoslav People’s Army (JNA), mobilized their forces inside the Republic of Bosnia and Herzegovina in order to secure Serbian territory, then war soon broke out across the country, accompanied by the ethnic cleansing of the Bosniak population, especially in Eastern Bosnia.

Love in a time of conflict is not uncommon in film, but this is a compelling depiction.  This film focuses on a promising romance twisted and killed by war.  A dark-haired woman, who lives with her sister and baby nephew in a humble apartment, goes out to a bar/nightclub and dances with a blonde man; they are obviously very into each other.  There is a live band playing and the mood is joyous.

The encounter each other a time later when the woman, a Muslim painter named Ajla (Zana Marjanovic) is a prisoner in the camp run by the Serbian man, a soldier named Danijel (Goran Kostic).  Danijel meets with Ajla in private, just to talk at first, because there is no one else to relate to in the prison.  He needs to let off steam, and show her that he’s not a monster.  Danijel also softens the blow for her, while the other women are treated horribly (beaten, raped, and worked like dogs cooking and cleaning).  Is she in love with Danijel or merely protecting herself?  (It’s up to the viewer to decide.)  They think of a plan that will enable Ajla to escape the prison.

Ajla is unable to escape; she sees brutality all around her, and somehow stays sane.  Meanwhile, her sister suffers a terrible loss and joins a group of rebels.  Danijel is not the typical grunt soldier, he’s the son of a particularly successful/brutal general, Nebojsa (Rade Serbedzija).  His father is grooming him for leadership.  The stress of war gets to the younger man, and he turns on the woman closest to him.  He keeps her hidden away for quite a whille, but Ajla is not safe- not even from Danijel!

I wished there was more information in this film about the politics of this war.  The secondary characters needed more development.  This film come off as limited at times, but the lead actors work very well together.  They have great chemistry with each other, and connect deeply with their characters.  (Nobody is a well-known face here, aside from Serbedzija.)  Ajla is dignified and strong even in the toughest situations.  Danijel slowly transforms from a rather sympathetic antagonist into a fallen, broken man.