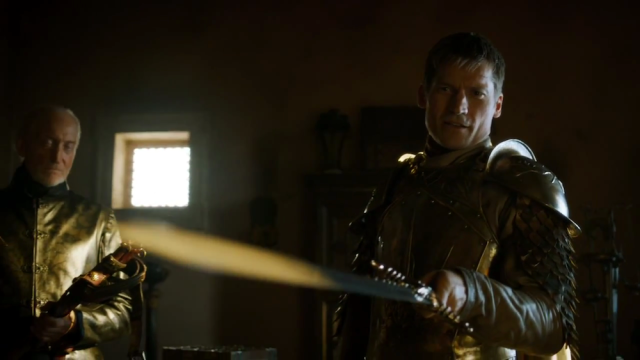 SPOILERS: Don’t read this review if you have not yet seen or don’t want to know details from the season premiere of Game of Thrones.
Where did you get this much Valyrian steel?  -Jaime

From someone who no longer had need of it.  -Tywin

In the opening (wordless), the Hand of the King, Lord Tywin Lannister (Charles Dance), is having Ned Stark’s sword (heavy/long) melted down into 2 separate ones.  It’s an unexpected sequence for a season opener.  Tywin presents one sword to his first-born son, Ser Jamie (Nicolaj Coster-Waldau), who now has to wield it w/ his good (left) hand.  However, Jamie disobeys Tywin’s order of leaving the Kingsguard and settling down at Casterly Rock, the Lannisters’ ancestral home.  (What do you think of  Jaime’s new hairdo?)

Keep it, a one handed man with no family needs all the help he can get.  -Tywin to Jamie

Tywin is disappointed by Jaime’s decision (basically disowns him), but lets him keep the sword.

Viewer Comment: “Two Swords” can be applied in many ways. the greatest symbols of House Stark are destroyed (Grey Wind’s pelt) or recast in someone else’s image (the great sword, Ice).  As Ned’s sword is destroyed, Arya – who has been reforged by her adventures – reclaims one of the clearest connections to her past, her own sword, Needle. It’s also interesting to see that as great as the Lannister’s are, they lacked an heirloom Valyrian sword (like other great houses), and no amount of gold could buy one.

You took too long.  -Cersei to Jaime, rejecting his advances

Jaime (fitted by Qyburn w/ an ornate/golden hand) is very hurt/shocked to be rejected by his twin/only love Cersei (Lena Headey), who we know had been messing around with cousin Lancel.  Some viewers wondered what were “those symptoms” that (ex-maester) Qyburn mentioned?  The twins’ break-up scene is interrupted by one of Cersei’s spies, who heard Shae yelling inside Tyrion’s chamber.  Uh oh!

Tell your father I’m here, and tell him the Lannisters aren’t the only ones who pay their debts.  -Oberyn warns Tyrion

There’s a new kid in town, but he’s not like any other knight we’ve met so far!  Prince Oberyn Martell (Chilean actor Pedro Pascal), nicknamed the Red Viper, travels to Kings Landing from Dorne, a desert land w/ customs very different from the capital.  His “paramour” Elaria Sand (Indira Varma) is by his side; she played a supporting role in HBO’s Rome.  When Olyver (now promoted to “procurer” in Littlefinger’s brothel) calls her “my lady,” she quickly corrects him.  “I’m a bastard.”  As Weiss and Benioff explained (extra segment), Dornish society doesn’t make outcasts of illegitimate children.

We also quickly learn that Oberyn, who is charismatic, dangerous, and vengeful, likes things his way!  He tells Tyrion what’s up- he’s looking for revenge for what happened to his older sister, Elia, at the hands of The Mountain (following Tywin’s orders).   I think the casting folks made the right decision to have a newcomer in this role.

We see more of Tyrion (Peter Dinklage) and Sansa’s (Sophie Turner) marriage.  She’s deeply depressed, won’t eat (not even her fave lemon cakes), and seeks the godswood (trees representing the old gods).  Poor Sansa!  Later on, in the garden, Ser Dontos (the drunken/disgraced knight who’s life she had Joffrey spare), gives her his mother’s necklace (the only thing he has of any value).  This is an unexpected and sweet scene.  Turner’s really grown as an actress over the seasons!

Someone forgot to write down all your great deeds.  -Joffrey says, flipping through The Book of Brothers

Is there?  For a 40-year-old knight with one hand?  How can you protect me with that?  -Joffrey retorts

Later on, in a scene w/ Ser Meryn (Ian Beattie) and King Joffrey Baratheon (Jack Gleeson), Jaime is once again cut down.  Ser Meryn resents the fact that Jaime will be the one guarding Joffrey at his upcoming wedding.  And Joffrey continues to be a little jerk- no shock there! 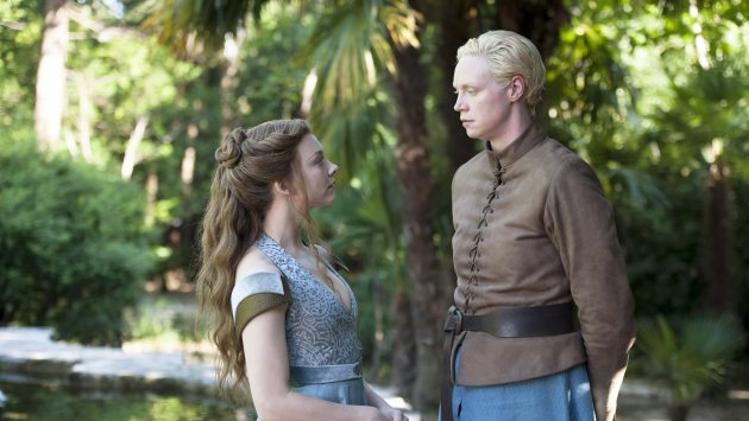 Lady Olenna Tyrell (Dame Diana Rigg) is not happy w/ the jewels in King’s Landing.  She even tosses one into the garden- LOL!  (My first thought: That could be a desi situation!  No offense to any easygoing desi matriarchs out there.)

Brienne (Gwendolyn Christie) comes to speak w/ Lady Margaery (Natalie Dormer).  On their garden walk, Brienne explains to the future queen that Renly (a man they both cared for) was killed by a shadow creature bearing the face of his older brother, Stannis.  Oooh, I really want these ladies to be gal pals! 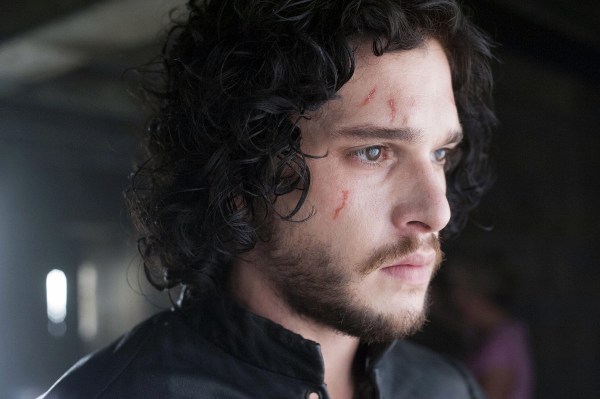 I can tell you it’s a very interesting season for Jon because he doesn’t have a paternal or commander looking out for him anymore.  In the previous three seasons he’s gone through about six different patriarchal figures and I think now he’s, where he was being groomed, I think now he’s a leader and that’s what this whole season is about for him.  -Kit Harington

If we beheaded every ranger who lay with a girl, the wall would be manned by headless men.  -Maester Aemon

We learn, from Tormund, that Ygritte missed killing Jon (Jon Harington) on purpose.  I liked the small scene between Jon and Sam, where Jon reminisces about his half-brother Robb.  He’s coming into his own, gets a great scene in front of he Night’s Watch council.

Dragons, Khaleesi, they can never be tamed not even by their mother.  -Jorah warns Daenerys

Whoa, those 3 dragons have grown!  Ser Jorah Mormont (Iain Glen) points out that they can’t be controlled now.  Another change: Daario is now played by Michael Huisman (who I’ve seen in HBO’s Treme).  Hmmm… we’ll see how it plays out.  I hope there are sparks between him and Dany (Emilia Clarke).  “It looks like the cast the actor, not the look, which is a good thing,” said Joanna Robinson (co-host of A Cast of Kings podcast).

Little lady wants to get away from your stench.  -Arya retorts

Arya Stark (Maisie Williams), looking pretty grown, and The Hound (Rory Cochrane) happen upon an inn where she spies the man who killed her friend, the butcher’s boy (back in Season 1).  He still has Needle (her sword).

You lived for the king, you’re going to die for some chickens?  -Polliver (now a Lannister man) asks

Someone is.   -The Hound replies matter-of-factly

Inside the inn, they are approached by that repugnant man (now part of the Lannister army; his band of misfits is under The Mountain’s command).  The Hound takes his attitude for a bit, then attacks.  Arya exacts her revenge, using Needle (a gift from Jon).  This scene is sending a mixed message- a young girl killing and enjoying it (note the little smile).

Viewer Comment: Tywin is thinking that he’s pretty much wrapped up the rebellion, but Oberyn, the Tyrells, Dany, and ultimately Arya are all indicating in their own ways that the Lannisters still have a lot more battles to fight.