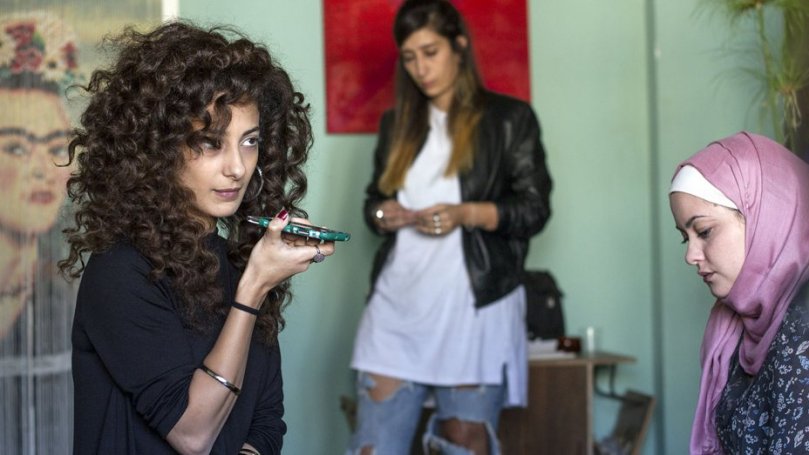 It is the time now for women to come and speak up. Until now, we were listening to men, and they were the ones to run everything. -Maysaloun Hamoud (writer/director)

Arab-Israelis make up about 20 percent of Israel’s citizenry. They share the same ethnicity, language, and culture of Palestinians in the West Bank and Gaza Strip; many identify as Palestinians rather than Israeli. This film (written and directed by 35 y.o. Maysaloun Hamoud- pictured below) tells the story of three 20-ish Arab women (two Muslim and one Christian) who have left their hometowns to work/study in Tel Aviv. They find themselves stuck between traditional Arab society (which values modesty, virginity, arranged marriage) and a more open/Westernized Israeli society (w/ dating, alcohol, drugs). 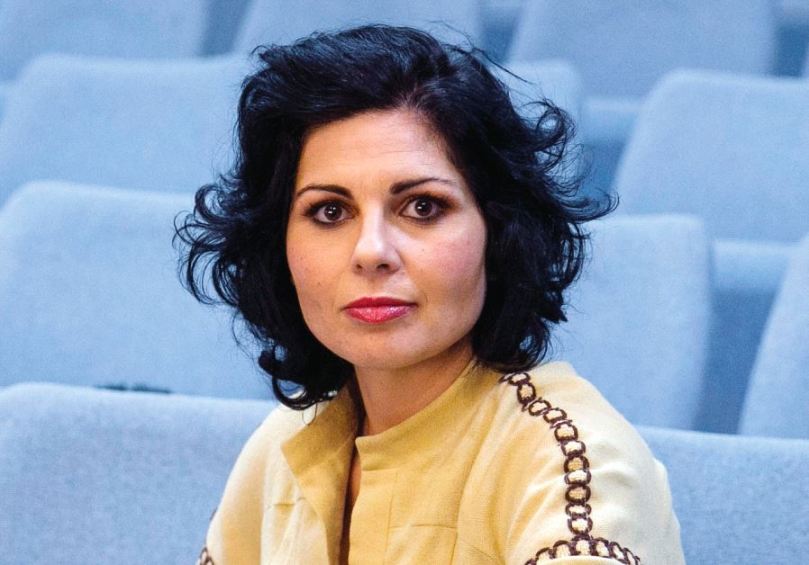 Laila (Mouna Hawa) is an attorney sharing an apt. w/ close friend, Salma (Sana Jammeieh). Into their world enters Noor (Shaden Kanboura), a hijabi Computer Science major who is prepping for finals. We can see that the pals are dismayed to be stuck w/ this new roomie. Though Noor is religious, she is NOT judgmental re: Laila and Salma’s smoking, drinking, and parties w/ a diverse group of friends. She focuses on studying and keeping in touch with her fiance, Wissam. She cooks for him when he comes over to her new place. Wissam keeps pressuring her to move up the date of their wedding. He does NOT approve of her new building or roomies (who slowly become her friends).

Laila (who loves to flirt) starts seriously dating a man, Ziad, who had his eye on her from a wedding they both attended. Ziad is VERY attracted to Laila, particularly b/c she is an uninhibited/beautiful/strong woman. Salma quits her restaurant job, after she and a fellow Palestinian coworker are yelled at by their (Israeli) boss for joking around (in Arabic) in the kitchen. She also has to deal w/ dinners set-up by her wealthy parents to introduce her to single men.

[1] …the movie is also very much about sisters doing it for themselves. There’s an automatic solidarity whereby women– at least young women of similar ages– are all automatically soulmates; and men, it almost goes without saying, are swine. Despite those stereotypes, the movie holds interest by virtue of believable acting and believable situations.

[2] The three women characters were believable, warm, expressing solidarity to each other despite their very different personalities and lifestyles. The theme of personal conflicts between tradition and modernity is not new. What makes this film different is that the issues are very real and current and those outside the tradition don’t see it.

AFI Silver Theatre and Cultural Center  (8633 Colesville Road, Silver Spring, MD 20910) will be hosting the 12th annual New African Film Festival, showcasing African films from ALL corners of the continent. Below is info re: the 2 films that I’m MOST interested in seeing.  (FYI: Opening Night films usually sell out quickly, so try to get tickets early!)  I may have to go see it SUN.

You can read my review of one of the films from last year’s festival here: https://knightleyemma.com/2015/03/22/2015-new-african-film-fest-triangle/

Yared Zeleke’s remarkable feature debut tells the story of young Ephraim, a half-Jewish Ethiopian boy who is sent by his father to live among distant relatives after his mother’s death. Ephraim uses his cooking skills to carve out a place among his cousins, but when his uncle decides that his beloved sheep must be sacrificed for the next religious feast, he will do anything to save the animal and return home.
http://silver.afi.com/Browsing/Movies/Details/m-0100000543

The Price of Love

A recovering addict, Teddy drives his cab across the sprawling Addis Ababa, in the hopes of making an honest living. But when Teddy picks up the beautiful prostitute Fere, just as she’s escaping an abusive john, he’s thrust back into the world of trouble he tried to escape. After an act of retribution, which leaves Teddy’s cab stolen, he joins forces with Fere in the hopes of saving both their lives. As romance blossoms between the two outsiders, they learn the hard way that love comes with a price. 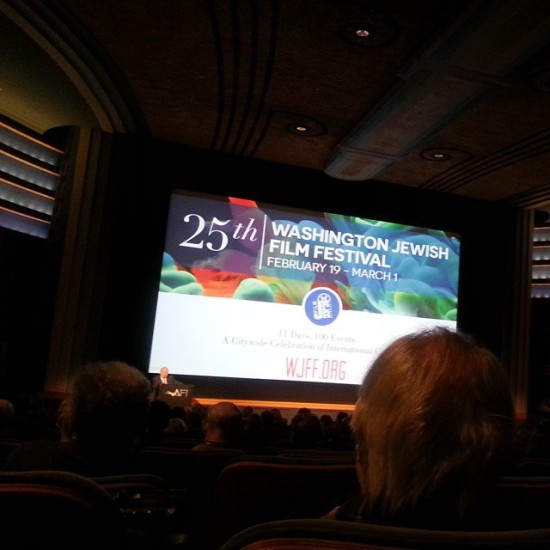 Apples from The Desert

This is a coming-of-age story (one in a shory story collection- Apples from the Desert by Sayvon Leibrecht) about Rachel, a 19 y.o. ultra-Orthodox Jewish girl, who lives in Jerusalem w/ her parents.  Unlike most families in their community, she’s the only child of her parents.  Rachel yearns for a different life than the one of her housewife mother.  Rachel’s unmarried aunt lives down the street, w/ her cat, and seems content to be single/celibate.  We learn from her father that people in the community still whisper about the time Rachel drank bleach (in an attempt to kill herself).

At a community center, Rachel watches young secular men and women doing folk dances.  This is forbidden in her sect, of course.  She eventually gets the courage to joins the class, taking some time off from her job.  A red-headed college boy in this class tells her about his life on a kibbutz, and they develop a friendship.  Her father, worried about Rachel’s changing attitude and future, plans a different future.  Her mother sees that she’s unhappy, but fears losing her only child to the world.

The Dove Flyer (AKA Farewell to Baghdad)

This film (based on the novel by Eli Amir) tells the story of the last years of the Jewish community in Baghdad, Iraq, before their expulsion in 1950 and settlement in Israel. The teen narrator, Kabi, watches as the members of his extended family each develop different dreams/fears: his father wants to emigrate to the promised land, his uncle Hizkel (a Zionist) is suddenly arrested; his Muslim teacher, Salim, believes in the equality of Arabs and Jews; and his other uncle just wants to raise his doves.  World War II draws closer, houses are ceased, Jews are beaten in the streets and hung in public.  Kabi is watchful of Hizkel’s spirited young wife, who turns heads w/ her blonde hair, blue eyes, and revealing dresses.