“The First Dog” moved into the White House today.  Malia and Sasha looked VERY happy (and adorable) to have Bo w/ them- finally!  Like most kids, they’d wanted a puppy for a LONG time.

Below are my FAVE contestants:

Anoop did well today BUT I didn’t like the song he chose.  And his hair is a BIT too short IMHO.  His close college pals were in the audience today.

Did you know that Adam was featured in the Sunday Styles section of the most recent NYT?  The song he chose tonight, Born to be Wild, suited him PERFECTLY.  My dad said, “Oh, he’s already famous.  He doesn’t need to win the competition.”  I liked the dancing and personality, as well as the vocals.  Wow, I wish I could be confidant like Adam!

Lil continues to add class and elegance to this season.  I’m sure she’ll get a record deal even if she DOESN’T win!

I missed Allison’s performance b/c I was microwaving dinner, BUT it seems like she did well.  She’s VERY young to be out in the world and famous, BUT seems like a level-headed girl who could handle such things.

Scott was so polite and sweet on Idol- a good role model for teens and young adults.  He didn’t let his visual limitations limit how hard he worked.  IMHO Scott was great on piano, BUT his vocals need more work.  I think he improved week by week.  When it got down to Anoop and Scott, I knew that Scott would be the one w/ less votes.  (It was about 30,000 less.)

Paula looked QUITE sad when it was time for Scott to go.  His family was on pins and needles until the end of the show, BUT you could see the pride on their faces.  How can anyone NOT cheer for this guy!?  He was poised and mature, unlike MANY past contestants on Idol.  And like him, I have slightly messy/wavy hair and come from AZ (Tucson).  I wish him all the best; Scott showed class in a tough situation!

It was COOL to see Kellie Pickler (from small town North Carolina) looking so cute and confidant on AI last night.  I downloaded her song “Best Days of Your Life” today (along with a few others from AI).  She’s touring w/ Taylor Swift- country’s biggest star right now!

This Travel Channel show can be fun AND informative.  Recently, Tony (a chef for MANY yrs/native NYer) went to a big city near the sea- Jeddah, Saudi Arabia with Dahnya (a woman filmmaker raised in North Dakota and Saudi Arabia).  He’s NOT afriad to try foods that MOST Americans consider “weird,” such as camel.  This lady was young, bubbly, and willing to try WILD foods along w/ Tony.  Saudis are NOT what we imagine them to be, Tony learned.  They can be VERY welcoming to visitors, as hospitality is a HUGE part of the culture.

Series 1 of this Irish drama is being rerun on Maryland Public TV.  I NEVER get tired of this show, especially Seasons 1 & 2!  My mom LOVES it, too.

Little Mosque on the Prairie

This is a comedy show you can watch w/ your family from the Canadian Broadcasting Corporation (CBC).  Season 1 DVD set is available online; Seasons 2 & 3 will be out this September.

I just watched some interviews, clips, and the first ep of Season 3 of this Showtime drama on the Internet Movie Database (IMDB).  The cast is pretty to look at, as well as pretty good actors (Jonathan Rhys Meyers is VERY intense!), BUT the dialogue is not as sophisticated as I expected.  It’s NOT completely historically accurate, either; events occur faster than in real life.  But the show is engaging…

I especially look forward to seeing more of James Frain (who plays the intelligent/scheming Thomas Cromwell).  I like this actor’s ability to fit into many different roles; he also has an interesting face.

Like Loading...
Pics of the day:
I (FINALLY) got rechargeable batterries for my camera!  The regular ones wear out V fast.  So I can take pics more often- YAY!

Thoughts of the day:

American Idol was pretty good today, BUT not everyone did their best!  I was impressed by Adam, Alison, and Anoop the most.  Anoop (who I was worried for) did QUITE well tonight; he was near perfect in my mind!  He has a LOT of soul.  Kris is VERY cute, but he doesn’t leave much of an impression.  I felt a LITTLE bad for Scott b/c he tried to do something different, and it totally backfired.  Lil was good (as usual), BUT too much like Tina Turner; she seems very soulful and mature for her age.  Lil already has the chops to be a good stage presence, as do Matt and Adam.  Matt is a good performer (as I noted before), BUT I don’t think he has as much raw talent as Lil, Alison, etc.  Alison is TRULY gifted; she reminds me of Mariah Carey, Pink, and  Kelly Clarkson.  I liked her outfit tonight, too!  Adam is on top right now b/c he is talented, confidant, AND unique.  (It was COOL when Simon gave him a standing ovation).

Law and Order: Special Victims Unit tonight was all new!  Too bad Olivia wasn’t on; Mariska wasn’t feeling well for a time.  Delroy Lindo (who has crucial roles in Malcolm X and The Cider House Rules) did a TERRIFIC job as the cranky veteran detective who came in to help w/ the case.  You can’t tell when this guy is acting!  (I found out that he’s actually a Jamaican Brit.)  I think they should bring in his character again.  Eliott related to him as a cop and as a father.

I’m REALLY glad that Stephanie March is back, even though she’s still under “Special Guest Star.”  She’s just as pretty and in shape as before; I LOVE her glasses!  I wonder how long Alex will stick around…

BUT the big question- how can this actress be married to (celeb chef) Bobby Flay and stay so Manhattan high society slim!?

The bottom three this week: Matt (hard to believe!), Michael (sorry, but he’s not a strong contender), and Scott (I think he has potential).  Then it went to bottom two: Matt and Michael.   Sorry to Michael fans, BUT he lost out!

Wow, Ruben has lost QUITE a bit of weight!  He also got married- how cool is that!?

Pics of Boston (where Dad went for a conference): 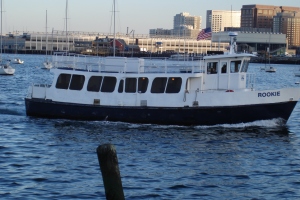 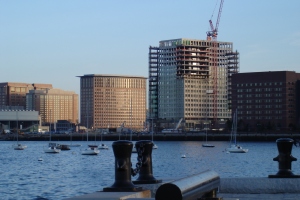 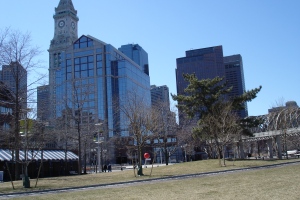 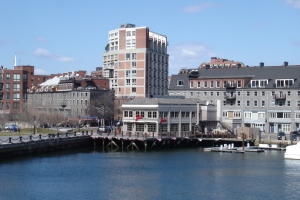 The Jackson Heights Film Festival (in my old ‘hood in Queens) showed Chop Shop last fall.  I wanted to see it, but got the info too late.  This film is about an orphaned Dominican boy who works at an auto repair shop in a rough area (near Shea Stadium).  Ale (as he is known) has never been to school and worries about his 16 y.o. sis.   The sibs’ big dream is to save enough money to buy (and eventually run) a food van.  I wondered who the director was.

I read about director Ramin Bahrani, an Iranian American raised in Winston-Salem, NC,  in last weekend’s New York Times Magazine.  He has already made 3 movies and teaches at Columbia (where he received his BA).  And he’s only 34! 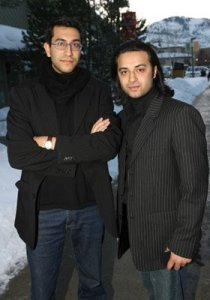 Bahrani’s 1st film, Man Push Cart, is about Ahmad (a young Pakistani immigrant) who runs a coffee cart in NYC.  He is also a dreamer, a lover, a hustler, a pop singer and, not incidentally, a Muslim man making his way through a city still gripped  by post-9/11 anxiety. 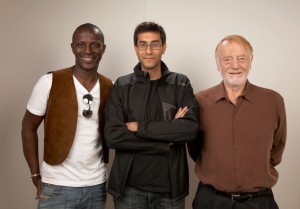 Bahrani’s latest film, Goodbye Solo, is set in his hometown of Winston-Salem.  It will be out tomorrow (March 27).  The protagonist is a young Senegalese family man who drives a taxi.  He becomes friends w/ one of his passengers, an elderly white Southern man who is nearing death.

This is a GREAT classic film based on Dickens’ novel!  The grown-up Pip is played by John Mills (one of the UK’s most respected actors; father of actress Hayley Mills).  Alec Guiness is Pip’s bubbly, helpful roomie Herbert Pocket.  He’s fun to watch!

The young Estella is the (unusually) pretty Jean Simmons; she was later in Spartacus, Guys and Dolls, etc.  And yes, she always had that posh speaking voice!

Some thoughts on American Idol 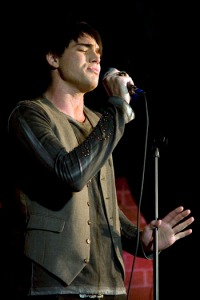 The best performances tonight were (in my order): Adam, Allison, Matt, Danny, and Anoop.  Adam (a stage actor who recently appeared in Wicked) showed that he has range; he looked SO different (but still original).  His song was GREAT!  Matt was very confidant onstage, and his song went smoothly.

Anoop was good (as I expected), BUT could have been better.  Maybe it was song choice?  Maybe he needs to show more confidence or style?  Hmmm…  He looked even better than last wk (my mom said he looks great).

Danny showed that he has personality and energy; his performance was VERY fun!  I felt bad for Lil b/c she didn’t have a great performance.  Allison improved a LOT from last time; she is very natural (like Anoop) tonight.  Very good group of young people w/ humble, nice personalities (I feel).