This 10-part series examines the aftermath of racially charged shootings in a small North Carolina town. It was produced by the successful/critically-acclaimed husband-wife team of Gina Prince-Bythewood (Beyond the Lights, The Secret Life of Bees, Love & Basketball) and Reggie Rock Bythewood (Beyond the Lights, Notorious). Aside from the timely/controversial topic, the supporting cast could be a big draw (incl. Oscar winners Richard Dreyfuss and Helen Hunt, as well as Law and Order‘s Jill Hennessey). The leads are two black actors- film veteran Sanaa Lathan (who plays investigator Ashe Akino) and up-and-comer Stephan James (federal prosecutor Preston Terry). James hails from Canada and notably played the young John Lewis in Selma.

Actors Sanaa Lathan and Mack Wilds on The View (ABC)

Like Loading...
Those who cannot remember the past are condemned to repeat it. -George Santayana (1905), philosopher/writer
Allegiance ran on Broadway for 3 mos. during the Winter of 2015/2016, and was seen by 120,000 (which was the same number of Japanese-Americans rounded up and put in internment camps during WWII). The story is partly based on George Takei’s real life experience as a young child raised for 4 yrs in an Arkansas internment camp. Each night of its Broadway run, the veteran actor/activist/social media star, reserved a seat for (then presidential candidate) Donald Trump. Of course, Trump NEVER came to see the show!
This musical drama centers on the Kimuras, who are a close-knit farming family, yet individuals in their own right (who grow and change over the course of the play). They are sent to the Heart Mountain, Wyoming camp, which is the main setting of this story. There are armed men guarding them 24/7, a curfew is in effect at night, and the living conditions are VERY poor.
Sammy (Telly Leung, who has been chosen as the lead in Alladin) desperately wants to enlist in the army and show his allegiance to the U.S. His father says that this can never be, since they “have the face of the enemy.” BOTH men are quite stubborn! Sammy’s older sister, Kei (short for Keiko), serves as a mother-figure for him also. Kei (Lea Salonga, veteran actor/singer best known as Eponine in the original Les Mis) worries about Sammy’s future and takes care of Grandpa (Takei), who is missing his garden back home.
…after graduating from college, studying Asian American history, knowing about the civil rights era now– in a post-Vietnam War era– I think I would have done what Frankie did: You want me to fight as an American? Then treat me like an American! -Michael K. Lee
Kei (though she considers herself an “old maid”) forms a connection w/ Frankie Suzuki (Michael K. Lee), a law student from LA.  Since he’s a bachelor, Frankie has to share a cabin w/ 10 other men. His dark humor and sly wit are revealed in the rousing big band number Paradise. Frankie’s allegiance is to the Constitution; this character is based on (real life) activist Frank Emi.  I was quite impressed w/ this character; he seemed VERY fresh and modern!
Sammy and Hannah (a blonde, young Army nurse from Nebraska) become close while trying to get more medicine and supplies for the camp. They have a sweet duet (With You) which expresses their love, which is NOT safe to express.  The lyrics are simple, yet poignant; below is a sample.
If I were with you, no one else could see us this way. -Sammy imagines
If I were with you, we would fight the world every day. -Hannah replies
What can be done to end this imprisonment? Mike Masaoka (Greg Watanabe) of the Japanese Americans Citizens League (JACL) has been petitioning Congress to get his people freed. Perhaps in desperation, he proposes a loyalty test (“to root out the troublemakers”). Also, the able-bodied men MUST enlist (in a segregated unit, like the African-Americans) and take on the deadliest missions. (Masaoka was an actual person during this period in history.) Watanabe had older relatives in internment camps, as he noted in one of the behind-the-scenes interviews. I wanted to know MORE about this character!
Women weren’t just sitting around while the men faced danger. Kei and the camp’s women write letters to major newspapers and magazines to let the public know what’s going on. Kei goes after what she wants and becomes a stronger woman, as we see in Higher- a pivotal song for her character and showcasing Salonga’s powerful vocals.
In SOME ways, this play is quite traditional for Broadway- love stories, generational conflicts, song and dance. In other ways, it is groundbreaking- a cast of mainly Asian-Americans (incl. those of Chinese, Japanese, Filipino, and Korean ancestry); a Japanese-Canadian director (who had relatives in similar camps in Canada); a Chinese-American co-writer; a female orchestra leader, etc. In this current political climate, this story is a cautionary tale, NOT merely entertainment. Should we prove our worth by standing by our country, no matter what (like Sammy)? Or should we resist the unfair laws being proposed, even risking prison (like Frankie)?

NOTE: This review contains SPOILERS for the film.

This is a crowd-pleasing Hollywood movie (which I saw w/ my mom 2 wks ago), BUT about a subject we’ve NEVER heard about- three professional African-American (then referred to as “Negro”) women at NASA in the ’60s. ALL the ladies give strong performances here; they have strong chemistry that makes their long-time friendship seem real. At the center is Katherine Coleman (Taraji P. Henson of Empire)- a former child prodigy, widow, mom of 3 young daughters, and mathematician. Her mind works fast, BUT working w/ the team of engineers (under Al Harrison- Kevin Costner in a low-key performance) prepping for the first manned rocket launch IS a challenge. Katherine grows in her job, gaining confidence and respect (even from racist senior engineer Paul Stafford- Jim Parsons of The Big Bang Theory).

In some ways, the film is traditional, esp. how the problems are wrapped up quite nicely. We get the feeling that MAYBE Mary Jackson’s (Janelle Monae) hubby, Levi (Aldis Hodge- star of Underground), is NOT all in for his wife working such long hours and becoming an engineer. However, there are moments where you want to cheer, b/c these ladies are succeeding w/ SO much stacked against them (in a segregated South- Langley, VA). Even going to the bathroom is a hassle, since the “colored” restroom is located on the other side of the large campus!

This story would NOT have been told w/o the 2014 book upon which it’s based by Margot Lee Shetterly. She is the daughter of a NASA engineer (her dad); she also grew up in the same town as these “human computers.” As a youngster, Shetterley knew these ladies as neighbors and fellow churchgoers. Yes, we are in the time before IBM was a household name, though eventually Dorothy Vaughn (Octavia Spencer) learns FORTRAN to program the new computer.

Don’t worry, you don’t have to be a math/science/history nerd to LOVE this film. (I personally liked the historical elements, esp. the clothes and cars.) One of my fave elements was the slow burn romance between Katherine and a National Guardsman, Major Jim Johnson (Mahershala Ali- also in Moonlight). “It’s very rare to see a black man pursuing a black woman” (as was discussed on the JAN 25th Slate Culture Gabfest). Henson and Ali have great chemistry. The surprise proposal/family dinner scene had me in tears!

Films like this are important, esp. today when certain world leaders are trying to close-up borders, restrict (legal) immigration, and creating unease (in anyone who isn’t straight/ white/Republican/ male). Why NOT take the example of astronaut John Glenn (Glen Powell) in this film?  According to historians (and his contemporaries), Glenn was considered “ahead of his time” when it came to race relations. Though one of the white women supervisors tried to rush him inside, Glenn (who later became an Ohio senator) walked over to where the black computers were standing in the welcome line; they shook hands and chatted briefly. Without the combined work on dozens of black women, he would never have gone into space! 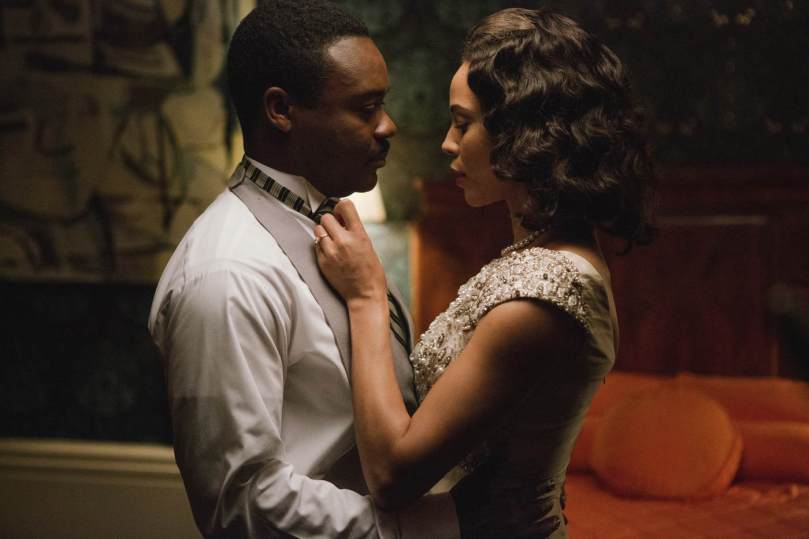