Six men and three women – against the sea and each other. -One of the taglines from the movie

…this is what is best about Hitchcock – when he wasn’t busy being a technical show-off, he always kept his mind on thrilling and enthralling the audience. A director who plays TO an audience, pandering to a specific set of sensibilities, will make films that will only ever appeal to the tastes of one era. Hitch on the other hand plays WITH the audience, and this has made his pictures stand the test of time.

Given the time when this was made… it’s hardly surprising that it’s filled with propaganda. Usually, this annoys me; but here it’s done really well, and the propaganda is actually worked into the story instead of just being there to rally the allied population at the time. Hitchcock turns this into a twist, and the way that he parodies the war on the whole on just a small lifeboat in the middle of the big ocean is great.

In the Atlantic Ocean during WWII, a passenger ship and a German U-boat are involved in a battle where both are sunk. The survivors gather in one of the lifeboats. They come from a variety of backgrounds and places: an international journalist- Connie Porter (Tallulah Bankhead), a rich businessman- Charles Rittenhouse (William Hull), a young/Midwestern nurse- Alice MacKenzie (Mary Anderson), a steward- Joe Spencer (Canada Lee), a humble British sailor- Stanley Garrett (Hume Cronyn), and a hard-edged engineer from Chicago- John Kovac (John Hodiak), along w/ his affable buddy- Gus Smith (William Bendix). Stanley and Joe help bring a young Englishwoman carrying a baby in her arms onto the boat- Mrs. Higley (Heather Angel). Trouble starts when they pull another man out of the water- Willi (Walter Slezak)- who turns out to be from the U-boat (German). Some of the survivors want to thrown him back, but others intercede. Connie speaks fluent German, so she can communicate with this man.

It all started when Hitchcock wanted a challenge for himself. He commissioned American author John Steinbeck to write a story based on an idea he had for a drama about people in a lifeboat. Steinbeck’s work was adapted by Jo Swerling; Ben Hecht was also a collaborator in the screenplay. This movie (which cost a little over $1.5M) was shot entirely on a restricted set; the boat was secured in a large studio tank. Hitchcock, striving for realism, insisted that the boat always be moving. The harsh conditions of the shoot took its toll: actors were soaked with water and oil, which led to illness and injury. Cronyn once almost drowned and cracked some ribs! Production was halted twice to allow for recovery of the cast. The famed director insisted on shooting in sequence (which is rarely done), which meant most of the cast had to be paid for the entire shoot. When studio head- Darryl F. Zanuck- objected, Hitch insisted this was necessary to shape the unconventional narrative.

Wow, this movie is impressive- I wonder why I never heard of it before! Like all great films, it takes you on a journey. Hitch made a lot of great films. Lifeboat is lesser-known; I just discovered it last week (thanks to a brief review on YouTube). Hitch succeeds in scene setting and drawing the audience into the story. The way he uses his camera aboard the lifeboat keeps the audience plugged into the plight of the characters. The plot is simple, yet a great premise for a thriller. Its a study of how difference of opinion can create tensions, and how people can deal with those tensions.

The characters are all distinct and each actor does well w/ their role. During filming, several crew members noted that Bankhead was not wearing underwear. When advised of this situation, Hitch commented, “I don’t know if this is a matter for the costume department, make-up, or hairdressing.” LOL! Bankhead (then in her early 40s and a big star) had a style which was later adopted by an younger actress- Bette Davis. Bankhead joked that “All About Eve” should’ve been titled “All About Me” after that hit film came out. In the first scene, we see Connie w/o a hair out of place, wearing a mink coat, made-up, and smoking a cigarette. She looks more annoyed at the run in her stocking than the destruction surrounding her! Connie conveys toughness also, but little by little, her true self comes out as she faces the harsh reality.

It is rare to see such a meaty role for a black American at this time period; Lee even wrote some of his own lines for Joe. Once the film was completed, Steinbeck (who was very progressive) objected to the tone Hitch used w/ Joe in certain scenes. Lee had also acted on Broadway in a lead role in Anna Lucasta. Before he became an actor, he worked as a jockey, boxer and musician. Lee was also a civil rights activist, following in the footsteps of actor Paul Robeson (considered to be a Renaissance Man in his time). My favorite scene in Lifeboat is when Kovac asks Joe for his opinion on what to do w/ the German enemy. Joe replies simply he didn’t realize he had any vote or say in the matter! This was 20+ yrs before the Voting Rights Act.

People ask me “Don’t you feel uncomfortable being compared to a rapper?” Why would I? We have a lot in common like being born and raised in Brooklyn. -Ruth Bader Ginsburg

If you’re not watching #RBGMovie you are missing one of the great multi layered love stories. Love of the law, love of knowledge, love of equality and above all, love of marriage as a true partnership, bursting with mutual respect. Ruth Bader Ginsburg is an American original. -Tom Harrington (CBC Radio)

The love story between Ruth and Martin Ginsburg is nothing less than awe-inspiring. I love how she tells about her undergraduate years at Cornell where there was a four to one ratio of boys to girls. “Every mother wanted to send their daughter there because, if you couldn’t find a husband there, you were hopeless.” She reveals that during her freshman year, she never dated the same boy twice. That is, until she met Marty, who was the first guy that recognized she had a brain. -Excerpt from IMDB review

He was okay playing second fiddle. In fact, he joked about it… -Nina Totenberg (NPR legal correspondent) on Marty, a very successful tax attorney in NYC, who moved to DC when his wife’s career took off.

The film traces RBG’s life from her childhood in Brooklyn through her years struggling to be taken seriously as a young female law student  and practicing attorney, and through her tenure on the SCOTUS and emergence as a pop culture icon. The storyline is mostly linear, but includes frequent jumps backward, forward, and even sideways as it examines different aspects of her life, personality, and public image. There’s a mix of historical photos, videos, but the main draw are the interviews. We hear from Ginsburg’s children, childhood friends, colleagues, admirers and a few detractors, as well as fellow feminist icon Gloria Steinem, former Pres. Bill Clinton, and Ginsburg herself.

Some of the cases RBG argued before the SCOTUS:

You may remember these (high-profile) cases that RBG presided over:

A granddaughter, Clara Spera, who recently graduated from Harvard Law School, explains that this was the first year that the graduating class was 50% male and 50% female (WOW). Jane and James (her adult children) recall how their mother rarely laughed, stressed education and personal responsibility, and was a horrible cook (LOL). Her husband, Marty, worked hard by contacting people from the business and legal communities to get RBG (then aged 61) to the top of the list for Supreme Court justice in 1993. Pres. Clinton was very impressed by her interview. RBG, who even won the admiration of Sen. Orrin Hatch (R-UT), was confirmed 96-3 in a quite partisan time. This is a MUST-SEE documentary (for people of ALL ages)! 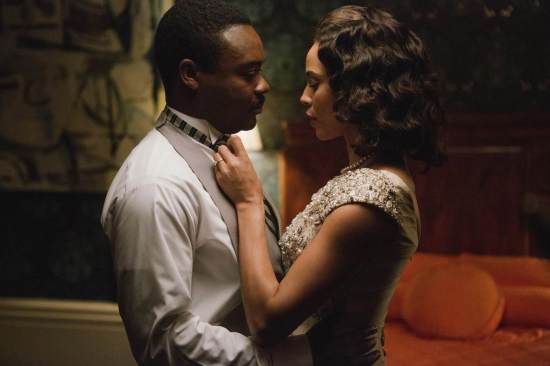