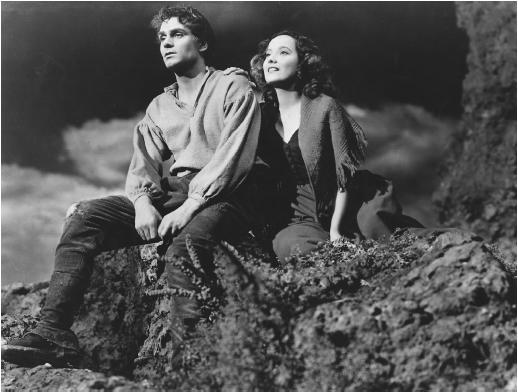 This classic film stars Laurence Olivier (Heathcliff) and Merle Oberon (Cathy), and David Niven (Edgar Linton).  The music (at times) is a bit too much, but the acting is top-notch.  The characterization is close to the book, b/c HC can be quiet, intense, yet sweet.  C is quick, proud, and changeable.  The narrator, Ellen (sometimes also called Nelly) is the calm, observant housekeeper.

The boy Heathcliff (HC) tries to ride away on Mr. Earnshaw’s horse before his protector can even take him inside the house!   Hindley (H) grabs HC’s horse by the reins, then attacks him w/ a rock and his fists.  H also threatens to tell his father that HC will throw H out of the house when he was old enough.  (This is all made up by H, of course.)  Instead of crying, the little HC vows to “pay him back, no matter how long it takes.”

I really liked the scenes btwn the kids, such as riding fast though the moors, H pretending to be a prince defeating “a black knight,” and making C queen of his (actually a large crag).  HC, who is put in the role of stableboy, after Mr. E’s sudden death, is referred to by Hindley as “gypsy beggar” several times.  Finally, HC collapses into tears, realizing he has no protector, and won’t be able to speak to C.  HC works alongside Joseph, the older scripture-quoting manservant.

The teenage HC tells C that “nothing’s real down there [Wuthering Hts], our life is here” when they hang out (as teens) at the crag.  C is the one who urges him to “run away and come back a prince” to “rescue me” from the controlling older brother.  (Since we’re talking about Olivier, HC really does look like a prince!)

One night, HC & C peep in on the Linton family having a big, fun party (music, dancing, fancy clothes).  These things appeal to C as she has no experience w/ them. 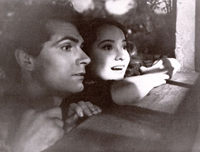 When C returns after several wks, in new clothes, w/ Edgar (E) in tow; she’s surprised that HC is still there.  Instead of hugging him, she treats him coldly.  There is great sadness in HC’s eyes in this scene.  But when she’s alone w/ Edgar, he calls HC a “begger” and “gypsy.”  C becomes very angry, and admits her feelings for HC!  E is shocked; he says that some of HC has rubbed off on C.

HC & C are attacked my guard dogs outside (just as in other film versions), but here HC goes in and refuses to leave w/o C.  HC embraces the injured C, then she quietly tells him to leave.  Before he goes, HC curses the Lintons.  HC vows to return “and bring this house down.”

In the next scene, C casts off her new finery- the civilized world.  She runs to the crag, into HC’s arms, and exclaims that she “will never change.”  HC tells her how he (almost) sailed off to America while she was gone.  Then, while gathering arm heather, the young folks share their first kiss!

“My moods change indoors,” C lightly tells HC when he asks why Edgar is coming to W Hts again.  HC says that her “vanity” has changed her; C calls him “dirty.”  She says that he had a chance to escape and “be somebody,” but he didn’t take it.  Suddenly, HC slaps her with his dirty hands.  When walks down the stairs, his face is struck with regret.  Later, he shatters the barn windows with his bare hands!  Ellen is shocked to see what HC has done to himself; he admits his feelings to her.  When C comes down after her “date,” HC hides in a corner.  Next up is (perhaps the most important) scene in the book and film…

C is disappointed b/c HC has “grown worse” day by day.  She has decided to marry E, because she sees no other (sensible) choice.  “It would degrade me to marry him,” C says, but she also compares the Lintons to “angels” and “frost.”  She confesses that “HC is more of myself than I am.”  HC is suddenly heard galloping away from the house!  The horrified C runs out (in the wind, rain, and muck), calling his name and crying.  (In this version, she runs for a long while!)

When C is finally found, the Dr. Kenneth recommends that she stay for some time w/ Mr. Linton, Edgar, and his little sister, Isabella (I), at their house.  Staying with (the often drunk) HC would not give her “quiet” and “order,” the local doc comments.  E wants C to stay forever, so she agrees to marry him.  C tells him that she’s become “who I wanted to be.”  Though a “cold chill goes over the heart” moments after the wedding, C and E have “a growing love” the next few years.

Then one night, Ellen announces that HC has returned (from America); he’s now “a fine gentleman.”  This is another crucial scene; HC and C are conversing (though their eyes).  HC bought W Hts and surrounding area secretly; H loaded down w/ gambling debts, could do nothing to change that.  When H asks for a drink, Joseph says that Dr. Kenneth forbade it.  (In this film, he doesn’t lose his young wife in childbirth, but he’s deeply depressed still.)  HC, the new master, tells Joseph to let H drink.  “I allow you to stay here,” HC coolly tells his former “brother.”  H, his hands shaking, threatens HC with a pistol.  But he can’t bring himself to kill.

One day, I (who noticeably has a huge crush on the guy) makes up an excuse to visit HC at W Hts.  She says C is upset with him, as is E.  She wants to be a friend to HC.  He boldly tells her that she is “lonely,” and it “must be hard to be lonely in a happy house”.

I invites HC to a party at the Grange, much to her father and brother’s surprise.  I says HC can hold her hand, but he only has eyes for C.  When I wants to dance the waltz w/ him, he comments that gypsies can dance, too.  (I thinks he refused b/c of his “high moral character.”  Poor, deluded girl!)

Out on the balcony, C politely calls HC “grand and handsome.”  He quietly replies: “Life has ended for me.”  C gets distressed when he mentions their old life (they still changes moods so quick!), and tells him to never enter her house again.  He says their love is more powerful than both of them, and that “you willed me here across the sea,” he says.

After the party, C warns I about HC.  (The two ladies have it out here- loudly!)   I says that HC loves her and wants them to marry.  C slaps her, telling her that “HC is not a man- but a dark thing!”  I says that C is jealous and doesn’t want HC to be happy, only “pine for you.”

C goes to see HC to corroborate I’s story.  More really good dialogue here…  C says not to punish I for what she has done.  HC says that if only C would love him like she used to, he’d “be her slave forever.”  But she has chosen “virtue” and “the world,” thinking of his kind of love as “vile.”

When she tells E about the impending marriage, he runs up to I’s room.  Too late- she’s written a letter saying she’s run off w/ HC.  Watch C’s face as she tells her husband to “go after him with you pistols and stop them.”  It’s good stuff!  E realizes the strong hold HC still has on C.

Old, concerned Dr. Kenneth comes to see H (close to death), and notices how weak I is, too.  He sadly comments: “Whatever ails in this house is beyond my healing powers.”  The doc advises I to go back to her brother.  E needs her b/c C is “gravely ill.”  I’s reaction to this shocks the doc.

Soon after this, Nelly comes to W Hts to fetch I home.  But I still clings to HC, though he says that “only hate is in this house.”  HC quickly guesses that C is dying, and rides off toward the Grange.  Then we have the (very dramatic) scene at C’s deathbed; I liked this almost as much as the 1992 film (w/ Binoche and Fiennes)!

There were certain crucial scenes where Ralph Fiennes chose to play HC as quite dark and uncontrolled.  There is often an unstable look in his eyes, and a sneer on his face.

There is GREAT chemistry btwn Fiennes and (always terrific) Juliette Binoche.  Maybe this is b/c they are both so comfy in these roles; they don’t have to push to relate to these characs.  Binoche has ALL the right qualities to portray Cathy. 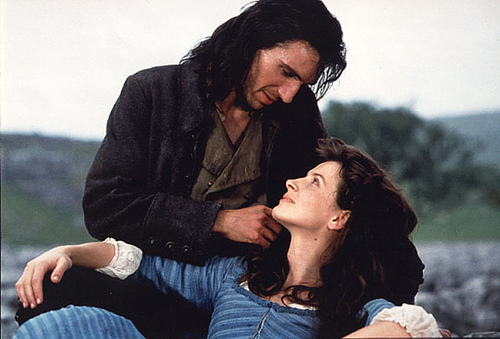 Olivier, who looks powerful and striking even in rags, has a more controlled anger.  He’s able to become a (believable) gentleman, like in the book.  Fiennes was more threatening, even as a posh gent.  The moments of sadness/regret are very well done by both actors.  (It takes a mulit-faceted guy to get Heathcliff right!) 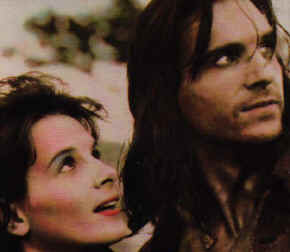 Check out BOTH of these films!