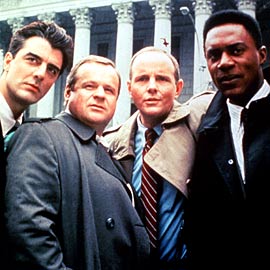 As you may’ve heard, the original L&O series has ended on NBC.  I didn’t see the last episode; I stopped watching it regularly a few years ago.  In recent years, I paid more attention to L&O: Criminal Intent and SVU (watched religiously for many years. )  L&O started out as a cutting-edge show in the early ’90s w/ timely and controversial storylines.

The show’s top cop was life-weary veteran Det. Lenny Briscoe (Jerry Orbach: 1935-2004).  Orbach came from the theater where he acted, sang, and danced.  L&O’s best lawyer was highly principled ADA/Executive DA Jack McCoy (Sam Waterston).  Waterston is a classically-trained actor who made his mark in film, too.  McCoy hated hypocrisy and compromise, but could fight cleverly, too.  Plus, he had a cool motorcycle!  L&O has been a showcase for experienced actors and a launching pad for younger ones just starting out in the business.

In the beginning, the characters had great chemistry together, especially Briscoe and his younger partner, Det. Mike Logan (Chris Noth).   Briscoe (recovering alcoholic) and Logan (hotheaded womanizer) were street-wise, working-class guys who had little or no interest in promotions/politics.  They just wanted to catch the bad guys.  Who could forget the story Logan told of his alcoholic mother regularly beating him with the Bible?  Sorry SATC fans, but we L&O fans saw Noth first!  (Logan kept reappearing in other series b/c fans, as well as Dick Wolf, liked him so much!)

On to the prosecutors…  The serene and intellectual Paul Robinette (Richard Brooks) was a terrifc foil to passionate ADA Ben Stone (Michael Moriarty).  Robinette had a terrific speaking voice that exuded confidence and serenity.  Stone, on the other hand, was more openly idealistic and passionate.  In later years, Robinette made a guest starring role as a defense attorney.  Why was Brooks, a young African-American actor, let go?  It was to make way for another minority group- women.

No doubt about it, L&O has had some fine women in its cast, including the very capable Lt. Anita Van Buren (S. Epatha Merkerson).  Jill Hennessey’s L&O role was a far cry (and far better acting) than her star turn on Crossing Jordan.  Jill was very believable as a lawyer.   Claire and Jack’s ambiguous personal relationship was discussed by many fans.  Former Bond girl Carey Lowell was very believable as upper-crust, no-nonsense prosecutor Abbie Ross.  Angie Harmon’s character (Abbie Carmichael) was not written w/ subtlety like Claire or Jamie, but she did a good job w/ it.  Angie has a very strong physical presence, like Benjamin Bratt (who played Det. Rey Curtis).

Unlike many L&O franchise cops, Rey was a grounded family man w/ traditional values.  He stuck by his wife and kids when she got ill.  Briscoe couldn’t believe that Rey only fantasized about his wife.   A classy guy in a very classy show…