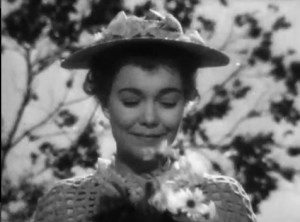 This film is based on Edna Farber’s novel of the same name.  It was directed by Robert Wise, who later directed The Sound of Music.  Farber also wrote Giant, which was made into a film starring Elizabeth Taylor, Rock Hudson, and James Dean.   Like Giant, So Big is a story of family and values.

Selina Peak (Wyman) is a teenager at a girls’ boarding school in 1890s Chicago when her father suddenly dies.  His huge fortune has dwindled down to nothing, and even household furnishings must go to auction, including a fine portrait of Mr. Peak painted by John Singer Sargeant.  Because of her close friend Julie’s father, Mr. Hempel, Selina gets a position as schoolteacher in the small farming town of New Holland, a community of Dutch immigrants several hours away from Chicago.  Mr. Hempel made his fortune by selling hogs to the town, and he’s grateful.

Selina approaches her new, no-frills type of life with cheerfulness, remembering a lesson her father taught her- there are two kinds of people in this world, wheat and emerald.  The people who take care of the land, grow food, and provide for the survival of others are wheat.  Those who see the beauty of the world and work in creative ways are emerald.  The world needs both kids of people.

Selina boards with the warm-hearted, yet traditional, Pool family and begins teaching in a one-room schoolhouse.  Roelf, the adolescent son of the Pools, already works in the fields with his father.  Though he’s “too old for school” unlike his two sisters, Roelf still has a desire to read and improve his piano playing.  Selina recognizes Roelf’s potential, and encourages him by giving lessons at home and allowing him to use the school’s piano.  Roelf (emerald) wants to get out of New Holland and see the world.

At the church box supper auction, Selina meets Purvis DeJong (wheat), a tall and rugged widower who’s courting a wealthy older widow.  Purvis’ head turns toward Selina, and he goes quickly to her side, much to the amusement of the locals.  They make fun of Purvis because his farm is in the lowlands and doing badly.  He admits to Selina that he doesn’t have “a head for figures.”  Buyers at Hay Market swindle him when he goes to sell his meager crops.  Selina decides to give him math lessons.  Purvis calls her “Little Lina” and seems more interested in romance than studying.  This upsets Roelf, who has a huge crush on his teacher.

Eventually, Lina marries Purvis and settles into the role of a farmer’s wife.  She has a son named Dirk, who is nicknamed So Big, because she has big plans for his future.  Dirk sees beauty in everyday things, like his mother.  “A modest amount of success” comes to Lina as the farm specializes and modernizes.  Lina is able to send her son to college to become an architect.  Though he seems to be a kind young man, Dirk wants success to come quickly, envying the comfortable lives of his wealthier peers and social-climbing girlfriend.  Lina, who values hard work, worries that Dirk is embracing the wrong values of the modern age. 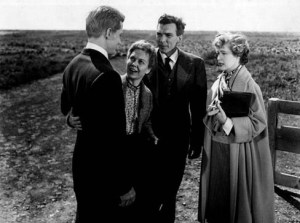 Lina embodies the pioneering spirit of American women of the late 20th century.  These were the women who left established cities, worked beside their husbands and children on humble farms, and valued an honest day’s labor.  They didn’t have much time to cry or complain.  They had to work to survive, so their children wouldn’t have as much to struggle against.  These were the mothers who raised “the greatest generation.”

This is a film about love, romance, and forgiveness.  Ruth (Wyman) is a hardworking secretary for a shoe company in NYC who’s scarred by the fact that her musician father abandoned the family when she was a girl.  Her mother, who’s depressed and in frail health, tells her never to trust men because “they’re all nice, until they find someone else.”  Ruth rarely has time to go out or meet eligible men, as she must care for her mother.

One rainy day after work, Ruth meets Art (Van Johnson), a talkative and cheerful soldier from Tennessee.  He’s stationed nearby and doesn’t have much to do, so he invites himself to her apartment.  Art makes himself at home, even singing and playing the (long-silent) piano.  Ruth hands Art an unfinished composition of her father’s to show to his songwriter friend.

Like that song, the main issue in Ruth’s life, is unresolved.  We learn that her father is playing at a fine restaurant in the city,  but he can’t face his family yet.  And falling in love with Art is not the end of Ruth’s story; he’s a catalyst for positive change in her life.