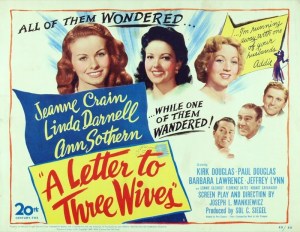 Three VERY different women (who happen to be in same social circle in a small town near NYC) get a letter from another, Addie Ross, stating that she has run off w/ ONE of their hubbies.  Then we get closer glimpses into their respective relationships w/ their men.

Deborah (Jeanne Crain) is the newbie in town, having married her guy (“nice and has money”) while they both served in the navy.  Leaving that old life and uniform (“the great equalizer”) behind, the former farm girl feels insecure in the upper-middle class, country clubby community.  Rita (Ann Sothern) is a confidant working mother (radio show writer) who’s married to proud schoolteacher George (Kirk Douglas).  Working -class Lora Mae (Linda Darnell) married up when she wed her older boss.   They bicker and insult each other constantly, though their pals are used to it.

I esp. enjoyed seeing Douglas is a lighter role; this was BEFORE he become a headliner.  His character was VERY smart, principled, and fun to watch.  Darnell was also VERY good as a woman who protects herself by being TOO much of a realist and plain talker. 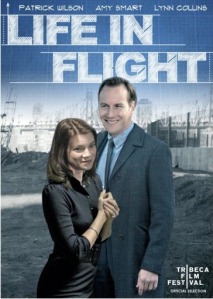 Will (Patrick Wilson) seems to have the perfect life: large brownstone, socially poised wife, cute young son, and a great job (architect).  But he’s NOT happy w/ they way his life has been going lately; he’s under pressure to sign a contract w/ a huge contruction firm that he’s been dealing w/ for 2 yrs.  His wife Catherine (Amy Smart) is eager for them to make more money and take an expensive vacation w/ her well-heeled pals.

Then Will meets Kate (Lynn Collins), a free-spirited urban designer at a mutual friend’s party; they seem to have instant chemistry.  Will doesn’t mention that he’s married; he chooses NOT to wear a ring.  He looks over Kate’s designs and is impressed.  But Kate may get an offer from an LA design firm soon.

I liked Collins character b/c she was good at portraying a sensitive young woman who’s at a crossroads in life, uncertain of what step to take next.  However, this film is a BIT slow and NOT as well-developed as I thought it would be.  Smart’s character is pretty one-dimensional.  The acting could’ve been stronger, though the minor players did fine IMO.  The themes are current.  I loved seeing NYC, of course!