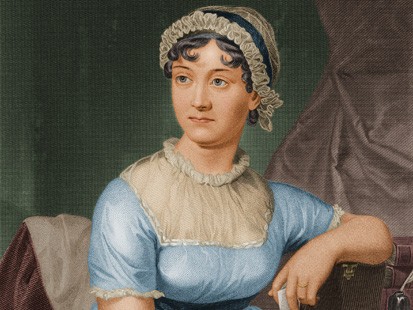 A portrait of Jane Austen

It is a truth universally acknowledged, that a single man in possession of a good fortune must be in want of a wife.

Thus begins one of the most-loved/discussed novels of English literature.  It has been read in high schools, colleges, etc., by most of the women we know.  We keep coming back to this book, and don’t forget the numerous TV/film adaptations.

It seems like Lizzie and Darcy are almost as iconic as Romeo and Juliet when it comes to famous couples.  Other relationships are also important: Lizzie and her beautiful/shy older sister Jane, Lizzie and her hands-off father, Mr. and Mrs. Bennett (an odd couple), Lizzie (romantic) and older friend Charlotte (practical), etc.  Let us focus on the main love story…

She is tolerable; but not handsome enough to tempt me; and I am in no humour at present to give consequence to young ladies who are slighted by other men.

Ouch!  Suffice it to say, Darcy does not make a positive first impression on Lizzie, her family, and the community-at-large.  He doesn’t even dance once at the assembly ball in Meryton, which makes him look proud, vain, and disagreeable.  (He later explains that he’s not at ease talking to strangers.)

A geological sample of Darcy’s core, as portrayed so beautifully by Firth, would show the following layers:  at the bottom, his breeding and wealth.  Undeniable.  On top of that, confusion, the push-pull of class–egad, 10,000 pounds a year and a house 10 times larger than Downton Abbey!  -Elinor Lippman, Huffington Post (January 28, 2013)

Mr. Darcy soon drew the attention of the room by his fine, tall person, handsome features, noble mien; and the report which was in general circulation within five minutes after his entrance, of his having ten thousand a year.

Mr. Darcy’s sly humor comes out when Lizzie and Caroline are walking about the room.  (Lizzie went to Netherfield, Bingley’s house, when Jane became ill.)

You either chuse this method of passing the evening because you are in each other’s confidence, and have secret affairs to discuss, or because you are conscious that your figures appear to the greatest advantage in walking; — if the first, I should be completely in your way; — and if the second, I can admire you much better as I sit by the fire.

Yes, vanity is a weakness indeed. But pride — where there is a real superiority of mind, pride will be always under good regulation.

Well, Darcy knows he’s an eligible bachelor, but he won’t be caught easily.  (He’s not easily impressed-  he’s still be a bachelor at the age of 28.)

…But disguise of every sort is my abhorrence. Nor am I ashamed of the feelings I related. They were natural and just.

Darcy’s first proposal is is very surprising to Lizzie- she tells him off!  (After all, she thinks he’s treated Wickham very unfairly and ruined Jane’s chance at happiness with Bingley.)  I really like the lines above that Darcy says, about how he hates to hide his true feelings. 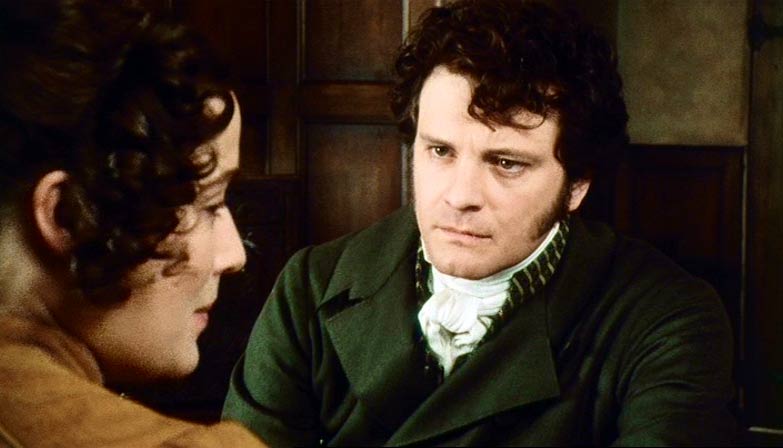 When all hell breaks loose (because of Lydia’s running away with Wickham), Darcy becomes very concerned.  We see his sympathtic side (above), but we won’t discover until much later just how much he has helped the Bennett family.  (Actions speak louder than words.)  If Lydia and Wickham hadn’t been married off quickly, then the the other sisters would’ve been tainted for life.  Elizabeth felt guilty because she hadn’t revealed Wickham’s true character to others; Darcy had to protect Georgiana, his teenage sister, so he couldn’t expose Wickham either.

…Let me thank you again and again, in the name of all my family, for that generous compassion which induced you to take so much trouble, and bear so many mortifications, for the sake of discovering them.

If you will thank me,” he replied, let it be for yourself alone.  That the wish of giving happiness to you might add force to the other inducements which led me on, I shall not attempt to deny. But your family owe me nothing. Much as I respect them, I believe I thought only of you.

The crisis, and its aftermath, propels the love story forward, though the couple are not together.  Lady Catherine becomes a catalyst when she barges in on the Bennetts and insists that Lizzie never become engaged to her nephew.  Darcy hopes to have another chance with Lizzie.  (Bingley and Jane finally getting engaged brings happiness to them both, too.)

As a child I was taught what was right, but I was not taught to correct my temper.  I was given good principles, but left to follow them in pride and conceit.  Unfortunately an only son (for many years an only child), I was spoilt by my parents, who, though good themselves (my father, particularly, all that was benevolent and amiable), allowed, encouraged, almost taught me to be selfish and overbearing; to care for none beyond my own family circle; to think meanly of all the rest of the world; to wish at least to think meanly of their sense and worth compared with my own.  Such I was, from eight to eight and twenty; and such I might still have been but for you, dearest, loveliest Elizabeth!  What do I not owe you!  You taught me a lesson, hard indeed at first, but most advantageous.  By you, I was properly humbled.  I came to you without a doubt of my reception.  You shewed me how insufficient were all my pretensions to please a woman worthy of being pleased.

How can you not love such words, these characters, and such a terrific ending!?