This is a great little movie filled with real life heartache and genuine emotion. Bette Davis gives a strong performance as the matriarch of the family determined to give her only daughter a proper wedding even though the family can’t afford to do so.  Ernest Borgnine is perfectly cast as the slovenly, hard working taxi cab driver.  In fact, everyone is up to par in this film, but it’s the real life situations that tug at your heart strings.  –IMDB review

The trick is not to become somebody else.  You become somebody else when you’re in front of a camera or when you’re on stage.  There are some people who carry it all the time.  That, to me, is not acting.  What you’ve gotta do is find out what the writer wrote about and put it into your mind.  -Ernest Borgnine on his method of acting

I watched this film, written by Paddy Chayefsky (Marty), last weekend w/ my parents; they had seen it before and really liked it.  It took me a FEW minutes to realize that the mother was Bette Davis- LOL!  She is totally transformed; they gave her a “make-under,” as we’d say today.  Tom (Borgnine) and Agnes Hurley (Davis) are working-class/devout Irish-Catholics living in a small apartment in the Bronx with a daughter, son, and Agnes’ older brother.  Tom, a taxi driver, has been saving money for many years to buy a cab and license (medallions don’t come cheap nowadays either).  They both become concerned when their eldest child, daughter Jane (Debbie Reynolds in an early role), announces that she’s getting married to her long-time beau, a teacher- Ralph (Rod Taylor). 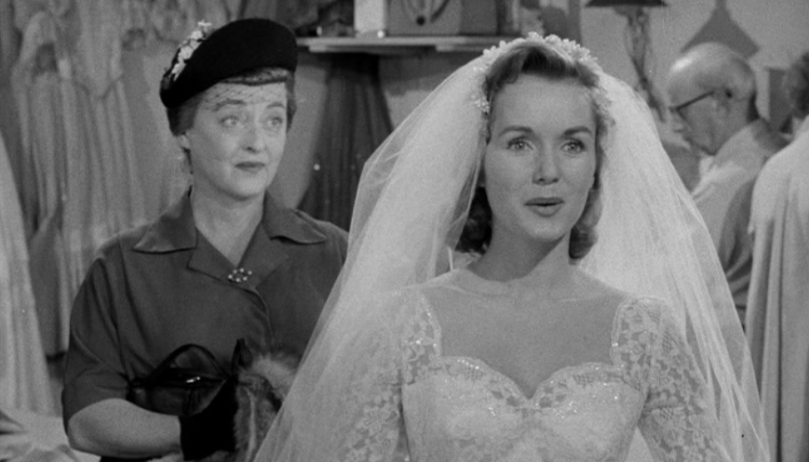 Jane, who has an office job, insists that she wants a very small wedding and no reception.  Agnes thinks that’s not good enough, lamenting to Tom: “We never did anything for that girl!”  Agnes knows what she missed out on, and now wants those experiences for her daughter.  In no time, Jane’s wedding planning gets out of hand, thanks to the wishes of Agnes and Ralph’s parents (who are more better off financially).   Jane tells Ralph she doesn’t want to end up like her parents.  We learn more about the Hurleys (strained/seemingly loveless) marriage.  Agnes awkwardly tells Jane that marriage is not like dating; there will be sacrifices and compromises (mostly made by women).