Kind of man that walks around with nothing in his pockets, no identification because everyone knows who you are. No cash because anyone in town would be happy to lend you anything you need. No keys ’cause you don’t keep a lock on a single thing you own. And no watch because time waits on you.  –Wade (Robert Mitchum) explains to his 18 y.o. son Theron (George Hamilton) about the kind of man he should aim to be

“Wow, what a speech!”  My dad commented.  Plus, who doesn’t LOVE Robert Mitchum!?  He was the quintessential “man’s man” (NOT unlike George Clooney is today).  If you read this blog, you know that I’m a BIG fan of Mitchum’s acting!  In this (dysfunctional) family drama set, he plays wealthy, womanizing, and hard-drinking Texan- Capt. Wade Hunnicutt.  (Warning: It’s a LONG film, but has some VERY fine moments!)  I saw it on TCM last month; you can check it out for $2.99 on Amazon Instant Video.  This film, b/c it came out in 1960, could pull the cover off topics which were hidden/NOT directly mentioned in previous decades. 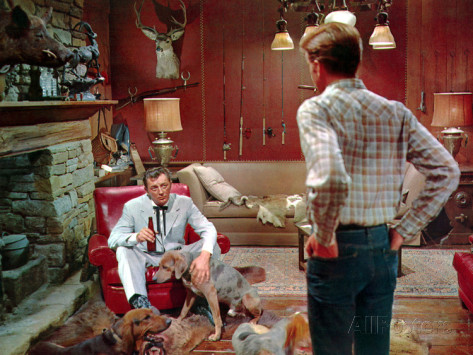 He’s got a mind of his own. I gave him that. Don’t think he’s gonna come to heel like one of your hunting dogs at the snap of your fingers.  -Hannah (Eleanor Parker) explains to Wade about Theron

Mitchum suits his role VERY well, BUT he’s well-matched by onscreen wife Eleanor Parker.  (The actress, best known for the playing curvy/glam/ independent baroness in The Sound of Music, passed away almost 2 yrs. ago at age 91.)  But unlike that iconic role, Parker has a VERY different look in this film- she’s thin, dressed prim/proper, yet also a fighter (in her own way).

Theron (a bright, kind, sensitive, yet sheltered young man) has to navigate his parents, falling in love (first time), and more.  For most of her son’s life, Hannah has kept him away from his father and his bad influences.  One Summer, Wade decides that he must teach the boy “how to be a man.”  In time, Theron discovers a BIG secret about his family!