I watched this w/ my mom (On Demand); my dad lost interest after a few scenes, but saw it the next day.  It’s a more slower film than I expected, but it DOES have it’s moments (patience gets you the payoffs).  Tom Hanks is VERY good (in a low key manner), BUT it’s Mark Rylance (known across the pond for his work in theater) who captures the viewers’ curiosity.  His character is lean, mostly still, and deeply haunted.  I really liked the music (by Thomas Newman) and cinematography (by Janusz Kaminski, a frequent collaborator of Spielberg).

I’d heard a LOT of praise about this film on various podcasts, and finally went to see it last weekend w/ two of my gal pals.  We ALL liked it (even given the VERY difficult subject matter); the small audience seemed to agree.  You will be in tears, or close to it (like I was), several times during the story.  Jacob Tremblay is in a league of his own among child actors!  The director said that he didn’t need much directing to do his scenes.  And the lovely/relatable Brie Larson is NO slouch either- hope to see more of her in the near future. 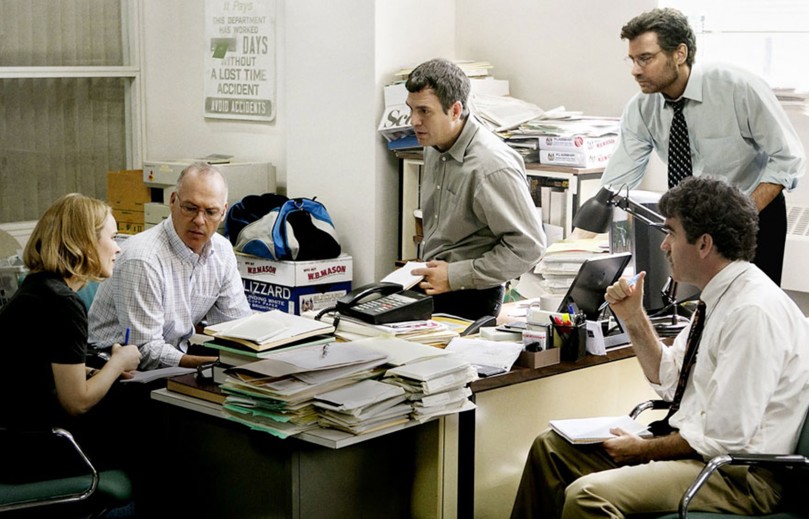 Some of you may know of  dir. Tom McCarthy from his work as a character actor; he really hit it out of the park w/ The Visitor in 2007 (starring Richard Jenkins- the voice of the former priest turned psychologist here).  With this (fact-based) film, he reaches an even higher level of acclaim- MUCH deserved!  The people are NOT glammed up or overacting- they are simply telling a VERY important story.  I esp. enjoyed Michael Keaton (Robby Robinson, editor of the Spotlight investigative team) and Stanley Tucci (hardworking Armenian-American plaintiffs’ lawyer- Mitchell Garabedian).  I wanted to see MORE of Tucci, but who doesn’t!?  Marty Baron (Liev Schreiber) was the newbie managing editor of The Boston Globe in 2001; unlike most of the (Catholic) staff under him, he was Jewish.  Mark Ruffalo (lead writer Michael Rezendes, of Portuguese heritage) was going through a separation; he loved his work and threw himself into it (esp. after meeting Garabedian).