SPOILERS: Don’t read this review if you have not yet seen or don’t want to know details from the Season 6 premiere of Game of Thrones.

I saw him in the flames fighting at Winterfell. -Melisandre says despondently re: Jon Snow

I can’t speak for the flames, but he’s gone. -Davos replies solemnly

The wait is over… BUT Jon Snow is STILL dead!  Davos (Liam Cunningham) finds the body, perhaps wondering why there isn’t MORE blood on the ground.  Edd (Ben Crompton) and a few other men (who were loyal to Jon) lock themselves inside (the Lord Commander’s chamber?) and think of what action to take next.  Melisandre (Carice Van Houten) is nearby (in an interior room); she doesn’t come off as her usual self- arrogant and bossy- having suffered setbacks in S5 (incl. the loss of Stannis).

Your pain will be paid for 1,000 times over, I wish you could be here to watch.  -Ramsay says to the dead body of Myranda

Ramsay (Ioan Rheon) takes some time to mourn Myranda before declaring that her remains will be fed to the hounds (YIKES)!  Roose (Michael McElhatton) tells his bastard that there will be NO future for Ramsay if he doesn’t get Sansa (a noble gal from Northern fam) back and produce an heir.  We know from S5 that Walda is already pregnant (possibly w/ a son, according to the local maester).

The ep really kicks into gear when “I’m no lady” Brienne (Gwendolyn Christie) and trusty squire/sidekick Pod (Daniel Portman) come to Sansa (Sophie Turner) and Theon’s (Alfie Allen) rescue. “Brienne is, at this point, the most heroic character in Game of Thrones who actually gets things done… she’s motivated pretty much entirely by the desire to be honorable and find someone worthy to protect. She has no ambitions of her own, no greed, no selfish agenda,” as TV critic Charlie Jane Anders wrote.  I esp. liked how Pod had to help Sansa w/ her side of the oath. 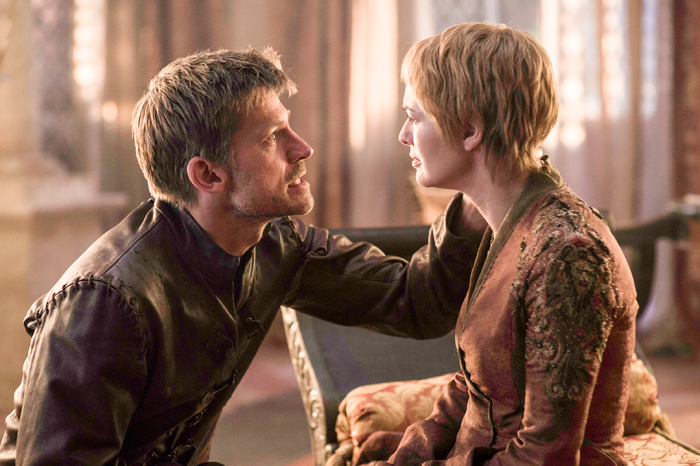 I don’t know where she came from. She was nothing like me. No meanness, no jealousy – just good. I thought if I could make something so good, so pure, maybe I’m not a monster.  -Cersei comments re: Myrcella to Jaime

Cersei (Lena Headey) runs out to see the Dornish ship, but soon sees that the boat coming toward shore carries Jamie (Nikolaj Coster-Waldau) and a golden shroud (covering the coffin of Myrcella).  In the next scene, she looks defeated, depressed (having lost 3 kids, as the witch prophesied MANY years back), and tired.  Surprisingly, Jaime is the one that vows revenge (though he doesn’t get the BEST lines here). 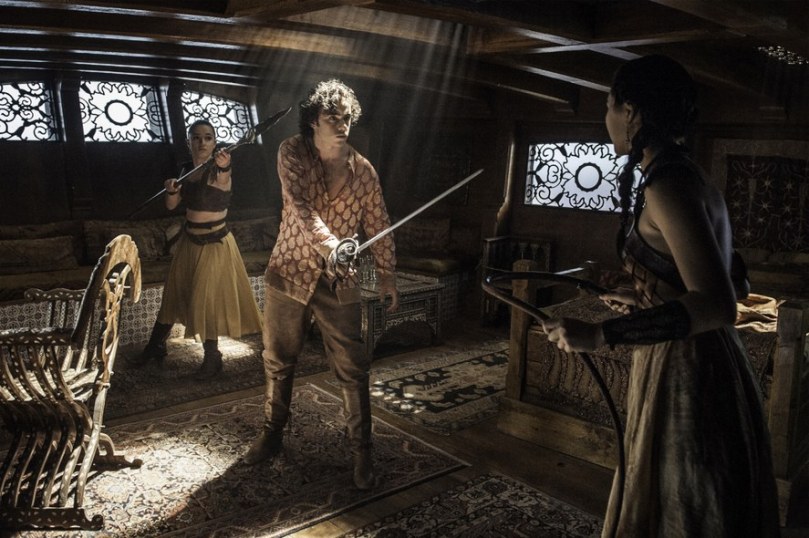 He is weak.  Weak men will no longer rule Dorne.  -Ellaria declares re: Trystane (while Doran lies dying)

Doran (Alexander Siddig), his personal bodyguard, and a messenger are killed by Ellaria and Tyene in the water gardens.  Trystane is brutally killed by Obara’s spear (while a bemused Nym looks on) in his chamber onboard a ship.  It ALL happened so fast!  I REALLY wanted to see more of Doran.

You can’t fight an enemy you don’t know.  -Tyrion explains to Varys

Why are the streets SO quiet!?  The smartest guys in the realm have a walk and talk. They come upon a mother begging w/ her baby; she misunderstands Tyrion (Peter Dinklage) when he speaks in Valyrian, so Varys (Conleth Hill) has to help out.

On a wall under “Kill the Masters” someone has scrawled “Mhysa [meaning Dany] is a Master.” Are the Sons of the Harpy former slaves or former slaveholders (masters)?  Hmmm… I think they were slaves; after all, they brutally/quickly killed Hizdahr in S5 E8.)  We see a small group of former slaves who have gathered in an alley where a man dressed in a red robe is preaching re: the Lord of Light.  A few moments later, there is smoke coming from the harbor- ALL the ships have been set on fire.

On the road (w/ a Dothraki horde): 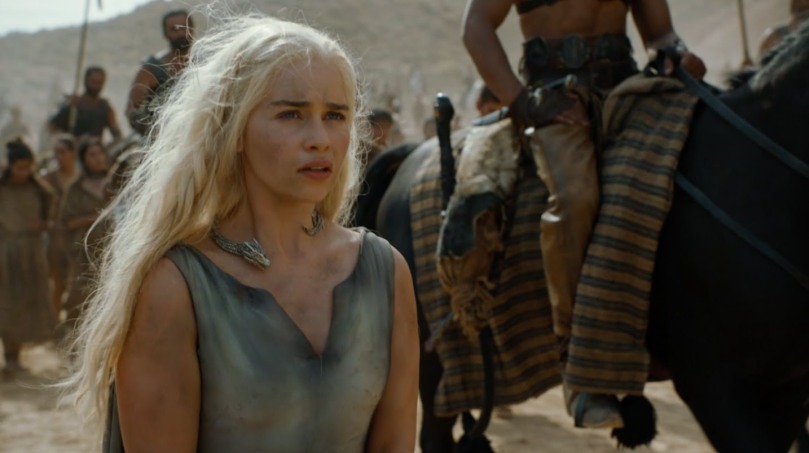 Dany (Emilia Clark) assumed that the Dothraki would be respectful towards her- WRONG!  When the horde that captured her reach Khal Moro, she learns that widows of khals must live out their lives in Vaes Dothrak (“the city of the horse lords”).  Um, why didn’t Dany know this BEFORE!?

Mutton.  I’d like some mutton.  I never was much of a hunter.  -Davos provides a light moment when telling Thorne what he’d like for his journey

You haven’t seen her do what I’ve seen her do.  -Davos tells Jon’s friends in the Night’s Watch re: Melisandre

What to make of that final image of Melisandre transformed into an old woman? Was she a crone in disguise all along? Or had she lost her faith in the Lord of Light?  As Steve Buja wrote in his recap: “Given the blood nature of her god, perhaps one of the components to her witchcraft is her own essence. Whatever happens in this game, Melisandre is the turning point…”

He’s only mostly dead.  [This one’s for The Princess Bride fans!]

Regarding Jon Snow’s fate, I think it won’t be determined until episode 3/4, as I think Dan and Dave want to develop other Stark plot lines, and delve into Arya, Sansa, and Bran.

My current theory: Jon Snow’s spirit is inhabiting Ghost. But he needs a viable human body to warg into, and relatively soon, since to remain wolf too long risks losing the human to the wolf. Melisande is somehow going to donate her vitality to Snow’s corpse and heal it, so Jon Snow can warg back into it. This won’t be easy, of course. A trace of the wolf is likely to remain.

GOT is increasingly a womans’ world, at least plotwise. The men fail to rescue, and at best, like Tyron, strive to serve.

My guess is this new Khal is going to be killed by Drogon, who will obey Dany (for once). This will cow all of the Dothraki because they believe in strength. If anything would make a khalasar follow a woman it would be if she showed she can command dragons. My feeling is that Dany will then lead this khalasar back to Mereen, where she’ll clean out the Sons of the Harpy in short order.

Danaerys being sent to a place reserved for widows of Dothraki leaders. Smells to me like a place where angry women warriors decide to kick ass.  Everywhere Danaerys goes she ends up with an army.

The Melisandre revelation was a bit of a wow, and we got some brief but quality time with Davos and Jorah (whose faces are much more interesting than those of many of the beautiful younger actors). I even felt a drop of pity for Cersei.