This domestic comedy (w/ dramatic themes) is a MUST-SEE for theater fans in the DC area! It’s a powerhouse production (laughter, tears, and VERY timely themes) playing until SUN, 6/19, at the Round House in Bethesda. I was interested in seeing this play from the day that I got the flyer in the mail! My friend (who is Pakistani-American, like the lead characters) and I went to see the 2nd pay what you can (PWYC) show- a SUN matinee. We both LOVED it, as did most of the audience (which included just a sprinkling of POC).

“His [Ayad Akthar’s] characters are well-defined and three-dimensional. His dialogue is nearly peerless in American writing.” -Ryan Taylor (DCTheaterScene.com)

The Who and the What centers on successful, pious, Atlanta businessman, Afzal (Tony Mirrcandani), and his two grown-up daughters: scholarly Zarina (Anu Yadav) and bubbly Mahwish (Olivia Khoshatefeh). Since his wife was lost to cancer many years ago, and he is now retired, his daughters are now his main concern.  Since Mahwish has had a serious boyfriend since age 16, Ali (a Pakistani-American young man from a well-off, local family), Afzal is worried re: Zarina’s singlehood.  He takes some steps to find her a husband (using an online platform, of course) w/o her knowledge. Ayad Akthar was partly inspired by Shakespeare’s comedy, The Taming of the Shrew, and also by the stories of many 1st gen Pakistani-American/Muslim women he knew growing up.

In his search, Afzal finds Eli (Brandon McCoy), who he feels has the right mindset to be a good match for Zarina. Eli MAY seem like an odd choice to a LOT of the audience- he’s a white convert who came to Islam while living in inner-city Detroit w/ activist parents. But he’s also the imam of a humble masjid, very smart, and passionate about putting faith into action (which Afzal admires). 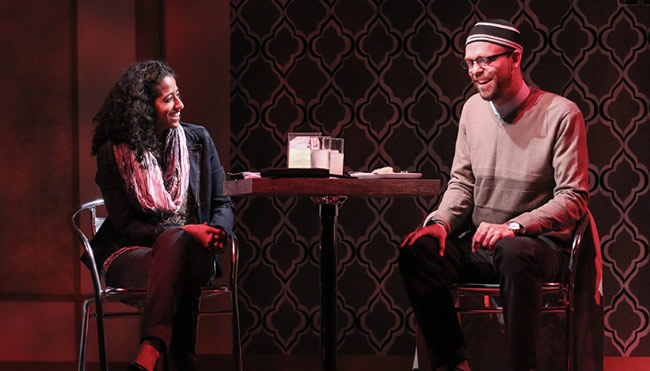 Zarina is amazed and (a BIT) angry when she hears about her father’s matchmaking!  She has ONLY been focused on writing a book for the past 3 yrs, neglecting her personal life. But Zarina decides to give Eli a chance, much to the joy of BOTH Afzal and Mahwish. There is NO denying that they have a LOT in common, which helps create chemistry between the two. Zarina doesn’t intimidate Eli- he is intrigued by her… and her book (though she is reluctant to divulge much info about it).  In the second half of the play, this book’s controversial content will be the main point of conflict between Afzal and Zarina.

Disgraced, for all its brilliance, is a cold piece of work, mechanical in its stripping down of its character’s dignity. The Akhtar of The Who & The What is a gentler sort, more interested in the possibility of his flawed characters finding a little bit of grace and Eleanor Holdridge’s fine production at Round House is one of my favorites of the year.” -Ryan Taylor (DCTheaterScene.com)

Mr. Mirrcandani is a standout here- he is NOT only very adept w/ the text, he ALSO connects to it (unlike what I saw in the recent Arena Stage production of Disgraced). Though there are universal themes in this play, it will have a special resonance for those from Muslim/South Asian/immigrant backgrounds.  “Everyone looked familiar,” my friend commented (wiping away her tears) after the final scene.  I couldn’t agree more!