FYI: The term “black mirror” is a reference to the effect of a TV or computer screen when switched off, giving a dark reflection of the onlooker. (You can read my previous review of Seasons 1 & 2 here.)  If you have a LOT on your current watch list, then check out the two eps below! 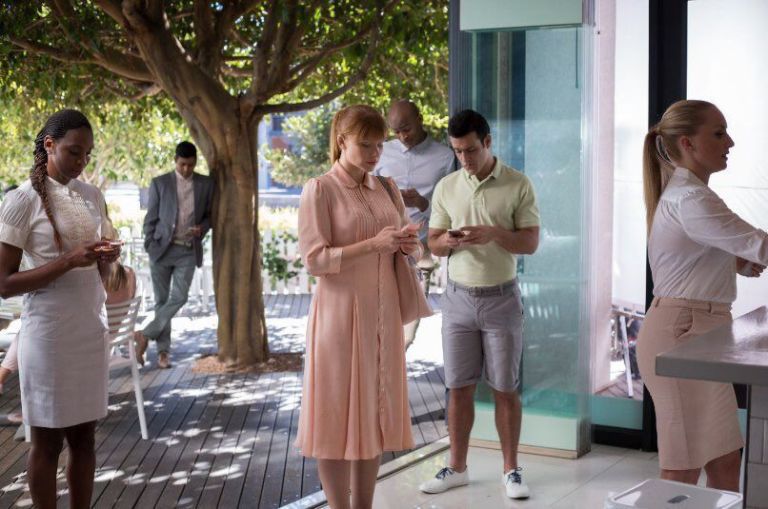 This was my fave ep, besides E4 (see below); it was directed by Joe Wright (Atonement; Pride and Prejudice).  The scenarios depicted are NOT too far from what’s going on in our (current) society, which makes the story funny, relatable, and a BIT scary!  Every interaction (incl. brief chats, purchases, accidental run-ins, heartfelt convos, etc.) is rated by each individual living in this fictional world.

So in terms of quality, you could use a punch up right there. Ideally, that’s up votes from quality people.  -Hansen

It stars VERY likeable American actress- Bryce Dallas Howard (Lacie), Brit James Norton- star of Grantchester (Ryan), another young Brit- Alice Eve (Naomie), and respected American theater veteran- Cherry Jones (Truck Driver).  Lacie, who has a positive/go-getter personality, is working hard to boost her rating, so that she can move into an exclusive housing community.  Her younger/slacker brother, Ryan, thinks that this is a stupid idea (BUT he has a mediocre rating).  Lacie constantly compares her rating and posts to others in her social circle, esp. Naomie (a conventionally pretty childhood friend).

Black Mirror has been a great show from the start; for me, it’s main draw is the human stories it focuses on in the midst of some mind- blowing technological what-ifs. Although in other episodes, it has focused on the darker side of technology, this one focuses on how technology could connect people instead.  -Excerpt from IMDB review

I consider this episode to be a movie. It felt like one. The lighting, music, choreography and acting gave it a vivid tone which truly involves the viewer. It felt like more than an hour run but didn’t drag on one bit. -Excerpt from another IMDB review

This is THE ep for those of you who love romance, time travel (I’m a big fan of Quantum Leap), &/or the 80s- fashion, hair, & music (here is full list of songs).  There is a fun fashion montage that is influenced by Robert Parker’s song Addicted to Love (I learned that from a pop culture podcast, though it did look familiar when I saw it).  The lead characters are shy/socially awkward Yorkie (Canadian MacKenzie Davis) and vivacious/outgoing Kelly (British-Nigerian Gugu Mbatha-Raw, most recently in Free State of Jones).  BOTH actresses did great in their roles, BUT I’m a big fan of Mbatha-Raw (her character has more of the emotional heavy lifting to do in this story).  This is a character-driven story and it takes time to get to know what exactly is going on.  Nothing is spoon-fed to the viewer!