Hey readers (are there MANY out there?)  If you are reading, please put in comments!

I went to MoMA this evening with two of my (younger) gal pals; I also met a few other (very sweet) college folks.  Most of these college undergrads/recent grads had gone to Stuyvesant High School.  Currently, I’m teaching a SHSAT prep class at South Asian Youth Action (SAYA!).  The students (7th-8th graders) are hoping to get a high score on the SHSAT, so they can attend Stuy, Brooklyn Tech, Bronx Science, or another specialized high school here in NYC.

The museum was abuzz with languages (not unusual); the Dali exhibit was especially popular.  It was COOL to see many young people interested in art; some were not yet in college!  I noticed that several were artists (sketch pads in their bags) and photographers (with nifty cameras).  There were many tourists from Spain also.  I REALLY liked a some of Dali’s stuff, especially the paintings where he used (shades of) blue and red in abundance.  Not everything he did was disturbing, as I discovered.  Many people said the work was “curious” though.  A lady (most likely a tourist from out of state) was frustrated when she couldn’t figure out the painting the book turning into a nude woman.  “Where is the woman?” she asked her husband, then some other people around us.  “I don’t see it.  I see a book.  It’s supposed to be in there, but I don’t see it!”  LOL- My friend and I had to laugh!  I liked the painting “Narcissus” (maybe because I like Greek mythology).  On one side, you see the figure of the young man, then the flower on the opposite side.  The colors were cool, too. 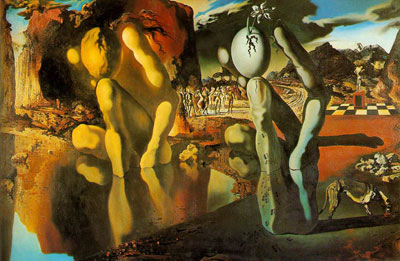 I found out a few NEW things from this exhibit. Dali collaborated not only with the famed Spanish director, Luis Bunel, but with Alfred Hitchcock!  Hitchcock chose Dali to create the dream sequences seen in Spellbound (starring Gregory Peck and Ingrid Bergman).  I told my mom about this, and she thought it was very cool (she LOVES 1940s films, especially Spellbound).  The producer, David O. Selznick, thought that Dali’s ideas were TOO extreme, but Hitchcock thought the artist would bring something out of the ordinary to this 1945 picture. 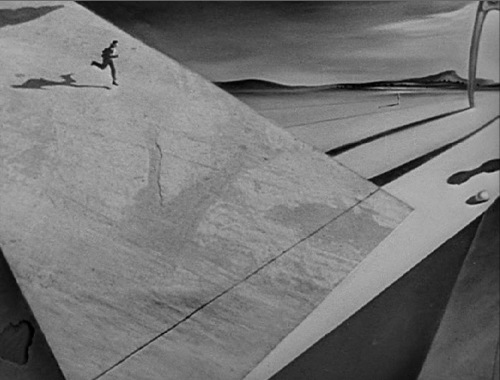 Dali was friends with Luis Bunel, Frederico Garcia Lorca, the Marx Brothers, and Andy Warhol.  I recall some stuff about Garcia Lorca because my final project in an advanced Spanish class (WAAAAY back in undergrad) was to research his life and work, then give an oral presentation.  The teacher and few other students said I did a REALLY good job!  A surprising thing about Garcia Lorca: he didn’t live “in the closet;” he was “out” and open about his life as a gay man (when it wasn’t the norm).  This reminded me of Oscar Wilde who lived part of his life as an “out” man (with the support of his mother, no less)!

Okay, I’m going off-topic too much.  You should check out the Dali exhibit when you have a chance.  Fridays are FREE (so there are MANY people there).  The line moves FAST after 6pm, one friend said.  It was quick today around 4pm.   It was CRAZY hot and humid today, so it was good to be doing something INSIDE!

One thought on “Emma at MoMA”