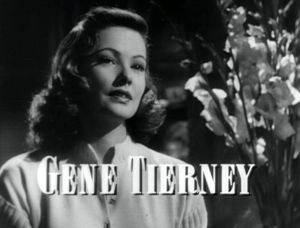 Her youth and beauty, her poise and charm of manner captivated them all. She had warmth, vitality. She had authentic magnetism. Wherever we went, she stood out. Men admired her; women envied her.

Waldo Lydecker (Clifton Webb) describes businesswoman Laura Hunt (Gene Tiermey) in glowing terms to Detective Mark McPherson (Dana Andrews) after her (presumed) death.  Lydecker is an influential, wealthy, sharp-tongued, witty columnist in NYC.  He narrates part of this 1944 film noir, and for the first half of the film, he creates for the audience a picture of Laura.  She was gorgeous, mysterious, confidant- the type of woman that men dream about.

How singularly innocent I look this morning.

Lydecker served as her mentor, and they spent the past 5 years together.  What was the nature of their relationship?  He is imperious, but effeminate in manner- looks non-threatening to the audience. 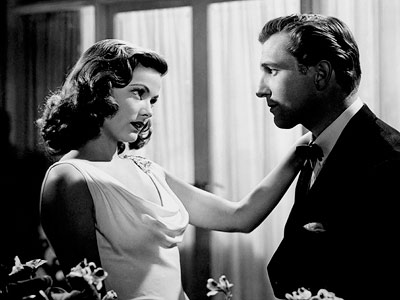 Because of Laura’s status and the terrible manner of her death, the media flocks to the doorstep of her 5th Ave apartment.  Though Waldo (a man in his 50s) was close to Laura, she was engaged to the charming, handsome, easy-going Shelby Carpenter (Vincent Price).  Shelby is very friendly with Laura’s wealthy, widowed, middle-aged aunt, Ann Treadwell (Judith Anderson).

Waldo, who often tags along with Mark during his investigation, warns the detective.

You’d better watch out, McPherson, or you’ll finish up in a psychiatric ward. I doubt they’ve ever had a patient who fell in love with a corpse.

McPherson is a tough, no-nonsense cop who’s not fazed by dealing with society people; he keeps calm by playing with a little handheld game.  He goes over her apt, her letters, and diary.  Laura’s portrait fascinates and unsettles him.  This is not just a typical murder case to him! 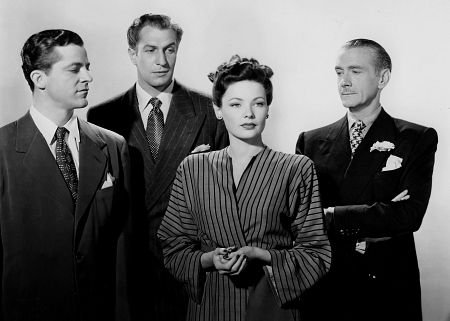 Since Laura is a murder mystery, I don’t want to give too much away.  However, I can tell you that it’s a film worth watching.  You won’t see some surprises coming!  The dialogue is sophisticated and entertaining.  The characters are distinct, interesting individuals.  I especially liked Vincent Price’s performance; he seemed very modern and realistic as a down-on-his-luck Kentucky playboy.  Judith Anderson has a great scene where she describes why they are suited for each other.  Clifton Webb has a lot of terrific lines in the film; he reminded me of Oscar Wilde’s writing.