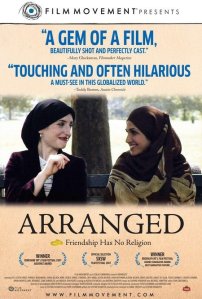 This is a 2007 indie film I came across at Blockbuster 2 wks ago.   The movie was shot in NY and NJ with unknown/little known actors.  This film is based partly on the experiences of one of its producers- an Orthodox Jewish woman.  It’s a refreshing picture about how modernity AND tradtion can coexist in America.

The film follows  two smart/articulate/pretty young women recently out of college, Rochel (an Orthodox American Jew) and Nasira (a Syrian American Muslim).  Both ladies come from caring traditional families, work at a public school in Brooklyn, and are in the process of getting arranged marriages.

Rochel (Zoe Lister Jones) and Nasira (Francis Benhamou) have more in common than meets the eye, and they eventually become good friends.  Their friendship causes many raised eyebrows, but the girls grow to rely on each other.  The dialogue is very realistic and the main characters are enjoyable to watch.  I learned a few things while watching this movie, too. You should check it out, if it’s available in your area!

The Making of Arranged: