I saw this film last week and REALLY enjoyed it!  It’s a fun, fast-paced, and smart spy thriller.  I’m not going to reveal TOO much about it, b/c you should see for yourself.

Leonardo DiCaprio stars as Roger Ferris- a young CIA operative based in the Middle East.  (Leo’s hair is dyed dark brown, he sports fluffy facial hair, and speaks w/ a North Carolina accent.)  Not only is Ferris fluent in Arabic, he’s knowledgeable about AND respectful of the ways of the Arab world.  In the opening of the film, Ferris is being assisted by a local (a young family man) in getting intel about terrorist activity in Iraq.

His DC-based boss is Ed Hoffman; Russell Crowe gained about 30 lbs for the role.  Unlike Ferris, Hoffman plays politics, enjoys manipulating others, and is highly prejudiced against the Middle East.  Hoffman constantly talks about ending the war on terror by any means necessary, but Ferris isn’t always comfortable with all his tactics.  Sometimes Hoffman ignores Ferris’ info and shoots off w/ his own plan!  You’ll get a kick out of how Hoffman goes about his daily life in suburbia (family dinner, car pool, soccer games, etc.) while making life/death decisions on the phone w/ Ferris.

While in Amman, Jordan, Ferris develops a keen interest in an (unconventionally) pretty nurse, Aisha (Golshifteh Farahani, a big star in her native Iran).  Though this part of the movie seemed contrived to many reviewers, the two actors have good chemistry.   Also, we get to see a sweet, respectful, budding romance between a Christian and a Muslim (very rare in Hollywood)! 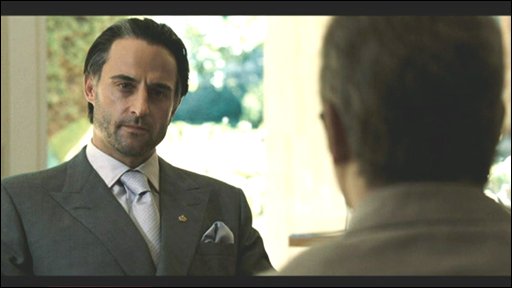 In my opinion, the main reason to see Body of Lies is Brit actor Mark Strong (who played Mr. Knightley in the A&E version of Emma).  Strong (who is actually of Italian and Austrian heritage) plays Hani Salaam, the sharply-dressed, well-spoken, and enigmatic head of Jordanian intelligence.  Hani prefers to use “punishment” instead of “torture” to get info from suspected baddies; Ferris feels bad about this.  Strong has a terrific accent suiting his character; Hani is portrayed as intelligent, arrogant (he’s of high status), and funny in a  sly way.  He’s far removed from the Arab Muslim Holywood stereotype, thank goodness!