This is my favorite Spike Lee film (aside from Malcolm X); I’ve seen it several times.  Lee’s premise for making this film: romantic relationships between blacks and whites are (sometimes) based more on curiosity than love.   He didn’t make the central couple (black architect Flipper Purefoy and Italian American temp Angie Tucci) very interesting, Roger Ebert said in his TV review.  However, the people in the communities they come from are VERY well done, he complimented.  I agree with Ebert b/c I wanted to know more re: the lesser characters!

Flipper (Wesley Snipes) lives in a Harlem brownstone w/ his statuesque biracial wife Dru, a buyer for Nordstrom (Lonette McKee) and young daughter.  In the opener, he seems to have a loving relationship w/ Dru and his little girl (who he walks to school in the mornings).  A source of stress is his job- he’s the only black architect in his firm.

Flipper is visibly upset when his former secretary (a black woman) is replaced by a white temp, Angie (Annabella Sciorra).  “I specifically asked for a woman of color!”  Flipper exclaims to one of his bosses (played by Tim Robbins).  Even though things start out awkward, Flipper and Angie have a good working relationship.  They often work late, share takeout, and get to know each other.  One night, Flipper catches Angie admiring his dark skin.  She says “it’s beautiful.”  Though he has NEVER cheated on his wife, they begin an affair (right on the drafting table)!

Flipper eventually confesses to his best pal/upstairs neighbor Cyrus (played by Lee himself) that though he considers himself “a strong black man,” he was “curious about what it would be like” to be with a white woman.  As they are talking, Flipper’s older brother Gator (Samuel L. Jackson) and his girlfriend Viv (a very young and unglamorous Halle Berry) approach.  It’s obvious that Gator is a long-time crack addict, as is his “new lady.”  (Sam Jackson said that his OWN drug addiction in the ’80s helped him portray Gator in a VERY realistic manner.  Producers thought Jackson was a REAL crack addict when he did his screen test, so he had to come in AGAIN to explain it was just acting.) 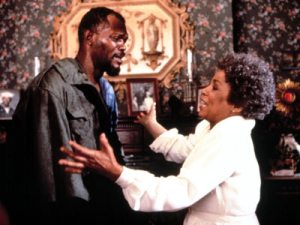 Lucinda Purefoy (Ruby Dee) can’t refuse giving her addict son money when he comes around, no matter how hard she tries.  Gator invents lame excuses to get a few bucks out of her whenever his father is not around.  The father, a VERY religious man called The Good Reverend Doctor (Ossie Davis) has cast Gator out “like the Devil.”  (I REALLY felt for the mother and her dilemna; if she didn’t give Gator money, he’d surely go out and steal it.)

My favorite character is candy shop/newsstand manager Paulie Carbone (John Turturro).  He’s a hardworking/unassuming guy who dated Angie since high school (“b/c he’s from the neighborhood.”)  His overbearing/widower father (Anthony Quinn) has retired from the shop, but micro-manages everything his son does.  Paulie has a crush on Lauren, a young black executive who comes to the store for papers each morning.  She sees him as a friend, and encourages him to apply to Brooklyn College.  The unemployed/Italian American/racist local guys who frequent his store think of all this as a joke.  Paulie is an outsider in his environment, and you wonder if he can get the life he wants. 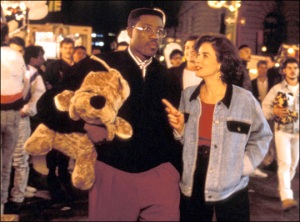 On one date, Angie asks Flipper “So what are we doing here?”  I think they’re taking a break from their everyday lives.  But their actions have consequences- Dru (along w/ her girlfriends) is VERY upset by her husband’s betrayal.  Angie’s father reacts w/ shocking violence.  After the famous girl-talk session (about color, dating, black  men, etc.), Dru quietly tells her pals: “It really doesn’t matter what color she is- my man is gone.”

The main characters in Jungle Fever feel unappreciated, I noticed during this viewing.   Angie works all day, then cooks her for father and brothers w/o complain.  Paulie has put his dreams on hold to look after his father and the shop.  Flipper doesn’t get the promotion, so he resigns from his job.  Lee (who grew up in Bensonhurst when it had a large community of working-class Italian Americans) shows us that two people are NOT the only ones involved in a realtionship.  Personal relationships include family, friends, and (sometimes) the community-at-large.  Everyone has SOMETHING to say about Flipper and Angie’s affair, including an angry young waitress at a soul food restaurant (Queen Latifah in a brief, yet memorable, role).