Most kids/teens I’ve known DON’T want to follow in the footsteps of their parents.  They want to see what ELSE is out there.  Maybe they fear comparison?  In Hollywood, an actor can be typecast just like that.  It is crucial to get work (only about 3% of actors are currently work in their chosen business), BUT also important to keep your head on your shoulders.  Below are some show business families who are making it work, both on and offscreen!

Actor Lloyd Bridges (1913-1998) co-starred in classic Westerns (like “High Noon” w/ Gary Cooper and Grace Kelly), worked on successful comic films and various TV series (Sea Hunt, Seinfeld, etc.) and perhaps most remarkable of all- raised a family under Hollywood’s glare.  He and his wife Dorothy (deceased as of February 2009), an actress and poet, had a long marriage and 3 children.  Lloyd Bridges’ acting ranged from very natural to comic.  He was even considered for the role of Captain Kirk on the original Star Trek TV series!

“My dad was sort of the front man – he was out there getting public attention. But my mom was behind the scenes, sort of holding the whole thing together…  She was such a creative person and inspired us all to be creative,” Jeff Bridges said about his parents.

Though the Bridges family has an “All-American” image, Lloyd Bridges’ career was in jeopardy when he became involved with the Communist Party in the 1950s.  Later on, he helped found a theater in the Catskills Mountains; he and his wife met in college and started their careers in theater. 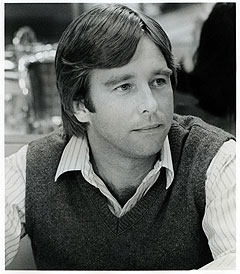 Beau Bridges may be known to younger audiences as a pleasant, father-figure in recent TV movies/series.  As a young man, he was a NBA hopeful, served 8 years in the Coast Guard, and starred opposite many other respected actors.  Like his father and younger brother, he has the ease of a natural actor.  If Beau is in a movie, he”ll certainly class it up!

Okay, I realize that the above picture is cheesy, but it’s also SUPER-HOT!  Jeff Bridges is an actor that I NEVER get tired of seeing!  He is the Hollywood total package: tall, great hair/smile/body AND the ability to pull viewers in (“the X factor”).  Pauline Kael, a very noted AND tough film critic, called Jeff’s acting “natural and believable.”

Not many guys can stand up to a powerhouse like Barbra Streisand!  In interviews, Jeff seems like the quintessential easygoing Californian.  Like his clan, he has a GREAT love for the environment, swimming, and surfing.  Jeff is also a capable horseman; you can see from some of his films.

Jeff has been in big budget and small/quirky films throughout his long career.  He played a youthful/charming president opposite Joan Allen in the political drama, The Contender.  Probably the coolest film prez since Morgan Freeman…  Most fathers want their sons to surpass them, and arguably Jeff has done just that!

He had a co-starring role in the NBC legal drama, Conviction.  Though this NYC-based  series was short-lived, Jordan’s character was quite interesting.  He played a young, wealthy, and sheltered ADA from the Upper East Side.  Instead of joining his family’s firm, this young attorney wanted to serve the public.  Crime hit home when he gets robbed and  badly beaten just a few blocks from his old neighborhood.

Kirk Douglas has had a fascinating life.  He is the American-born son of immigrant Russian Jews.  His parents were illiterate, he grew up very poor, and worked from a young age.  It’s noted that he got into college b/c of his wrestling skills and smooth talk/charm.  These qualities didn’t hurt in Hollywwod either!

Douglas worked in the “golden age” of Hollywood, so when you watch his acting, it looks effortless.  Amazing for his day, he NEVER got typecast!  His slightly unusual (yet still handsome) looks and strong screen presence opened the door; Douglas played heroes, villains, and characters with various shades of gray.

In a documentary film, Michael Douglas (who shares a strong physical resemblance to his father) admitted to being apprehensive about following in his father’s footsteps.  Instead of simply auditioning for leading-man roles, he tried out for character parts that would enable him to distinguish himself from the strong pack of male actors of late ’70s and ’80s.

If you look closely, you see that BOTH father and son play strong-willed/determined men characters especially well.  Also, there is ALWAYS an air of mystery about these actors!   Next up for Michael: a sequesl to the hit film, Wall Street.

Veteran Brit actor James Fox was born into an acting family.  He is perhaps known to American audiences from The Remains of the Day (opposite Anthony Hopkins and Emma Thompson), Anna Karenina (opposite Sophie Marceau and Sean Bean), and various lavish period dramas.  Like many of his generation, he started in the theater (as did his elder brother).  He had a quirky role in Charlie and the Chocolate Factory (opposite Johhny Depp) recently.

There’s probably little sibling rivalry since BOTH brothers have been awarded the Order of the British Empire!  Edward is known for his TV work (Daniel Deronda), but he also appeared in The Bounty, Gandhi, Nicholas Nickelby, etc.

Laurence Fox is one of  MANY fine young (just 31 y.o.) Brit actors working today.  Like his father and uncle, Laurence has a tall (6’3″)/lanky build and a way with cool/cerebral characters.  The actor has tackled quirky roles with grace and sensitivity, such as that of the repressed, yet oddly sympathetic, Mr. Wisley (Becoming Jane).

Laurence has appeared in Gosford Park and guest-starred on a variety of UK series (including Foyle’s War).  He also got married 2 yrs ago (to singer/actress Billie Piper) and is the father of a baby son.  Currently, Laurence plays DS James Hathaway, the brainy/mysterious partner of the title character in Inspector Lewis. 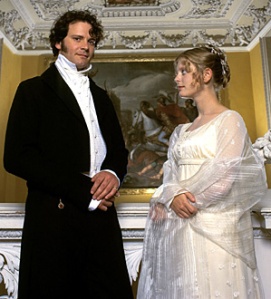 Emilia Fox (now age 35) will forever be loved by fans of the 1995 BBC Pride & Prejudice miniseries.  She played the waifish/sweet/shy Georgiana Darcy, the devoted little sister of Mr. Darcy (Colin Firth).  Emilia has been acting consistently since leaving Oxford; she met her hubby while working in a play.  Next up for Emilia: Dorian Gray (opposite Ben Barnes and Colin Firth, her P&P big brother).

Veteran actor Sam Waterston is known throughout the world as no-nonsense ADA (now DA) Jack McCoy on the original Law and Order TV series.  In the ’90s, he played some memorable film fathers (The Man in the Moon opposite a VERY young Reese Witherspoon and the TV series I’ll Fly Away.)  However, there is much more than meets the eye to this fine actor.

Waterston has a penchant for playing bright, forthright, and honorable individuals; he attended prep school, Yale, and the Sorbonne.  He gained experience in the theater before films/TV.  In 1973, Sam acted opposite Hollywood legend Katherine Hepburn in The Glass Menagerie.  In 1974, Sam co-starred with Mia Farrow and Robert Redford in The Great Gatsby; he was the thoughtful/observant narrator, Nick Carraway.

Sam played a real-life journalist in the critically acclaimed 1984 film, The Killing Fields.  His family can traced back to the Mayflower; he has worked on several projects about Abraham Lincoln.  Besides being a great actor, I like how Sam Waterston chooses intelligent and though-provoking projects!

Father & son after a Broadway play

James is primarily a theater actor on the East Coast.  But he has also guest-starred on several Law & Order shows.

Katherine has a role in Taking Woodstock, the new period family drama/comedy directed by Ang Lee.

I heard this young actress, recently out of college, on a radio interview a few months ago.  She commented how Sam chose to raise his family out in the country to keep them away from the drama of NYC or Hollywood.  She played Miranda, the innocent teen daughter of Prospero (Mandy Patinkin) in a new version of The Tempest on Broadway.  Elisabeth received good reviews.

"The Tempest" opposite Mandy Patinkin