I recall first watching this film in 1995 during a high school English class.  It was on this past Sunday, so I checked it out again.  It’s full of action, stunning natural beauty (it was filmed in North Carolina), gorgeous music, and is very well-acted.

The hero is Nathaniel Poe (Daniel Day-Lewis, one of the finest actors of his generation), also known as Hawkeye, a white orphan adopted by a Mohican chief named Chingachgook (Russell Means) and raised alongside his own son Uncas (Eris Schweig).  Nathaniel is an expert marksman, tracker, and quite friendly w/ some of the white colonists (such as the Cameron family) of this wild frontier.  But he’s his own man, proudly saying that he’s “beholden to no one.”

Things change when the French and Indian War begins in 1757; the colonists are bound by law to join the militia and aid the British troops.  The men fear for their families.  What will happen if their wives and children are attacked while they’re away fighting at Fort William Henry?  Jack Winthrop, one of the young settlers and Nathaniel’s friend, goes to Albany to voice this concern.  General Webb grants the men permission to leave the militia if their homes are in danger.

Meanwhile, Cora (Madeleine Stowe) and her teen sister Alice (Jodhi May) are traveling to see their father, General Munro, at the fort.  They are accompanied by family friend, and Cora’s suitor, Major Duncan Hayward (Steven Waddington), more than a dozen soldiers, and a stoic Mohawk guide named Magua (Wes Studi).

All hell breaks loose when Magua (who is actually a Huron allied w/ the French) attacks the soldiers.  He’s then joined by more Huron men.  Chingachgook, Uncas, and Nathaniel rush in for the rescue.  When Magua takes aim at Cora, Nathaniel wonders why. 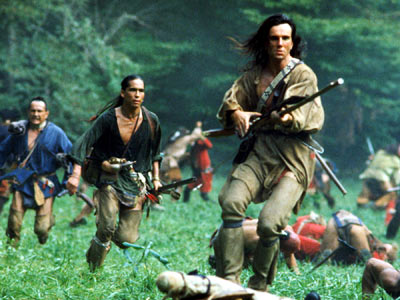 This film looks very authentic.  Day-Lewis is in top form for the very physically demanding role, as are the supporting actors.  Though this film was catagorized as a romance, I wished there had more a little more instead of the fighting.  Both Nathaniel and Cora (outspoken/determined) have a sense of nobility about them.

Nathaniel is larger than life-selflessly fighting for love of his father, brother, and Cora.  He’s also a romanticist-at one w/ nature, independent-minded, and noble in thought and action.  On the opposite end is Magua- a fallen warrior who’s “heart is twisted,” and fighting for revenge.  Both are formidable and memorable.