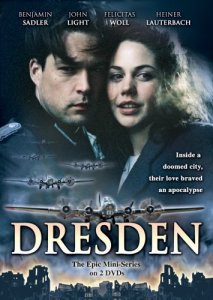 As you may recall, John Light’s lawyer character in the 2004 BBC miniseries, North & South, was thwarted in love.  Margaret chose Mr. Thornton over Henry Lennox.  In 2006, the Shakespearean-trained actor co-starred in a terrific miniseries set in WWII; it was the most expensive German film made for TV.  It was shot on location in the gorgeous city of Dresden, which suffered from (unnecessary) bombings in 1945, near the tail end of WWII.  As the director says, it’s an antiwar movie; it doesn’t glorify either the Brits or the Germans.

Anna Mauth (Felicitas Woll) is a 24 y.o. German nurse who planned to go to med school, but stayed home to help her father, the director of the local hospital.  She is pretty, hardworking, and full of life.  At the start of Part 1, Anna bravely assists Alexander (a young doc/her long-term bf) in the operating room while air raid sirens wail in the background.  Anna empathizes w/ Maria, her best friend/fellow nurse, who is married to a Jewish man.  She is worried about her (“patriotic”) younger sister, who is dating an official of the Third Reich.

Robert Newman (John Light) is a British bomber pilot who has to bail out of his Lancaster when engines catch fire.  He parachutes down into a field where he and his comrades are attacked by a group of very angry men.  Robert just gets shot in the stomach.  He finds shelter in a shed, removes his jacket, dog tags, and other signs of being British.  Robert dons a rough, long coat and heads toward Dresden.  Along they way, he sees many refugees.  He sneaks into the hospital while the staff are busy handling many incoming wounded soldiers.

This film has it all- family,  romance, mystery, and action.  It is simply riveting, mainly b/c of the four leads’ convincing performances, high production value, and (some scary/realistic) special effects.  Viewers will quickly relate to Anna- a wonderful character who tries to do the right thing.  Woll and Light (who speaks mostly German here) have great chemistry together.  They communicate volumes w/ just their eyes and expressions!