What qualities makes one a “gentleman” or “lady?”  Is one’s identity determined from birth, or can it change?  These are the questions at the core of Catherine Cookson’s The Glass Virgin.  As a child in 1870s England, Annabelle LeGrange is sheltered by her mother and servants.  One day, her curiosity leads her to see something long kept hidden.

During a trip into town, Annabelle is rescued from a runaway coach by a young outsider, Miguel Mendoza (Brendan Coyle).  Seeing his strength, Mr. LaGrange offers him a job.  Miguel, who is actually Irish, says he’ll only work w/ horses.  In time, he teaches Annabelle to ride, and they become good friends.

The 17 y.o. Annabelle (a young Emily Mortimer) flees from her life of upper-middle class comfort when her true parentage in revealed and her “father” arranges a marriage to be rid of her.  Annabelle’s only ally is Miguel, who insists on traveling w/ her to find another life.  The pair find work on a small farm, then a bigger one run by a good-hearted, fair-minded family.  They say they are cousins and live as such, never as a couple.

Over the course of one tough, life-changing year, Annabelle learns and matures into her own person.  She teaches Miguel to read, and says that he has a lot of potential.  He falls in love w/ her, but keeps it hidden, as her station in life was so above his.  Can Annabelle marry a working-class man?  What will she do when called back to her mother and old way of life?

This film is not very well-made and had a low budget; it was a TV miniseries.  There are no frills, some bad (wooden) acting from supporting players, and weird transitions.   Most of the dialogue is very simple.  (Honestly, I watched it just b/c Brendan Coyle was in it.  He does a great job, as usual!)  Emily Mortimer, who was a newcomer to film then, takes some time to grow into her role.

Some viewers thought it was weird that an older friend from childhood became a love interest.  (But wait, what about Emma and Mr. Knightley?  He was 16 yrs older than her.)  Those who read the novel noted that Miguel was only 10 yrs older than Annabelle.  I had a Renaissance Lit prof who said that “we shouldn’t put the values from our modern world onto the past.” 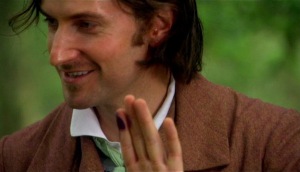 This is one of the most gorgeous films I’ve ever seen!  (It ranks up there w/ A Walk in the Clouds, which Rogert Ebert praised as the “type of movie you’d want to live in.”)  It’s actually a 3-part miniseries, has a strong ensemble cast, and is a true story.

The elderly Claude Monet (Julian Glover) talks about his life, and that of his fellow Impressionist painters, to a reporter.  The younger Monet (Richard Armitage) left home, served in the army, then went to Paris to study.  At the school, he met the wealthy/jovial Renoir (Charlie Condou) and doctor-in-training- Bazille (James Lance).  They chafed against their “old school” teacher’s methods and eventually went off by themselves to paint.  As we know, Monet was inspired by the outdoors (nature) and always sought to “capture the light.”

The young artists deal w/ money troubles, various romances, government art critics (that seek to protect the image of “good art”), and their own frustrations.  There are stories about quirky painters, such as Cezanne- a hermit who’s actually from a wealthy family.  There are interesting tales behind famous paintings.  Did you know that the woman in the green dress became Monet’s first wife?  He approached her in the marketplace and asked to paint her portrait.

Monet’s second wife (played by Amanda Root) was the former wife of his benefactor.  At first, she didn’t see what was the big deal about his work- LOL!  One reason that I liked this film was that two of my fave actors were playing a couple.  (Below is an Impressionistic promo pic w/ RA and Root.)

If you haven’t yet, watch RA and Coyle together in the 2004 BBC miniseries North & South!  Here is a short clip:

You can watch the entire film here: