But you must give him some sign, Mr. Trask, some sign that you love him… or he’ll never be a man.  All his life he’ll feel guilty and alone unless you release him. 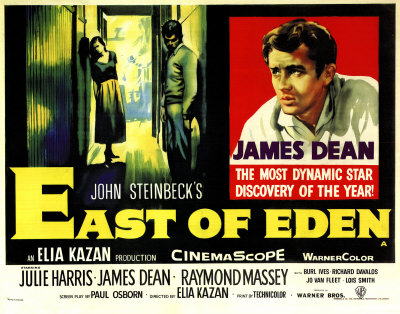 Aron’s girlfriend Abra (Julie Harris) is a pleasant/kind girl who finds Cal frightening at first, then slowly gets to know (and even sympathize) with him.  The setting, early 20th century Salinas valley of California, is “ironic” in this film because of the conflicted people (critic Kenneth Turan noted).  Cal believes Adam only loves Aron.  He (instinctively) finds out about his long absent mother, Kate (Jo Van Fleet).  Adam is described as “kind” and “conscientious” by his friends/neigbbors; Kate is a former “drifter” who is running a “sinful” house (where men drink, gamble, etc.). 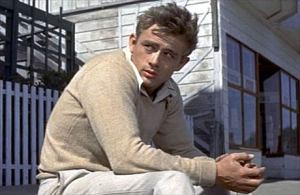 East of Eden contains (obvious) biblical themes; Cal and Aron are compared to Cain and Abel at one point.  This film contains universal themes and intruiging characters who don’t always act how you expect; for example, Aron is strongly against fighting (WWI).  Viewers of his time must’ve been surprised by Dean’s performance, but he’s not unlike today’s  teenagers who are trying to prove their worth and and fit in.