This is a must-see film from 2009, esp. for fans of classic country music and Jeff Bridges, who completely disappears into his role of alcoholic/world weary/singer-songwriter Bad Blake.  Gone is the easygoing California-bred star; here Bridges is overweight, terribly dressed, and quite cranky (for most of the film).  The 57 y.o. Bad (his preferred nickname) has been reduced to performing in bowling alleys and hole-in-the-wall bars throughout the Southwest.  He hasn’t written a song in 3 yrs.  He’s under the power of his fave brand of whiskey for most of the day (and night).  But most sadly, he has become a disappointment to himself.

But he still has many fans out there, including a young arts reporter from Santa Fe, Jean Craddock (Maggie Gyllenhaal).  Bad agrees to an interview w/ Jean; they have an easy rapport from which a romance quickly develops. 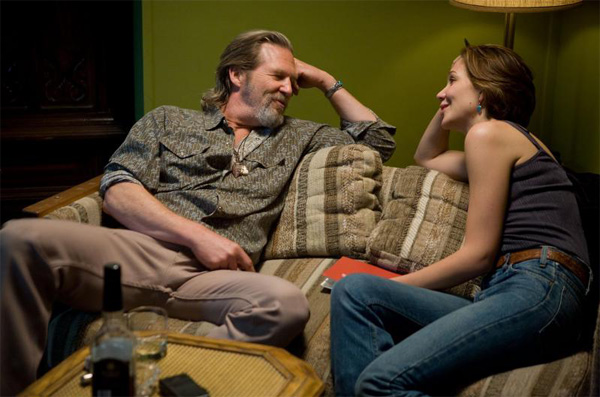 Jean has an adorable 3 y.o. boy, Buddy, who is very excited to meet Bad and spend time w/ him.  This is not the only kid in Bad’s life…

Bad needs to earn some real money, so he turns to country star Tommy Sweet (Colin Farrell).  Tommy, a very thankful protege, would love to get some songs out of his mentor, but Bad is not sure he has it in him anymore.

Bridges is very watcheable (a character actor w/ a star’s looks, charisma, and confidence), bringing non-showy authenticity to the role.  He can sing very well, too.  My fave songs from Crazy Heart are Hold on You and I Don’t Know (2 versions sung by Bridges and Ryan Bingham, the young singer-songwriter who makes a cameo).

Bad is the main character of a novel by Thomas Cobb.  His personality is a mix of Merle Haggard, Waylon Jennings, and Kris Kristofferson.