SPOILERS: Don’t read this review if you have not yet seen or don’t want to know details from the latest episode of Game of Thrones.

I will answer injustice with justice.  -Daenerys tells Ser Barristan after the slave city of Meereen is freed

Dany (Emilia Clarke) is badass here!  She’s going Old Testament (“an eye for an eye”) by having 163 of the slave masters crucified.  In the previous ep, we learned that this number of slaves marked the way to Meereen.

I liked the scene between Grey Worm (Jacob Andersen) and Missandei (Nathalie Emmanuel).  I hope they’re going to become friends (or maybe more?) in the future.  But I still need more Jorah (Iain Glen)!

You were his first choice.  He [Tyrion] named you as his champion, because he knew you’d ride day and night to come fight for him.  You gonna fight for him now?  -Bronn tells Jaime

The roguish, yet effective, Bronn (Jerome Flynn) just gets the best lines!  And who didn’t love the (slapstick) scene where he beat Jaime with his own golden hand!?

You really asking if I killed your son?  -Tyrion says to Jaime

You really asking if I’d kill my brother?  -Jaime replies

“The Kingslayer brothers” sounds catchy, right?  Peter Dinklage shows his leading man chops in this scene (as Roger Ebert said of his performance in The Station Agent).  See his eyes?  He’s so into the character!  Nikolaj Coster-Waldau continues to show more shades of Jaime.

A man with no motive is a man no one expects.  If they don’t know who you are or what you want, they can’t know what you plan to do next.  So many men, they risk so little.  They spend their lives avoiding danger.  They they die.  I’d risk everything to get what I want.  -Littlefinger explains his motive for helping to kill Joffrey to Sansa

And what do you want?  -Sansa asks nervously

Everything.  -Littlefinger replies, sliding a hand down her arm

Let’s face it, we missed Littlefinger (Aiden Gillen)!  Who knows what he’ll get up to next?  And it looks like naïve/young Sansa (Sophie Turner) is finally getting how devious/dangerous he can be!  I loved the “Who’d trust you?” line!

The following morning, Luther never made it down the stairs to propose to my sister, because the boy couldn’t bloody walk.  And when he could, the only thing he wanted was what I’d given him the night before.  I was good.  I was very, very good.  -Lady Olenna admits how she seduced her future husband, who was a better choice (for her) than a Targaryen

You don’t think I’d let you marry that beast, do you?  -Lady Olenna (nearly) confesses to Margaery re: killing Joffrey

Awww, Lady Olenna (Diana Rigg) is prepping to leave King’s Landing!  But, she still has some words of wisdom for granddaughter, Margaery (Natalie Dormer).  What weapons can a mere woman use in Westeros society?  Her body, of course!  And Margaery’s got wit, charm, and cleverness (thanks in part to Lady Olenna).

That will be all, Lord Commander.  -Cersei coldly dismisses Jaime

After that scene in the sept, what can we say re: Jaime and Cersei (Lena Headey)!?  It’s a very touchy subject.  Many viewers were deeply disturbed by how Jaime forced himself on Cersei.  George R.R. Martin blogged that “I didn’t write the scene that way.”  It was the choice of the showrunners and the director.  This show operates in shades of gray, keep in mind!

We see Cersei drinking (not a shocker) and generally being bitter and formal with her twin.  Jaime is confused and hurt.  They are officially broken up now.

Before we spend our lives together, we ought to get to know one another.  –Lady Margaery says to Tommen, the young king-to-be

This scene could’ve been creepy, but Margaery kept it sweet and innocent.  And how cute a name is Ser Pounce!?  Tommen (Dean-Charles Chapman) seems like a great little guy- so unlike Joffrey (thank the Old Gods and the Seven). 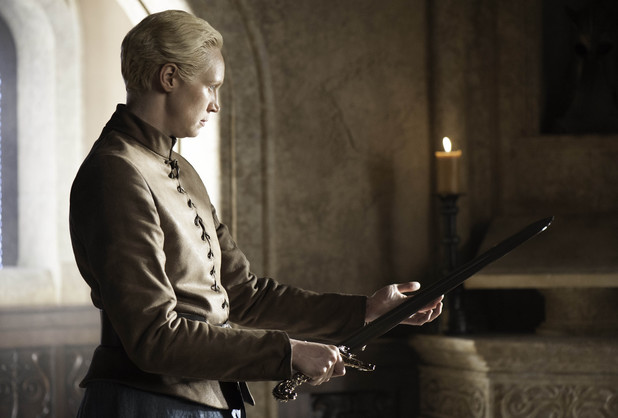 I’ll find her [Sansa] for Lady Catelyn… and for you.  -Brienne says to Jaime after he gives her his Valyrian steel sword and presents her with a new suit of armor

Brienne (Gwendolyn Christie) is very humbled and surprised when Jaime gives her his sword.  He explains that it was forged from Ned Stark’s sword, so it’s fitting that she use it to protect Sansa.  Maybe Brienne will meet Arya, too?  That would be cool!

They say the best swords have names…  Any ideas?  -Jaime asks Brienne before she departs (w/ Pod as her squire)

Dressed in her new armor, Brienne looks more formidable than ever, but there is vulnerability in her eyes.  She and Jaime exchange some wistful looks before she rides off.  Is this romantic love?  No, I think it’s something beyond that.  They just seem to get each other, though one of them is a tarnished knight, while the other is pure of heart and still honorable.  Though she doesn’t use that title, Brienne is the classiest “lady” in the realm!

Not sure what’s going to happen with Jon, Sam, the psychotic brothers at Crastor’s Keep, and Bran’s crew.  I’m esp. worried re: Meera- being a young woman in that place (shudder)!  Did you see Locke (Noah Taylor) among the new recruits of the Night’s Watch?  He’s one sneaky guy; he gets chummy with Jon right away.