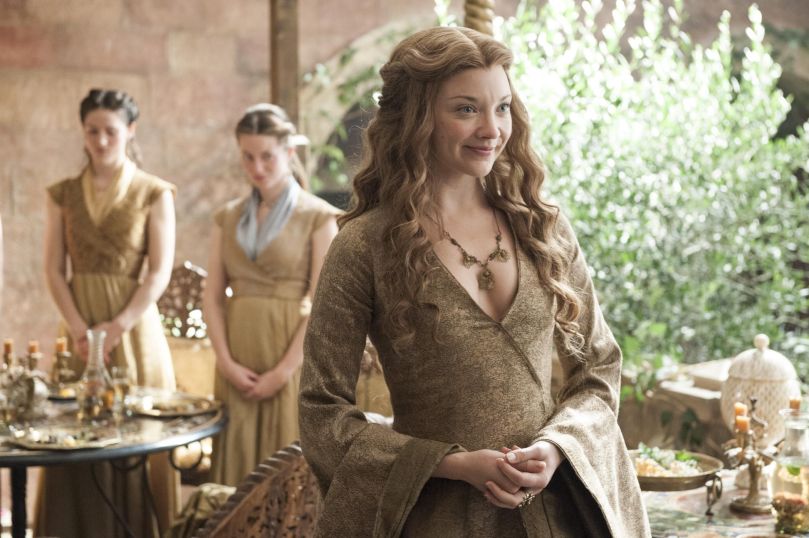 SPOILERS: Don’t read this review if you have not yet seen or don’t want to know details from Season 5, Episode 3 of Game of Thrones.

What is the proper way to address you now, Queen Mother or Dowager Queen?

The alternate title of this scene could’ve been “Queen Margaery For the Win.”  She passive-aggressively asks Cersei a few questions the day after her wedding night w/ Tommen, surrounded by her retinue of young attendants.  And that dig about the wine was SO apropos… and funny!

Cersei’s face said it all, BUT she had to swallow her anger.  As Nina Rastofi (Vulture) wrote: “Is there anything scarier (or better) than Lena Headey’s fake-Cersei smile? It’s like she just pulls the edges of her mouth back and bares those chompers in order to distract you from her dead, cold, eyes. It’s a masterful face performance.”

So, you were administering to these devout prostitutes?

LOL!  Qyburn (skeptically) asks the High Septon when the religious leader comes to complain to the Small Council re: his treatment by the Sparrows in the streets.  He may NOT be a real maester, BUT Qyburn is becoming one of my fave characters on the show.  You MUST wonder what in the name of Frankenstein he’s doing w/ The Mountain!

Hypocrisy is a boil.  Lancing a boil is never pleasant.

The High Sparrow (Jonathan Pryce, a veteran of theater/film) explains to Cersei when she goes to visit him in his (smelly) part of town.  I was BIT surprised to hear that Cersei had the High Septon thrown in jail for his behavior.

The faith and the crown are the two pillars that hold up this world. One collapses, so does the other.

Cersei explains the importance of BOTH government and religion to the High Sparrow.  Hmmm… will he be an ally for Cersei?

On the road/The North (Winterfell):

He didn’t love me!  He didn’t want me!  He danced with me because he was kind.  He kept me from being a joke… from that day until his last day.

Brienne of Tarth (FINALLY) tells the origin of her devotion to Renly Baratheon.  This was a GREAT scene (that almost had me teary-eyed)!  The actor who portrays Pod did a good job w/ the way he was listening to Brienne speak.

Nothing’s more hateful than failing to protect the one you love.

Brienne concludes the scene, and we can tell from her eyes that she’ll do anything to revenge Renly’s death.

That marriage proposal… it wasn’t for you.

Sansa says to Littlefinger (Well, what  sort of behavior did you expect from a pimp!?) when they stop on the road to Moat Caillin, which is now held by Bolton bannermen.  In my mind, I shouted “NOOOOOO!!!”  Poor Sansa- she has been promised to Ramsay Bolton (shudder), now legitimized by Roose,The Warden of the North.

Stop being a bystander, do you hear me? Stop running. There’s no justice in the world. Not unless we make it. You loved your family. Avenge them.

Well, Lord Baelish (Littlifinger) isn’t completely wrong.  Sansa’s best way to get revenge would be getting close to her enemies by using her beauty, manners, etc.  After all, she can’t fight with swords (like Arya and Brienne), BUT she has learned a LOT from being at court and traveling w/ Littlefinger.

The best way to forge a lasting alliance isn’t by peeling a man’s skin off. The best way is marriage.  -Roose Bolton explains to his son Ramsay

I need her name, not her virtue.

Roose Bolton (I LOVE this actor’s voice!) flatly tells Littlefinger re: Sansa.  I liked ALL the interactions between Michael McElhatton and Aiden Gillen; their characters are like two (rotten) peas in a pod.  The main difference- one uses his sword the other uses his words.

Oooh, I LOVED this little scene w/ Sansa and the elderly maidervant who shows her to a chamber!  Now that she’s back in her home territory, Sansa has supporters (though she may not know them yet). 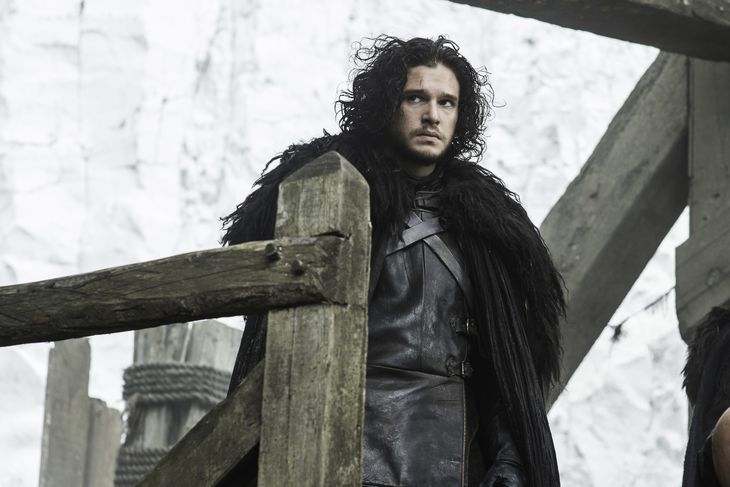 The North (The Wall/Castle Black):

You’re as stubborn as your father, and as honorable.  -Stannis
I can imagine no higher praise.  -Jon
I didn’t mean it as praise. Honor got your father killed. -Stannis

You have to like ANY scene that mentions Ned Stark!

I heard it was best to keep your enemies close.  -Jon

Whoever said that didn’t have many enemies.  -Stannis

Stannis suggests that Jon send Ser Alistair Thorne as far away as possible.  Ser Davos (Liam Cunningham gets a meaty scene- FINALLY) later tells Jon that Stannis sees something in him.  Stannis’ respect for Jon is growing, as we learn from that silent nod after Jon executes Ser Janos Slynt (YAY!!!)

Someone who inspires priests and whores is worth taking seriously.  -Varys

We saw a new place this ep- Volantis (home of the deceased Talisa, wife of Robb Stark).  Slavery is common, as Talisa explained before.  There is another Red Priestess and (a VERY popular) pro with hair and dress like Dany.  At the final scene, Ser Jorah Mormont (Iain Glen- LOVE him!) kidnaps Tyrion is such a smooth/expert way!