SPOILERS: This post contains major spoilers from the season finale of the show.

I killed your High Sparrow and all his little sparrows, all his septons, all his septas, all his filthy soldiers, because it felt good to watch them burn. It felt good to imagine their shock and their pain. No thought has ever given me greater joy.  –Cersei explains to Septa Unella

As some critics/fans commented, Cersei is now “stone-cold”- nothing seems to phase her, NOT even hearing of Tommen’s suicide!  She has taken the Iron Throne after murdering her husband (w/ the aid of her cousin), seeing her son (Joffrey) poisoned, and now Tommen’s sudden demise.  MANY of her enemies are dead, BUT her only allies are The Mountain, Qyburn, and her twin brother (though I wouldn’t be 100% sure about that, seeing Jaime’s expression in the final scene in the throne room). 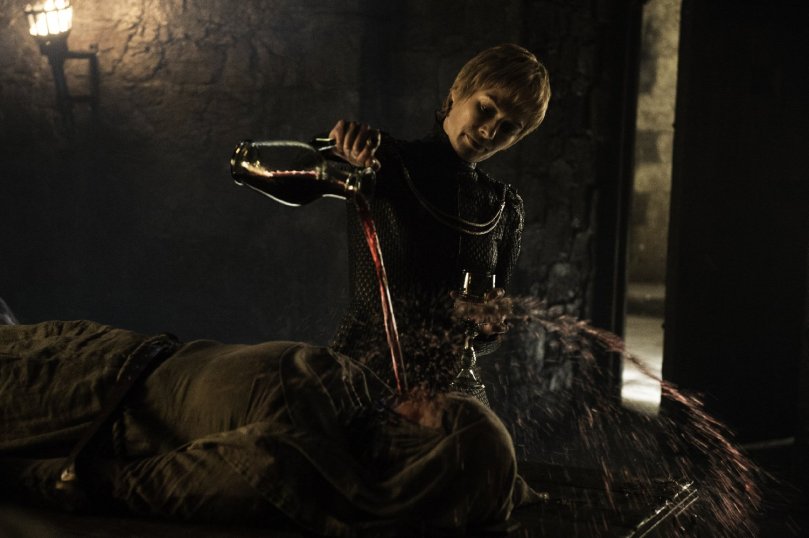 You are to me.  -Sansa replies

This was just a quiet, yet wonderful, scene between the two sibs (or cousins, as we learn in the flashback scene). BUT, many of you (incl. those in the Sistah Speak Game of Thrones Facebook group) thought that Sansa MAY be jealous of Jon, so NOT 100% in his corner. I want to give her the benefit of the doubt (for now); I don’t think that she will go along w/ Littlefinger’s plans. 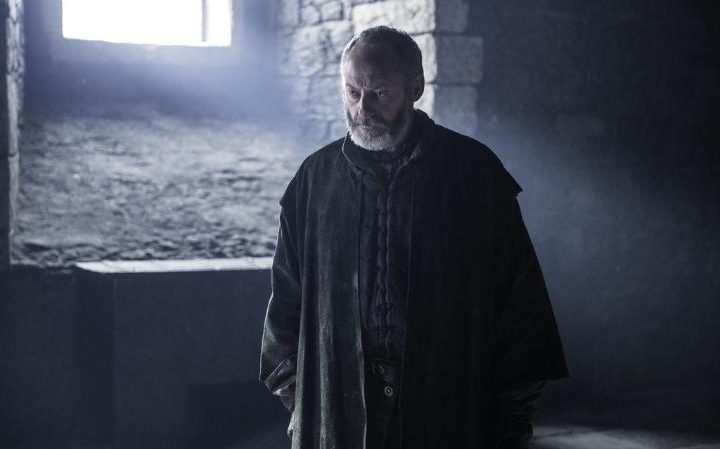 If he commands you to burn children, your Lord [the Red God/the Lord of Light] is evil! -Davos shouts at Melisandre

I LOVE me some Davos, so I was V disappointed that he didn’t get to wring Mel’s neck, or burn her up, or stab her w/ his sword!  (OK, I’ll stop now, b/c don’t want to scare readers away- LOL.)  Mel is exiled from The North by Jon; you can tell that he was a BIT conflicted about that (she having brought him back from the dead and all).  Hmmm… wonder what will happen to Mel next season? 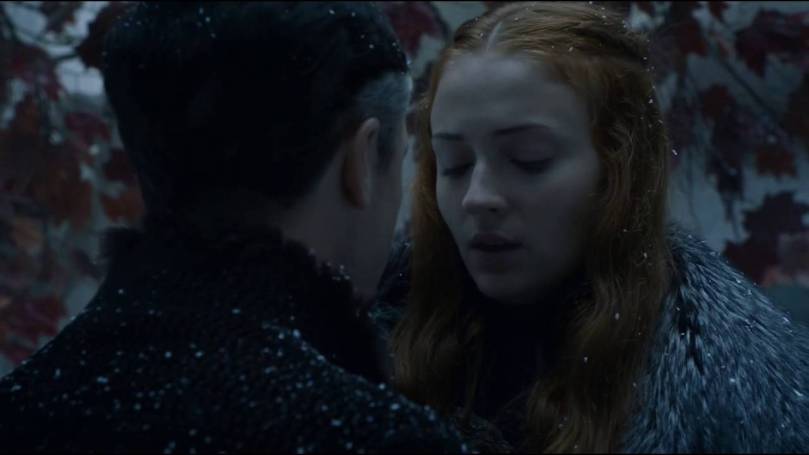 Every time I’m faced with a decision I close my eyes and see the same picture. Whenever I consider an action I ask myself, will this action help to make this picture a reality, pull it out of my mind and into the world? And I only act if the answer is yes. A picture of me on the Iron Throne and you by my side.  -Littlefinger admits to Sansa

As Peter Sagal (Nerdette Game of Thrones Recaps) pointed out, this is the FIRST time that we hear (from his own mouth) exactly what Littlefinger wants!  We know that he loved (or was obsessed w/) Sansa’s mother, Catelyn.  That same feeling was transferred to Sansa, much to her surprise/confusion/dismay, BUT this now gives HER some power.  Hmm… what will Sansa do in order to keep Littlefinger on a tight leash?  She does NOT trust him, as she tells Jon, BUT they do need the support of the lords of The Vale.

The war is not over.  And I promise you, friend, the true enemy won’t wait out the storm. He brings the storm.  -Jon Snow explains to Lord Manderly (and the other Northern lords)

Sure, Jon is a bastard, BUT he has a LOT of courage and fighting experience.  Also, he has the blood of Ned Stark , so seems to have earned the respect of these Northmen.  The BEST part of that storyline was Lady Lyanna Mormont declaring her support for Jon- what guts and screen presence!

The last thing you’re ever going to see is a Stark smiling down at you as you die.  –Arya declares to Walder Frey

After the Frey pies scene, Sagal had a valid joke/comment: “When did Arya have time to learn to cook?”  LOL!  This scene brought to mind Julie Taymor’s movie adaptation of Shakespeare’s tragedy, Titus Andronicus.

I’ve been a cynic for as long as I can remember. Everyone’s always asking me to believe in things: family, gods, kings, myself.  It was often tempting until I saw where belief got people.  I said no thank you to belief.  Yet here I am.  I believe in you.  -Tyrion reveals to Dany

Were you feeling a BIT emotional when Dany pinned that brooch on Tyrion?  I was, for sure!  Looks like she has the smartest advisor in the Seven Kingdoms, along w/ 3 dragons, over 1,000 ships, the Unsullied, etc.  Maybe it takes a Lannister (Tyrion) to defeat a Lannister (Cersei)?

And where would we be w/o a BIT of humor?

But wouldn’t you say life is irregular?  -Sam attempts to banter w/ the clerk at the Citadel

Sam presents the letter from Jon, then has to tell the facts of what happened at Castle Black in recent years (deaths of Lord Cmdr. Mormont and Maester Aemon).  He is amazed by the spectacular library- awww!

You don’t even have to do anything, do you?   You just sit there, a rich slab of beef, and all the birds come pecking.  -Bronn comments to Jaime re: his power over women

Jaime is in a bad mood, BUT Bronn always has something funny (yet apropos) to say.  What will Bronn’s role be in the next season?  I hope that he gets to see some action/prove himself in a fight (NOT just be there for comic relief). 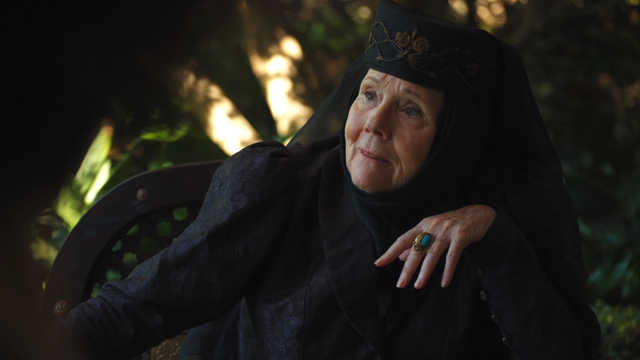 Oooh, watch out Cersei, Lady Olenna (all in black) is out for revenge!  House Tyrell is dead, as are her son and grandkids, Margaery and Loras. She has the Martells as allies, along w/ Varys (who is one of her kindred spirits).  What a (pleasant) surprise to see Lord Varys after a LONG time!